Celebrities, as anyone who has ever passed a magazine stand at the checkout knows, are always on the verge of divorcing. Brad Pitt and Angelina Jolie veer toward the off-ramp to splitsville at least once a month, or whenever tabloids aren’t selling so well. The Beyonce and Jay-Z rumor mill churns so hard, it could crush diamonds. Now that George Clooney and Amal Alamuddin have been wed long enough to have their wedding pictures sold for charity, we should expect to see rumors of the demise of their marriage any day now.

But be warned, ye Cassandras, Clooney and Alamuddin have gone about getting married in the way that sociologists say leads to a lower likelihood of divorce.

Clooney is 53, Alamuddin 36. That’s higher than the average age people get married (for men it’s 29, and women it’s 27, although this is Clooney’s second marriage.) There’s a pretty strong correlation between the age at which you get married and the likelihood that your marriage survives, says Sawhill. “Later marriages are more durable than earlier ones,” she writes. “The most recent data suggest that it is best to wait until your mid-twenties, and better still your early thirties, if you want to reduce the risk of divorce.”

This may seem obvious, but in the U.S. it’s not. The average age at which women get married is now higher than the average age at which women have their first baby, notes Sawhill. Marriages that happen after children have a high rate of failure, especially if the children were unintended. Some studies show that in poorer families, who are often delaying marriage because they don’t feel they’re financially stable enough, a child is welcomed and “highly valued,” as Sawhill puts it. However, she notes “about four in ten [of these relationships] will have ended before the child is age 5.”

Both Clooney and Alamuddin have similar interests and come from similar socio-economic backgrounds. Alamuddin’s mother was a journalist, Clooney’s dad was an anchorman. Alamuddin has way more formal education than Clooney, who never finished college, but seems to have picked up some useful skills. “The tendency of the well-educated to marry each other,” notes Sawhill is “what scientists call ‘assortative mating.”” Those relationships have proved to be the most stable.

Clearly Clooney’s wealth dwarfs Alamuddin’s, but she’s not without means. In any case, wealth — not crazy money, but a lack of need — tends to produce more stable families, or at least poverty produces unstable ones, especially if there are kids involved. This is such a big predictor of marital stability that sociologists are not quite sure if richer people have more stable marriage or whether more stable marriages produce better wealth.

Clooney, you may have noticed, dated a lot of women before marrying Alamuddin. He even lived with some of them. But the relationships never just slid into marriage because they had nowhere else to go. Alamuddin and Clooney had only been dating for about a year when they got married, and only about six months before they got engaged. This is in contrast to many families which are founded out of convenience or lack of choice. “The less privileged …are drifting into relationships they did not plan and frequently cannot maintain,” writes Sawhill. Those who carefully choose their spouses and delay starting a family until they have chosen one, tend to stay married.

Of course, these trends may fade to meaninglessness in the blinding glare of living in the public eye, which, if the reality shows are to be believed, is not very easy on newlyweds. Nevertheless, we’re sure nobody is hinting at a Clooney-Alamuddin rift yet. Or are they? 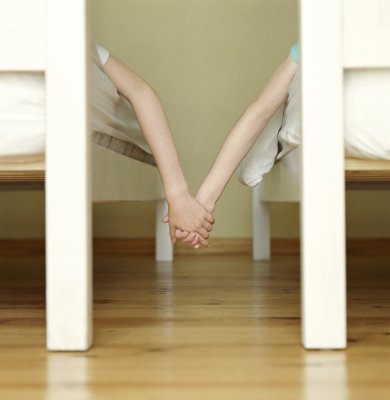 How Sleeping in Separate Bedrooms Could Save Your Relationship
Next Up: Editor's Pick