The White House issued a statement of support for “the aspirations of the Hong Kong people” on Tuesday, in response to a petition urging the U.S. government to put pressure on the Chinese government.

The Obama Administration’s comments reflect a gradual toughening of its response to Beijing, as the Chinese Communist Party refuses to heed Hong Kong protesters’ loudening call for free and fair elections amid swelling demonstrations in the financial powerhouse.

“The United States supports universal suffrage in Hong Kong in accordance with the Basic Law,” the statement said. It continued that Hong Kong residents should have “a genuine choice of candidates representative of the voters’ will.”

Meanwhile, the U.K. also solidified its position on the side of the protesters; Deputy Prime Minister Nick Clegg summoned the Chinese ambassador in order to convey the British government’s alarm at Beijing’s hardened dismissal of universal suffrage in Hong Kong. The territory was a British colony until 1997.

“It is essential that the people of Hong Kong have a genuine choice of chief executive in 2017, through universal suffrage,” Clegg said, according to Sky News. Clegg also said he would “reiterate our position and seek reassurances from the Chinese government.”

Tens of thousands of people have flooded several of Hong Kong’s busiest districts, pledging to continue bringing traffic and commerce to a standstill until the Hong Kong and central governments meet two demands: Hong Kong’s top leader resigns, and Beijing grants the Special Administrative Region the right to freely elect a new one in 2017, as opposed to choosing from a list of candidates handpicked by a pro-Beijing committee.

The Chinese government has repeatedly accused the U.S. and British governments of meddling in its affairs and stirring up the protests; both countries’ officials have denied any involvement.

The original petition had asked the White House “to support Hong Kong democracy and prevent a second Tiananmen Square [massacre] in Hong Kong.” If a petition on the White House website collects more than 100,000 signatures within 30 days, it necessitates a response from the U.S. government. The petition boasted 196,942 signatures before it closed.

“We believe that an open society, with the highest possible degree of autonomy and governed by the rule of law, is essential for Hong Kong’s stability and prosperity,” read the response.

The statement also reiterated White House comments made on Monday, urging “Hong Kong authorities to exercise restraint, and for protesters to express their views peacefully.”

Since police lobbed 87 tear-gas canisters at protesters bearing nothing but umbrellas on Sunday evening, the number of officers on the streets has been drastically scaled back, while the number of protesters, galvanized by the disproportionate response, has burgeoned.

At demonstrations outside a flag-raising ceremony on Wednesday to celebrate China’s National Day, protesters said they were intent on remaining peaceful, while also staying put until their demands are met.

“We will not stop them from celebrating,” said T. Wong, 35, a protester standing under a swarm of umbrellas near the ceremony. “But as they celebrate, we want them to listen to our voices.” 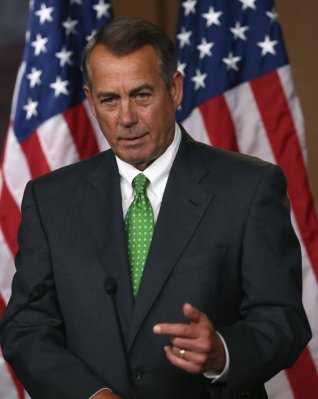 Boehner: U.S. May Have to Send Troops to Fight ISIS
Next Up: Editor's Pick