A protester holds up a placard that reads "Peace Is Our Greatest Weapon," outside the venue of the official flag-raising ceremony for celebrations of China's National Day in Hong Kong on Oct. 1, 2014
Tyrone Siu—Reuters
By Charlie Campbell

Chaotic scenes stole the show from the pomp and spectacle of Chinese National Day celebrations in Hong Kong on Wednesday, as thousands of pro-democracy demonstrators harangued dignitaries and set up camp on the fringes of the city’s politically sacrosanct Golden Bauhinia Square.

Protesters in jeans and sneakers, many of whom had been on the streets all night, heckled a parade of the city’s oligarchs and tycoons as they attempted to enter the Hong Kong Convention and Exhibition Center for ceremonial speeches.

At one point, the crowd, some wearing gas masks, linked arms and bellowed “Down with the Chinese Communist Party!” and “We want universal suffrage!”

Simon Lee, 28, an IT worker, said he felt no love for China’s ruling party and felt more Hong Kong than Chinese. “Everyone agrees we are from Hong Kong,” he said.

Hong Kong has been given a broad degree of autonomy since the end of British colonial rule in 1997. But this sophisticated, freewheeling city of 7 million is deeply suspicious of Beijing and unable to freely choose its own leader.

Calls for democratic reform have built to a crescendo over the last five days, with tens of thousands of protestors bringing several downtown locations to a standstill.

Demonstrators aim to force Hong Kong’s leader, Chief Executive Leung Chun-ying, to resign, and are calling for the Chief Executive to be elected by a popular vote in 2017.

Beijing has agreed to elections but only if the candidates (a maximum of three has been set) are first vetted by a 1,200-strong committee largely perceived as loyal to the mainland.

Such a caveat undermines the entire principle of the vote, say democracy activists, who have vowed to paralyze the city through a campaign of civil disobedience in order to foment change, braving police batons, tear gas and pepper spray.

Their movement has been dubbed the Umbrella Revolution after the umbrellas that demonstrators use to shield themselves from pepper spray.

“The Umbrella Revolution only has one ultimate goal: to have true democracy in Hong Kong,” said one protester.

Other attendees toasted the “security and stability of Hong Kong,” while a patriotic song celebrating “Hong Kong’s close ties with the motherland,” in the words of the MC, was played in the lavish hall without irony.

The theme of this year’s celebrations was declared to be “Chinese Dreams.”

Outside, tens of thousands of Hong Kongers rouse from their slumber, ready for another day’s protest in pursuit of dreams of a very different kind. 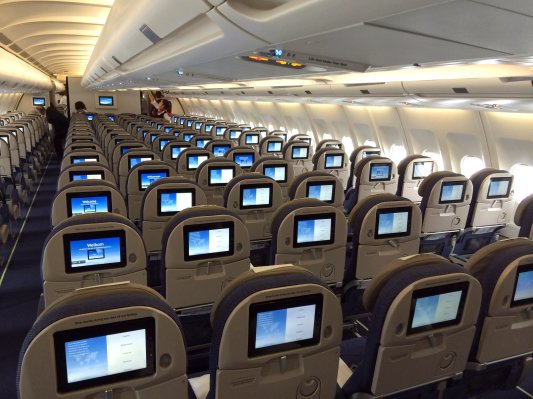 How to Get to Monrovia and Back
Next Up: Editor's Pick