Meet the Clinton Baby's Other Grandparents

Even before Charlotte Clinton Mezvinsky headed home from the hospital on Monday, we had seen the first photos of her with her “over the moon” new grandparents, Bill and Hillary Clinton. But where were the machatonim?

In case you’re wondering, machatonim is a Yiddish word that describes a relationship for which there is no equivalent word in English: the parents of your child’s spouse. And in the case of the Clintons, the machatonim are two longtime friends and allies: Marjorie Margolies and Edward Mezvinsky.

Marjorie is a women’s rights activist and former Congresswoman from Pennsylvania who served a momentous single term in 1993-95 after her deciding vote for the Clinton budget cost her her seat. She ran but lost in the Democratic primary this spring, despite vigorous support from both Clintons. Her former husband, Edward Mezvinsky, served two terms in Congress from Iowa — but also served fived years in prison after being convicted of fraud in 2001. They were divorced in 2007. So maybe their low profile is understandable.

“We are totally delighted,” Marjorie told TIME. What matters this week, anyway, is the relationship of the Clintons and the Margolies-Mezvinsky as machatonim — surely a more efficient way to put it than fumbling around awkwardly with phrases like “my daughter’s in-laws.” If Bill and Hillary are newcomers to their heightened status as grandparents, Marjorie and Ed are black-belt machatonim. Between their combined eleven children, they already have 18 grandchildren, thus presenting Charlotte with 18 cousins “who can’t wait to be part of Charlotte’s life,” Margolies says.

It’s often pointed out that the machatonim often become uncommonly close for two reasons: (1) their shared love for the same grandchildren, and (2) because they and the grandchildren are united by a common enemy: the parents.

So now begin the sensitive negotiations that are more than familiar to many grandparents. Which family will Charlotte (and, oh, her parents) visit for Thanksgiving? Or will they split the difference, Solomonically bolting after turkey dinner to commute to the Other Grandparents’ House for dessert? Who gives her the coolest presents? And, most terrifying, which grandparents does she says she loves the MOST? She will say she loves them all, of course. After all, at least genetically, all machatonim are created equal. 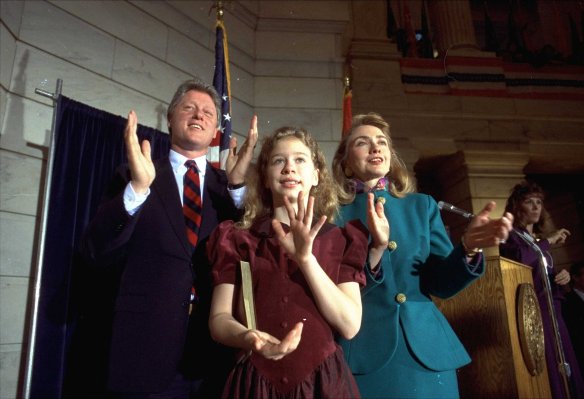 See Chelsea Clinton's Life in Pictures
Next Up: Editor's Pick