Another football “what if” was just answered. In December 2012, after Kansas City Chiefs linebacker Jovan Belcher shot and killed his girlfriend before fatally shooting himself in the head in the team parking lot, you couldn’t help but wonder: could head injuries associated with football have contributed to this horrible act? Aggression and lack of impulse control are known symptoms of chronic traumatic encephalopathy (CTE), a brain disease that had ravaged the brains of over 30 deceased NFL players. A few of them had committed suicide.

Still, you had to approach the question gently, because casually linking the game to Belcher’s actions was irresponsible. Belcher also had “no long concussion history,” the Chiefs said at the time. There was no evidence that he had brain damage.

Until now. Far too often over the past few years, football’s worst fears are confirmed. According to a neuropathological report prepared in the wrongful death lawsuit that lawyers for Belcher’s daughter have filed against the Chiefs, Belcher’s brain showed signs of damage “fully consistent with the pathological presentation of Chronic Traumatic Encephalopathy (CTE) as it is reported in the medical literature.” For example, the research — conducted by Dr. Piotr Kozlowski, dean of research and professor of pathology at the Touro College of Osteopathic Medicine in New York City — says that Belcher had clumps of tau protein in “the 7 out of 7 sections of the right (4 sections) and the left (3 sections) of the hippocampi.” A buildup of abnormal tau levels can cause nerve cell damage in the brain.

Belcher’s body was exhumed a year after his death; his brain showed “severe decomposition,” according to the report. Researchers can only diagnose CTE posthumously. “The quality and quantity are compromised because there was some breakdown of the brain after death and due to the gunshot,” says Dr. Sam Gandy, director of the Mount Sinai Center for Cognitive Health and NFL Neurological Center, who examined Kozlowski’s report at TIME’s request. “But I don’t see any reason to doubt this reading of CTE.”

Belcher is not the first athlete with signs of CTE to act violently. Chris Benoit, a former pro wrestler, killed his wife and son before committing suicide in 2007. The family of Paul Oliver, a former safety for the San Diego Chargers and New Orleans Saints, sued the NFL, the Chargers, the Saints and several helmet manufacturers after Oliver’s 2013 suicide. In an upcoming episode of HBO’s Real Sports, Oliver’s wife Chelsea talks about how her husband abused her. She says he pushed her, kicked her, pulled her hair, and threw her against the wall. One time, she says he dragged her up and down stairs. HBO asked Chelsea if she felt like her life was in jeopardy. “As time went on, I starting thinking about that, yes,” she said. Both Oliver and Benoit had CTE.

After these tragedies, all “what ifs” are on the table. It’s more than fair to ask if the NFL’s two most troubling issues, domestic violence and head trauma, are linked.”You can’t say those brown spots on Jovan Belcher’s brain caused him to do what he did,” says Dr. Julian Bailes, chairman of the department of neurosurgery at the NorthShore University HealthSystem outside of Chicago, who has extensively studied football brain injuries. “But are those brown spots tell-tale signs of a brain injury that influences behavior? With every case like this, we keep upping the ante.”

Scientists are starting to identifying possible ways to spot at-risk players while they’re still alive. Gandy injected a radioactive chemical that sticks to tau into a former NFL player who has suffered cognitive decline: a PET scan picked up the tau buildup, showing pathology consistent with CTE. “We’re still early in our experience, but at a minimum, we can signal to people that they might clinically be showing signs of CTE,” Gandy says. His team just published this neuroimaging technique in the journal Translational Psychiatry.

Bailes has also been working on a PET scanning method to spot CTE in living patients, in conjunction with UCLA researchers. He anticipates expanding it to NorthShore. “While it’s been rewarding to do work on tau,” says Bailes, “it’s gets a little tiring diagnosing patients when they’re already dead.” 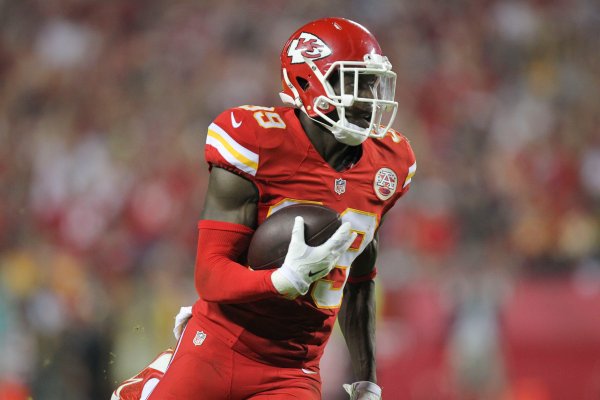 Player Shouldn't Have Been Penalized for Prayer, NFL Says
Next Up: Editor's Pick