Protesters take part of the rally for the beginning of Occupy Central movement outside Central Government Offices on August 31, 2014 in Hong Kong, China.
Lam Yik Fei—Getty Images
Ideas
By Zheng Wang
Zheng Wang is the Director of the Center for Peace and Conflict Studies (CPCS) at Seton Hall University in New Jersey and a Global Fellow at the Woodrow Wilson International Center for Scholars.

Today, students are attempting to occupy the streets outside Hong Kong’s central government complex; 25 years ago, the students occupied Tiananmen in Beijing. However, Hong Kong is not Beijing, and 2014 is not 1989. These similar actions have taken place in entirely different contexts, even though Beijing’s political control is behind both of the events. It is important for us to identify the real sources of the current conflicts in Hong Kong, and not get sidetracked by simple reflections back to Tiananmen.

On the surface, the turmoil in Hong Kong is caused by Beijing’s decision regarding general elections. In reality, the deep sources of the conflict are not so different from the recent large-scale outbreaks of social tensions in Xinjiang, Tibet, and Taiwan. These tensions should not be seen as isolated political battles with Beijing, but rather should be heard as both the battle cry of China’s new identity crisis and a conflict of globalization. For these places, globalization has to some extent become “Chinaization” or “Mainlandization.” These recent events can be explained by the globalization theory “Jihad vs. McWorld.” This theory describes globalization as dialectical interactions between modern commercial fundamentalism and traditional parochialism. It argues that the expanding global commerce and the corporate control of the political process has weakened the autonomy and power of local communities, threatening the identity and culture of the smaller communities while at the same time leading to the reassertion of ethnic and religious identities.

In Hong Kong we can see clearly the effect “McWorld” has had, even though the further integration with mainland China brought prosperity to the city. But most of the advantages and profits produced by this process have gone to business tycoons and corporate elites. Much like the American rallies against the “1%” in recent years, the remaining grassroots population experiences the problems that this success has brought.

Due to the arrival of large numbers of newcomers and the flow of outside capital to Hong Kong, the real estate market has skyrocketed, pricing out much of the population while also increasing everyday cost of living. Large numbers of visitors have made the city quite crowded, leading the local people to worry that further integration will threaten their way of living, the identity of the city, and most of all the distinction of Hong Kong from the mainland that they so cherish.

In Xinjiang, Taiwan, and Tibet there is another story of globalization. The Uighurs, Taiwanese, and Tibetans feel they have been marginalized. For the Uighurs population, their response is jihad. In recent years we have seen the violent attacks in Xinjiang and other parts of mainland China. These violent actions can to some extent be seen as local resistance and rebellion in response to this marginalization and threat of identity, though any terrorist actions should be condemned.

Whereas the Hong Kong students went to the street to protest, a group of Hong Kongese business tycoons went to Beijing and met with the Chinese leadership. Beijing was pleased to gain their support. It is similarly common in Taiwan, Tibet, and Xinjiang for elites to have maintained good relations with Beijing. The CCP has garnered support from the successful elites, while keeping their growth tied closely to Beijing. There are many cases of major Taiwanese corporations having relocated their headquarters from Taiwan to the mainland. The huge market the mainland offers has brought enormous profits to the Taiwanese business community. For example, a Taiwanese company in Mainland China manufactures almost all iPhones.

This phenomenon can be explained by another theory of globalization: “integrated on top, collapsed on the bottom.” When the elites of the different regions and industries gain from globalization, they become more united and integrated behind the banner of shared economic interests. On the other hand, even though the living standards of people in the grassroots have been improving in recent years, they have suffered many of the negative consequences of the globalized economy, such as the demise of their established traditions, cultural morality, and identity.

It is in this identity crisis that the different groups have chosen to express their protests. The recent student movement in Taiwan against the Cross-Strait Service Trade Agreement with China has been the Taiwanese response. While the protests in Hong Kong and Taiwan should not be confused for any type of jihad like that of the Uighurs’, they nonetheless underscore common issues. Unfortunately, Beijing is not well versed in handling identity issues. Identity-based conflict is different than interest-based conflict. People won’t change their cultural identity, whether by intimidation or by compensation. Both the proposition of bribes and the threat of use of force often only worsen a situation, as people remain steadfast to their identity. Beijing lacks an understanding of this concept and how to remedy it.

Hong Kong’s problem will continue for as long as the structural sources of conflict cannot be addressed. The identity crises in Hong Kong, Xinjiang, Taiwan, and Tibet will surely become Beijing’s real tests and dilemmas. How well the Chinese leadership deals with these crises will determine China’s rise and future development. From this perspective, the identity issues have a real global impact, as does the street movement in Hong Kong.

Zheng Wang is the Director of the Center for Peace and Conflict Studies (CPCS) at Seton Hall University in New Jersey and a Global Fellow at the Woodrow Wilson International Center for Scholars. 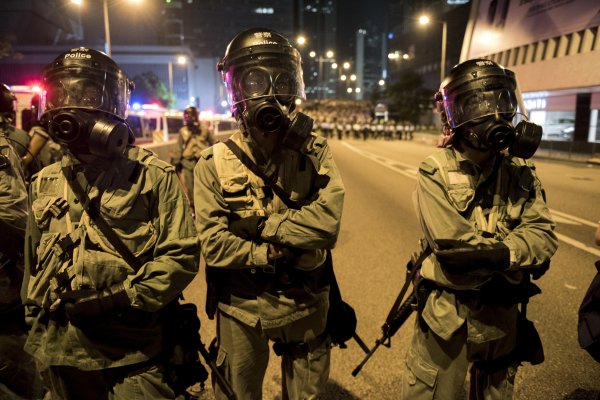 Hong Kong Is Ready for Democracy; China Isn't Ready for a Free Hong Kong
Next Up: Editor's Pick