Taylor Swift, who recently explained how Girls creator and star Lena Dunham helped her realize she was a feminist, is now praising another famous actress for her message of female empowerment.

In an interview with French-Canadian talk show Tout Le Monde En Parle, Swift said that actress Emma Watson’s recent speech at the United Nations’ He for She event will help inspire young girls and help them understand feminism. When asked the intense reaction to Watson’s speech, Swift said spoke about the overwhelmingly positive response she saw from her young, female fan base. She also said that if she had had a strong feminist role model at a young age, she would have declared herself as one earlier:

Swift argues that many young girls, including her younger self, associate feminism with negativity when it simply means equality among the genders.

The definition of feminism has become a hot-button topic among female celebrities this year. Many stars have declared themselves not to be feminists because they “love men.” But others, like Swift, have asserted a simpler definition of feminism that does not involve hating men: for example, in her song “Flawless,” Beyoncé samples a speech from Nigerian-born writer Chimamanda Ngozi Adichie who defines a feminist as “a person who believes in the social, political and economic equality of the sexes.”

In other parts of the interview, Swift offered her views on being a woman in the media:

And when the interviewer asked her about Miley Cyrus’s scandalous outfits (perhaps doing the exact thing Swift hates by trying to pit her against another female singer her age), Swift responded that she supports women singers expressing their sexuality: 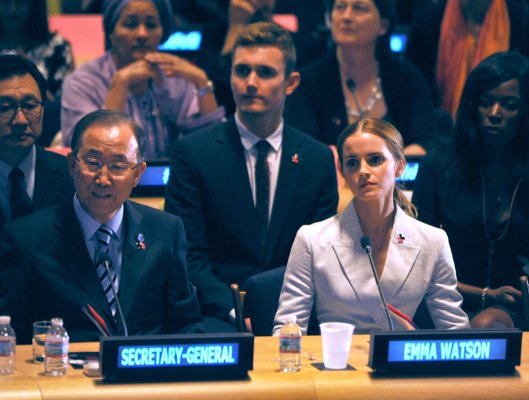 Pitting Emma Watson and Beyoncé Against Each Other Is Anti-Feminist
Next Up: Editor's Pick