Adults may think back on the world a decade ago and sigh in nostalgia at its glorious innocence: no Facebook, no Twitter, no carpal tunnel syndrome from spilling every secret to countless online friends and potential predators. The children of those adults may shrug derisively and ask if their parents also miss the wonderful days before cars, phones and indoor plumbing. The luxuries of one generation are the necessities, the addictions of the next. Progress? An omen of the Apocalypse? You decide.

To judge from his new film Men, Women & Children, Jason Reitman expects the fire this time. And social media, which once meant talking and letter-writing, will provide the fuel for the final conflagration. Based on Chad Kultgen’s rather more explicit novel, this off-kilter ensemble dramedy is a plague movie, like Contagion or World War Z: everyone has the same disease but few realize it’s more than a harmless itch. The dread signs — how e-blather can fester into a metaphorical Ebola — are especially rampant among the students in a Texas high school. Some of their parents are infected, too.

Fifteen-year-old Chris Truby (Travis Tope), a connoisseur of online porn since he was 10, has graduated to images so violent and elaborate that he is incapable of sharing an ordinary sex act with a classmate. Allison Doss (Elena Kampouris), pursuing anorexia almost as a religious vocation, gets sideline cheers — “Pretty bitches never eat” — from other girls online with eating disorders. Tim Mooney (Ansel Elgort) has quit as the star of his school’s football team to spend obsessive hours each day in a Guild Wars gaming site. Hannah Clint (Olivia Crocicchia), aiming to translate her blond allure into stardom on a reality show, has posted naughty photos of herself on a “private” site approved by her mom Joan (Judy Greer). They should know that, in the age of an omniscient NSA and a transparent Cloud, nothing is private. Every intimacy is up for grabs.

In this virtual world, the young are the masters (and slaves); parents must learn from their children, or just log onto their kids’ computers. Chris’s dad Don (a paunchy, subdued Adam Sandler) is less appalled than aroused by what he finds there. He and his wife Helen (Rosemarie DeWitt) have fallen out of love and out of sex; they have to schedule it like a rare play date, and when Helen grudgingly notes, “O.K., but it’s gotta be quick,” Don assures her, “It will be.” Restlessness leads him to a call-girl site and her to a dating service. No points for guessing that the married philanderers end up at the same bar.

Another parent, the ramrod Patricia Beltmeyer (Jennifer Garner), has grown suspicious of her daughter Brandy (Kaitlyn Dever) and turned into the hall monitor of the girl’s texts and cell-hone calls. Need we add that Brandy is the movie’s one healthy teen, building a friendship with the disaffected Tim? If Patricia had been the mother of any of the other kids, her snooping might have saved souls. Here, it could end a life.

In his first three features — Thank You for Smoking, Juno and Up in the Air — Reitman proved himself an ace at serious observational comedy. He was too cool to push viewers toward or away from characters whose internal weirdness he figured would be evident to any attentive mind. Then something snapped. Young Adult went wayward as the sketch of a prom queen 20 years past her prime, and Labor Day illuminated a bondage fantasy with Nativity lighting. Here, Reitman enlisted as co-writer Erin Cressida Wilson, whose previous feature films (Secretary, Fur: An Imaginary Portrait of Diane Arbus and Chloe) dealt with sexual kinks, to lend authority to a synoptic take on a society drenched in virtual venery.

Men, Women & Children attempts to achieve the tone of Reitman’s early films, pirouetting between behavioral levity and dark melodrama, yet it often falls flat. The director’s choice of Emma Thompson as the veddy English narrator of a very American story suggests that he sees Kurtgen’s novel as Jane Austen time-warped into the 21st century: a comedy of manners in an age of new norms. By citing and showing the Voyager’s interstellar mission, Thompson puts the compulsions of a few little Texans into macroscopic long shot — from outer space to cyberspace. But the movie proceeds as if the NASA craft had returned to a slightly different Earth, where people who share nothing but a zip code are bent, or crippled, in various ways by the same malady.

The dozen or so main actors do their best to breathe nuance into characters that are standing in for social statements. Sandler and DeWitt make a perfectly mismatched couple on a journey that long ago took a wrong turn. (They remember 9/11/01 fondly, since it was practically the last time they had ecstatic unplanned sex.) Elgort, the hunky cancer-teen from The Fault in Our Stars, and Dever, of Short Term 12, provide the respite of normal adolescence in this lineup of teen clichés. Garner tries heroically to make sense of a modern book-burner — daughter’s text-deleter — by painting her face with a wounded smile to hint at the sad past that may have steered Patricia toward her current malevolence. But actors shouldn’t have to do all the work, or to work against the script, in trying to bring their characters to plausible life.

Reitman’s long view, which he may mean to be the diagnosis of a sympathetic doctor, plays like a radio preacher’s rant against sins of the flesh. And for all the snazzy effects of kids walking through a mall or a school corridor madly texting — their messages clogging the film frame like dialogue balloons in a Mad magazine splash panel — this film is defiantly old-fashioned, possibly Luddite, in condemning the appetites nourished by modern technology.

The way we remember it, kids of an earlier era hid salacious stuff from their folks, if only under the mattress (the first place a parent would look). They tortured themselves with diet regimens and sought pleasure in video games, board games or Strip Hearts. Spouses found ways to stray. The world was awash in sexuality, always has been, yet somehow most of us survived.

Men, Women & Children doesn’t clarify complex issues so much as it simplifies and very nearly sullies them. You can sit through the movie dutifully noting its lessons, but at the end, you might want to clear your history. 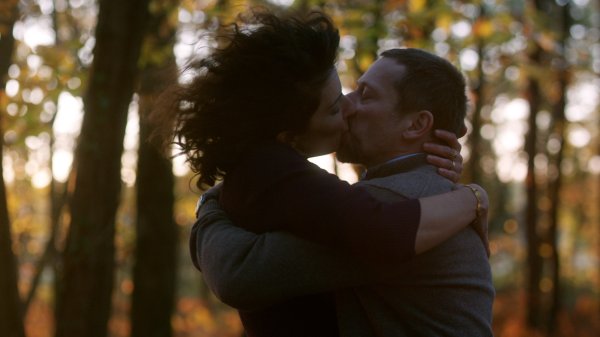 Sex and Death, French-style, in 'The Blue Room'
Next Up: Editor's Pick