It’s hard to imagine anything more insular than a British party political conference—except, perhaps, for an island.

The ruling Conservative Party is currently meeting in the U.K.’s second largest city, Birmingham, but delegates tightly ringed by security and focused on the narrow issue of how to win the next election may as well be on a coral atoll for all the connection they have with the wider world.

Events in Hong Kong go unremarked. U.K. participation in the military campaign against ISIS barely merits a mention. A lone protestor standing beyond the crowd barriers bellowed rage against Britain’s fresh involvement in Iraq for hours Monday, but his words whispered in the convention center like distant waves. Even so, events on this artificial island may yet carry global significance. Britain is getting ever closer to the brink of leaving the European Union.

That is the probable outcome if the Conservatives win the U.K. general election next May, as they have pledged to allow Britain’s increasingly Euroskeptic population a referendum on whether to stay or go. Polls suggest a sizeable majority would vote to leave the E.U. under the current terms of membership.

Admittedly a Conservative victory is far from a sure thing in 2015. The Labour Party enjoys a lead of several points in most opinion polls and the Conservatives, in coalition with the Liberal Democrats since 2010, should expect to be punished by voters for implementing painful austerity policies that have reduced the budget deficit (but not by as much as they promised). But even though Labour may look like the likelier winner, it doesn’t act like it. Neither party members nor the wider public have faith in the current Labour leader Ed Miliband, who capped a lackluster conference last week by forgetting key chunks of the speech that should have energized his troops and instead demoralized them.

In truth all three mainstream parties are suffering from a loss of connection with the public — voters feel they’re untrustworthy, and incapable of championing Britain, whatever form that might take. This disenchantment is fostering the rise across Britain of populist parties that promise a new, more honest mode of politics and more localism. In Scotland this means the Scottish National Party strengthening largely at the expense of Labour, which will struggle to retain its 41 Westminster seats there at the coming election.

But in England, it is the anti-immigration, Euroskeptic United Kingdom Independence Party (UKIP) that has been attracting support on the back of its strident views, which it calls “unashamedly patriotic”. The party’s manifesto not only calls for departure from the European Union, but also restrictions on the numbers of immigrants entering the country, less foreign aid, and priority in the allocation of social housing given to “people whose parents and grandparents were born locally”.

It’s a message that appeals to many who might otherwise be inclined to vote for the Conservative party. The eastwards expansion of the E.U. was enthusiastically supported by past Conservative governments, because they thought a larger union might be less inclined to move towards federalism and consequent impingements on British sovereignty. But enlargement has increased the pool of E.U. citizens entitled to work in the U.K, and fostered resentment among conservative voters, as the British economy struggles to recover from the economic slump. UKIP has capitalized on that resentment; two Conservative MPs have recently defected to UKIP and more are rumored to be considering jumping ship.

“The biggest issue on the doorstep is immigration,” says Phillip Lee, the Conservative MP for Bracknell, west of London, “but this is also related to Europe.” His constituents would like to see an Australian-style points system applied to jobseekers from abroad, he says. That’s a policy UKIP already proposes for all immigrants, whether they come from the E.U. or further afield.

Even so, the Conservatives are better positioned than Labour—which opposes giving Britons a vote on E.U. membership—to fight UKIP on its own turf. Prime Minister David Cameron’s post-Scottish referendum promise of “English Votes for English Laws” plays to demands for more local control, while his party is ramming the message home at every opportunity during its conference that only a Conservative government will deliver an in-out referendum on the E.U. It will doubtless be a pivotal passage in Cameron’s keynote address to delegates tomorrow.

Cameron first made the offer partly in an effort to hold together a fractious party that has a long history of falling out over Europe. But his official position—that he wants Britain to remain in the E.U., but on renegotiated better terms—also happens to be his real preference, not least because many British businesses worry that an E.U. exit will load costs and obstacles on to their European operations. His ideal is to retain the advantages of E.U. membership while shielding Britain against moves to closer E.U. integration precipitated by the euro zone crisis. But in a BBC interview this morning, Cameron made clear that he wouldn’t be too upset if Britain left the E.U. entirely. The sales pitch being rolled out in Birmingham is clear: vote UKIP, get Labour, lose the chance of a referendum.

Despite what the polls say, many Conservatives believe this is a winning formula, and they could well be right. But the same urges the Conservatives would be tapping to win election victory would inevitably still be in play if and when Britons voted on their relationship with Europe. An exit would mean a period of extended turbulence for Britain and for the E.U., used to British intransigence but also used to Britain as a counterbalance to German muscle and French protectionism. The rest of the E.U. hopes Britain stays put, and so does Washington, which still often looks to the U.K. as a bridge to Europe.

British politicians hear these voices but their message, like the shouts of the man outside the Conservative Party conference, are muffled. This island nation with its parochial politics could well be headed for greater insularity. 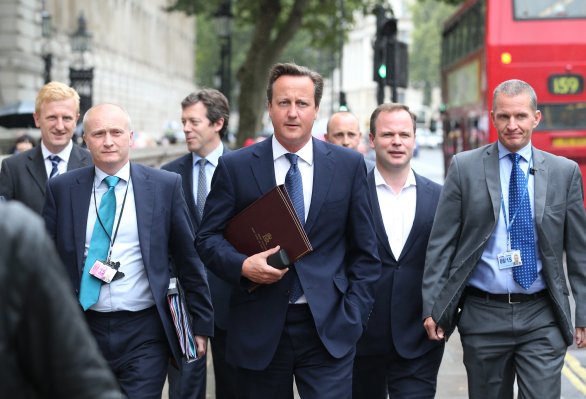