Hong Kong Shows Beijing Exactly What Democracy Can Look Like

Peaceful protesters block a street near the government headquarters in Hong Kong on Sept 30, 2014
Carlos Barria—Reuters
By Emily Rauhala

The Chinese Communist Party insists Hong Kong is not ready for democracy. Beijing announced late last month that if Hong Kong residents want to select their next leader, in 2017, they must choose from a list of candidates essentially vetted by the party. Mainland Chinese officials and academics liken Hong Kong to an insolent child, and the central government to a wise mother. Don’t act out, they warn, or chaos will follow.

Hong Kong people are proving them wrong. On the night of Sept. 29 and the morning of Sept. 30, just 24 hours after demonstrators here were hit with round after round of pepper spray and tear gas, tens of thousands of Hong Kong people took to the streets in a historic act of protest. As local police withdrew, the swelling crowd hung banners and blocked roadways on both Hong Kong Island and the Kowloon side. It could have been a night of violence; peace held.

What happened in Hong Kong that night was nothing short of amazing — the embodiment of civil society. Streams of people occupied the very heart of the city, from the financial district to government offices in Admiralty, to a key intersection across the storied harbor in Kowloon. They moved slowly and carefully through the packed concrete corridors, mindful of the people around them, eager to lend a hand.

In just a week, Hong Kong’s student-led class boycott has morphed into a social movement. The goal is the resignation of the city’s top leader, Chief Executive Leung Chun-ying, and a free election in 2017. Though many Hong Kong people were, or are, wary of pushing too hard, too fast, support is spreading as it becomes clear that the people on the street are committed to protecting the city and each other.

Late on the night of Sept. 29, on a packed subway car heading east from Central District to the shopping mecca of Causeway Bay, sweat-soaked demonstrators make way for ordinary people on their way home. When an elderly woman with a walking cane entered, several stood to offer their seats. She smiled at them, but refused to sit in their place: “You students need the rest,” she said.

The crowd is mostly but not entirely young, and represents many parts city’s social fabric. High school students in crisp white uniforms deliberate homework on the ground. Local business owners donate food. When a group representing the city’s ethnic minorities arrived at government offices, the crowd roared. “We Are Hong Kong, We Stand United,” their sign read.

Volunteers ferry basic necessities to the front and set up support stations. “Do you need a mask?” they ask. “We have biscuits!” People arrive with plastic shopping bags full of granola bars. There are reserves of toilet paper and bandages. Just before 3 a.m. on the morning of Sept. 30, a polite young man offers water. I decline. “We have sparkling too!” he grins.

As the night wears on, atmosphere is tinged by rumors that the police are on their way, that a crackdown is imminent. They are not sure why the police changed tactics and wonder when the authorities will once again resort to batons or tear gas. Some are wary of speaking to the press or being photographed, certain that officials are watching and plotting retribution.

The big unknown, of course, is what local authorities, and their backers in Beijing, will do. In a city that each year marks the anniversary of the 1989 crackdown in Tiananmen Square, people are all too aware of the worst-case scenario: brutal suppression by the central government. Will Beijing show they are listening and give ground? Will they send the People’s Liberation Army to crush the rally?

The ruling party is no doubt weighing its options. On the Chinese mainland, where the Internet is censored and local media are tightly controlled, they could try to stop the news from spreading, to purge scenes of mass protest from the front pages. They could try to cast the crowds in Hong Kong as self-destructive teenagers, to argue that it’s time for bed.

But that won’t fly in Hong Kong, where the press is largely free, and the camera-wielding crowd is documenting their every move. However this ends, it is their posts, pictures and videos that will make history.

It is a history the city can be proud of. Where there might have been discord and violence, cooperation and camaraderie reigned. A lesson for Beijing. 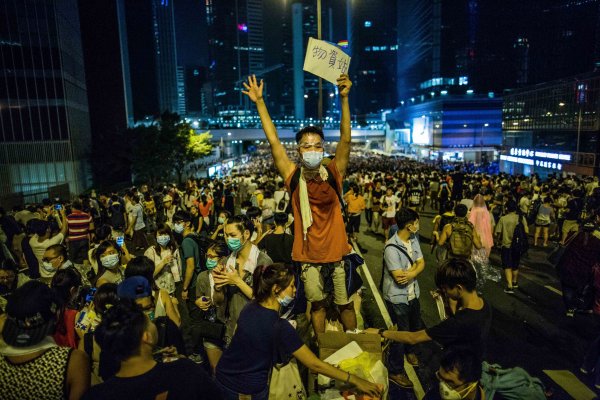