Occupy Central leaders on Tuesday announced an Oct. 1 deadline for the Hong Kong government to respond to their demands for voting reform, as mass pro-democracy protests entered their third day.

Oct. 1 is China’s National Day, and stipulating it as an ultimatum will be seen as a grave affront by Hong Kong’s sovereign rulers in Beijing.

A statement from Occupy Central called on Chief Executive Leung Chun-ying to grant Hong Kong people the right to nominate and directly vote for candidates for the city’s highest office. The group also called for his resignation by Wednesday, the Associated Press reports.

However, Leung said Tuesday that there was no way Beijing would acquiesce. “The central government will not rescind its decision,” he said, adding that neither would he resign is position.

Chan Kin-man, a co-founder of Occupy Central, told TIME late on Monday that the large-scale occupation of Hong Kong’s streets may not go on for much longer, and mentioned Oct. 1 as the day the barricades could come down and the protests would switch gear. However, his stance is at odds with the determination of tens of thousands of mostly young protesters to stay on the streets. 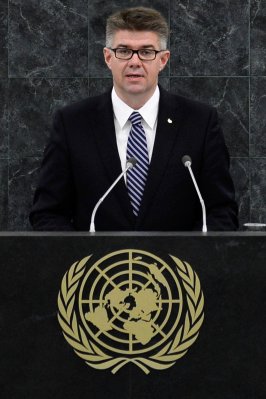 Iceland Plans for Men-Only Conference on Gender Equality
Next Up: Editor's Pick