The Pros and Cons of 'President Grandma'

Hillary Clinton has had many titles: mother, First Lady of the United States, U.S. Senator, Secretary of State and, most recently, grandmother. In her last presidential campaign, it was her experience as a senator and, to a lesser extent, first lady, that were the selling points of her campaign. But if she runs again in 2016, she won’t just be touting her experience as top diplomat, she’ll also sports a different kind of distinction: the first viable presidential contender who also happens to be a grandmother.

There are pros and cons in politics to the title of grandma, some of them uniquely Clintonian. At a time when Clinton’s recent remarks about not driving a car since 1996 and struggling to make ends meet after Bill Clinton’s presidency made her seem out of touch with the populist times, being a grandmother makes her relatable.

“As we saw in 2008, she had a more difficult time relating to voters on a personal level,” said Jennifer Lawless, director of the Women & Politics Institute at American University. “Being about to tell stories about having a first grandchild might serve as one way to connect with the millions of Americans who watched Chelsea grow up and who are now grandparents’ themselves. Any benefit will surely be tiny, but it could drive up empathy a bit.”

If Clinton chooses to promote her grandmotherly status, it would be the opposite tack that she took in 2008 where she was so concerned about showing voters she wasn’t a weak woman that she buried the historic nature of her campaign. In that regard, Clinton is the opposite of most women running for office, who try to avoid mentioning their families because they don’t want to seem soft. Being perceived as tough “is particularly important for executive offices, where strength and toughness, and singular leadership, are valued most,” said Kelly Dittmar, a scholar at Rutgers University’s Center for American Women in Politics. “Of course, some of this will be very unique to Hillary Clinton, as she struggled in her last presidential campaign to empathize with voters and was often criticized for being too hard.”

Being a grandpa almost never hurt a male presidential candidate. Few remarked on Mitt Romney’s grandchildren except, perhaps, at the large number of them. Let’s face it: There will be a double standard for Clinton compared to any other male politician running for President. The image of a blue-haired granny is a tried-and-true American stereotype, and one that is antithetical to the image of the commander-in-chief with his finger on the button.

But again, Clinton’s previous campaign and life experience defies that contrast. “While it might be different for other candidates, particularly female candidates who are less known and still need to prove their competence, I think for Hillary Clinton it is a positive,” said Michele Swers, an associate professor in American Government at Georgetown University and author of “The Difference women Make.”

But the biggest risk of being the grandma-candidate is that it does remind voters of Clinton’s age. On Election Day 2016, she’ll be 69, just months younger than the oldest U.S. President, Ronald Reagan, when he was elected in 1980. And it was Clinton’s husband Bill, who successfully painted the last President to be a grandparent in office, George H. W. Bush, as old and out of touch when he beat him in the 1992 election. 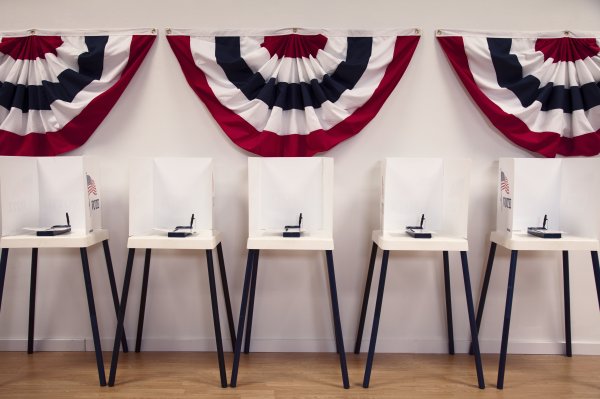 Voting Rights Battles Heat Up Ahead of Midterm Elections
Next Up: Editor's Pick