Israeli Prime Minister Benjamin Netanyahu pushed back Monday against Palestinian leader Mahmoud Abbas’ claims that Israel was waging a “genocide” against Palestinians, and called on world leaders to treat Palestinian militant group Hamas as indistinct from the Islamic State of Iraq and Greater Syria (ISIS).

Speaking at the United Nations General Assembly, Netanyahu refuted claims by Abbas and others that his military had committed war crimes during the 50-day war in the Gaza Strip this summer, citing the lengths to which the Israeli Defense Force went to warn civilians to evacuate targeted areas.

“Israel dropped fliers, made phone calls, sent text messages, broadcast warnings in Arabic, all to allow civilians to evacuate targeted areas,” Netanyahu said, arguing that Israel took all available precautions to protect civilian lives, while Hamas deliberately fired rockets from areas where children live and play. “Israel was using its missiles to protect its children, Hamas was using children to protect its missiles,” he added.

He said that the fact that Hamas’s deliberate placement of rockets in civilian communities were the “real war crimes.”

The Israeli Prime Minister also spoke about the growing “cancer” of militant Islam, comparing the situation in Israel with that in Iraq and Syria. “ISIS and Hamas are branches of the same poisonous tree,” he said. “When it comes to their ultimate goals, Hamas is ISIS and ISIS is Hamas. And what they share in common, all militant Islamists share in common.”

The conflict, which ended in August, left 2,100 Palestinians dead and 73 Israelis dead, according to the BBC. The UN said that most of the Palestinian dead were civilians. “This last war against Gaza was a series of absolute war crimes carried out before the eyes and ears of the entire world, moment by moment,” Abbas said last week.

Netanyahu said criticism in Europe of Israel’s treatment of Palestinian civilians often amounts to thinly-veiled anti-Semitism. “We hear mobs today in Europe call for the gassing of Jews, we hear some national leaders compare Israel to the Nazis,” he said. “This is not a function of Israel’s policy, this is a function of diseased minds. That disease has a name, it’s called anti-Semitism, and it’s spreading in polite society.”

The president also warned that Iran was undergoing a “manipulative charm offensive” in order to lift sanctions and continue with plans to build a nuclear weapon. “It’s one thing to confront militant Islamists on pickup trucks… its another thing to confront militant Islamists armed with weapons of mass destruction,” he said. “Would you let ISIS enrich uranium? Then you shouldn’t let the Islamic state of Iran do them either.”

A UN Council tasked with negotiating with Iran on its nuclear program has not made much progress in recent weeks, according to the LA Times. They hope to reach an agreement to limit Iran’s nuclear program to non-military uses in exchange for lifting oil sanctions.

Netanyahu urged the world’s leaders not to trust what he called the “world’s most dangerous regime.” “To say Iran doesn’t practice terrorism is like saying Derek Jeter never played shortstop for the New York Yankees,” he said. 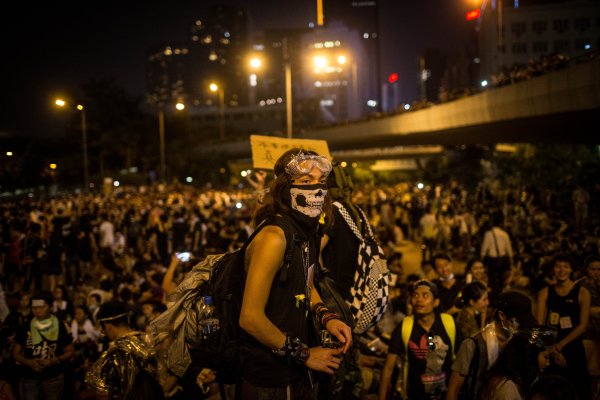