What to Expect When Your Name is Charlotte

Congratulations, you’re the most powerful infant in the world! Even better news: the second most powerful baby in the world, the newest member of the Clinton family, is also named Charlotte. (Your brother is a toddler, he doesn’t count.)

On behalf of the small but growing cohort of non-royal Charlottes, thank you for teaching the world how to spell our name. We may soon be free of the scourge of “good guesses” like Charlot, Sharlet, and Sherlit. It’s one small step for a baby, one giant leap for Charlotte-kind, and one big lesson for Starbucks baristas.

But that’s why ‘Charlotte’ is a special name; it’s simultaneously famous and rare. Until the birth of your slightly older future BFF Charlotte Clinton Mezvinsky, there were relatively few examples of notable Charlottes. But the few were mighty. Charlotte Brontë wrote Jane Eyre, a book you will love in high school. Charlotte Perkins Gilman was a famous American feminist and sociologist who wrote the short story The Yellow Wallpaper, which will make you question your own sanity. Charlotte Hawkins-Brown was an educator and activist who started a school for black students in the South. Charlotte of Mecklenburg-Strelitz was married to King George III, who was King of England during the American Revolution. That’s something for you and American Charlotte to hash out later.

In fiction, the name has fared slightly better. The best Charlotte is definitely the spider in Charlotte’s Web, a book that is undoubtedly being shipped to your parents at this very instant, from all different parts of the globe. Because of this Charlotte, you may not have the aversion to spiders so common in other little girls. In darker fiction, Charlotte is the love interest in Goethe’s The Sorrows of Young Werther, and Lolita’s mother in Nabokov’s Lolita, which your parents will explain to you later. The most popular Charlotte in recent memory is probably Kristin Davis’s character from Sex and the City, which might have contributed to the resurgence of the name’s popularity.

Until the last few years, Charlotte has not been a hot choice for baby girl names, never having the wildfire spread of Jennifer or Emily. In 2000, Charlotte was the 289th most popular baby name in the US, but in 2013, it was #11. Back in my day, you could not find tiny motorcycle license plates with “Charlotte” on them. Not even in Times Square.

Because of its relative rareness, many Charlottes are not accustomed to sharing their name. Unlike Emilys and Emmas, Sarahs and Sofias, most Charlottes have not yet come to the point where they need to call themselves by their full name or last initial in order to distinguish themselves from their classmates. But as a growing cohort of now-baby Charlottes prepare themselves for kindergarten, that time is coming to a close. As a result, Charlottes may soon be grasping for nicknames, and they may find slim pickings.

Unlike Elizabeth, Margaret and Alexandra, the nicknames for Charlotte are few and peculiar. Charlotte is long on the page but short on the tongue, which gives the impression that the name should be shortened. Charlie, Lotte, and Lottie are nice options, but they don’t suit everyone. Your name will inevitably be shortened to Char, which evokes images of fish entrees or blackened meat. Ultimately, I cannot guide you here. Each Charlotte must find her own path.

A final word of advice, young Charlotte: the best true rhymes for Charlotte are ‘scarlet’ and ‘harlot.’ With that in mind, try to avoid games or songs where a rhyme must be found for your name. You’ll thank me later. 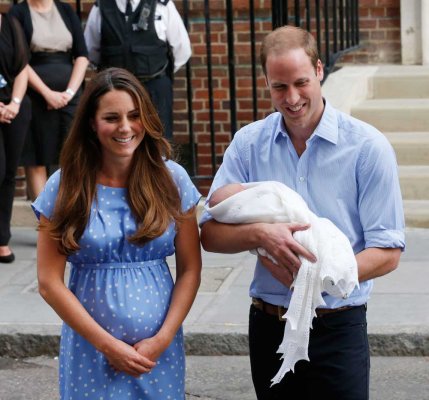 Princess Kate In Labor With Royal Baby Number 2
Next Up: Editor's Pick