Protesters gather in the streets outside the Hong Kong government complex in Hong Kong on Sept. 29, 2014
Chris McGrath—Getty Images
By TIME Staff

A co-founder of the Hong Kong pro-democracy organization Occupy Central said late Monday that the group will change tactics because the unprecedented protests it has helped to organize are unsustainable and could backfire.

Sociologist Chan Kin-man, a former professor at Chinese University of Hong Kong, told TIME it’s “unrealistic” to expect protesters to continue to occupy key downtown locations for much longer, bringing roads to a standstill and disrupting businesses. He hinted that the barricades should come down and blockades end on Oct. 1 — China’s National Day.

His thinking seemed sharply at odds with the mood on the streets Monday, and would shock many of the tens of thousands of mostly young demonstrators who unloaded truckloads of supplies as the night wore on and looked set for a protracted siege in their push for free elections.

Protesters’ ranks appeared to have grown considerably since the weekend, and an almost jubilant air could be felt as demonstrators in Queensway, close to the city’s legislature, passed around chocolate cake, cookies and freshly grilled hotdogs while a student group performed a dance routine. Some played soccer. At one point, thousands held up backlit cell-phone screens, forming a stunning ravine of light that stretched into the distance.

Across the harbor in Kowloon, a black-clad DJ flipped open his laptop, set up his mixing console and entertained hundreds of demonstrators at the Nathan Road protest site with an impromptu set. Families with children could be seen among the demonstrators, who chanted and listened to speeches as they sat or reclined along a broad stretch of road that is normally one of the city’s busiest.

The protest was remarkably peaceful and orderly. Protesters erected signs apologizing to office workers for the inconvenience. At one point, a group of activists began directing traffic along busy Hennessy Road.

Chan said the Occupy Central group wants “the people to stay out until at least Oct. 1.” After that, he says, “we will announce a new stage of the campaign.”

The activist is worried that a prolonged occupation will eventually invite a bloody crackdown from the authorities. He also believes the goal of many on the streets — major electoral concessions from Beijing — is unrealistic, and should be replaced with the more achievable aim of ousting the city’s unpopular leader, Leung Chun-ying.

“Once he steps down, we can start over,” Chan told TIME.

“Many adults feel like they cannot do anything to change the situation, but young people have a dream,” said 21-year-old student Nicholas Ng.

Eric Ng (no relation), a 21-year-old event planner who has been on the streets for three days, leaving only to take quick shower breaks, said, “I’ve never seen this many people asking for what we need. We’ll still stay here. If we leave on Oct. 1, it won’t have been here long enough.”

Chan’s moderate stance highlights what many say is a growing generational gap between a protest leadership of middle-aged academics and professionals, and rank-and-file demonstrators, who are mostly students and impatient for the electoral freedoms they have come to regard as their birthright.

Tensions between the two camps emerged over the weekend, when some students participating in a classroom boycott accused Occupy Hong Kong of hijacking their campaign in order to launch the broader protests, bringing forward the widely expected start date by several days.

The police use of tear gas on Sunday evening has also galvanized sections of the public that had previously remained on the sidelines.

“To be honest, I didn’t really support this,” said Raymond Chan, a 38-year-old high school math teacher. “But when the police used tear gas on people last night, that changed my mind. They used tear gas, without any warning. The fact that they did that just makes us stronger and more unified.”

“The police were very harsh firing the tear gas yesterday, and that’s why I’m here,” said Lillian Chung, a young arts student. “If we don’t come here, Hong Kong is going to have a sorry, sorry future.”

Occupy Hong Kong is hoping that people like Chung will leave the streets and find other ways of continuing the protest in two days’ time. Before the week is out, they will know whether or not they are still in control of a sweeping social movement they helped launch. 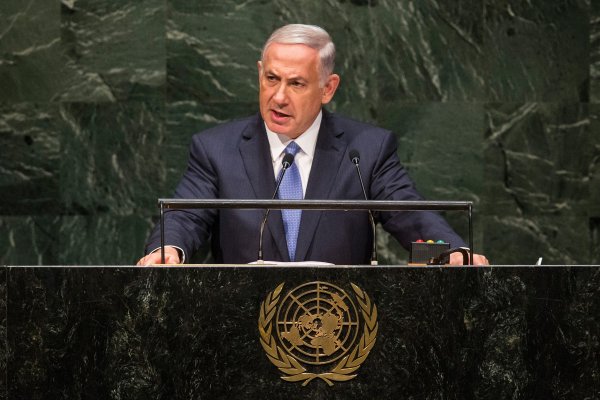 Live: Israel's Prime Minister Speaks at the U.N.
Next Up: Editor's Pick