Lena Dunham's Story of Rape Is a Must-Read

Lena Dunham, author of 'Not That Kind of Girl'
Autumn de Wilde
By Eliana Dockterman

The most remarkable part of Lena Dunham’s new memoir Not That Kind of Girl: A Young Woman Tells You What She’s “Learned” begins with a seemingly unremarkable story. Dunham writes a darkly humorous essay about a time she realized in the middle of sex that a condom she thought her partner had put on was hanging from a nearby plant.

It’s an experience similar to a scene you might see on her HBO show Girls: a little disturbing and a little funny with a lot of nudity.

But then Dunham does something interesting: after finishing out the chapter, entitled “Girls & Jerks,” she forces the reader to double back. “I am an unreliable narrator,” she writes. And with those words, we dive back into the story of Barry, the guy who flung the condom into the tree. “[I]n another essay in this book I describe a sexual encounter with a mustachioed campus Republican as the upsetting but educational choice of a girl who was new to sex when, in fact, it didn’t feel like a choice at all.”

Lena Dunham says she was raped, though she didn’t immediately know that it was rape.

Like many college girls, a mix of alcohol, drugs, unspoken expectations and shame may have kept her from using the “r” word to refer to the act until years later. She says that she rewrote history in her head, coming up with many versions (including the one above). The real tale — or what she remembers of it — is much more painful. It begins at a party where Dunham is alone, drunk and high on Xanax and cocaine. It’s in that state that she runs into Barry, who she describes as “creepy,” and who sets off an alarm of “uh-oh” in her head as soon as she sees him.

After the two return to her apartment, Dunham does everything she can to convince herself that what’s happening is a choice. “I don’t know how we got here, but I refuse to believe it’s an accident,” she writes. She goes on to describe the event in graphic detail. Once he has forced himself on her, she talks dirty to him, again, to convince herself that she’s making a choice. But she knows she hasn’t given her consent. When she sees the condom in the tree — she definitely did not consent to not using a condom — she struggles away and throws him out.

Dunham — drunk and high — was in no condition to consent according to the new rules being implemented at many campuses across the country. And in Dunham’s second story, the thrown away condom and Barry’s aggressiveness make it clear that he did not care about what Dunham wanted.

It’s her roommate that first tells her the encounter was a rape, though Dunham doesn’t believe her: “Audrey’s pale little face goes blank. She clutches my hand and, in a voice reserved for moms in Lifetime movies, whispers, ‘You were raped.’ I burst out laughing.”

Though for decades we’ve thought of the rapist as a man who lurks in alleyways, the data shows he’s more likely an acquaintance, friend or even a boyfriend. Approximately two-thirds of rape victims know their attacker, according to the U.S. Department of Justice. That makes it all too easy for skeptics to accuse women of making false claims of rape: “Despite hysterical propaganda about our ‘rape culture,’ the majority of campus incidents being carelessly described as sexual assault are not felonious rape (involving force or drugs) but oafish hookup melodramas, arising from mixed signals and imprudence on both sides,” writes Camille Paglia for Time.

Such statements suggest that anyone can be a rapist if they’ve had enough to drink. But one study found that nine out of 10 men who described committing acts of sexual assault on college campuses to researchers said they had done so more than once: on average, a perpetrator will assault six people. “Part of the problem is a pure lack of understanding of the true nature of campus sexual assault. These are not dates gone bad, or a good guy who had too much to drink. This is a crime largely perpetrated by repeat offenders,” Senator Kirsten Gillibrand wrote for Time.

And given how difficult it is to report a rape — it can involve an invasive rape kit exam, an investigation and trial that can last for years and accusations that you are a liar — there seems to be little motivation to fake such an event. Filing a complaint with the university or police forces victims to deal with the fact that someone had control over them, over their bodies. Denial is simpler, at least in the beginning.

Perhaps that explains Dunham’s laugh. It certainly explains why, according to the Rape and Incest National Network (RAINN), 60% of rapes go unreported.

It’s not until she pitches the first, tamer version of the story in the writer’s room of Girls that Dunham comes to the realization that she was raped. Here’s how she describes the reaction to her suggested plot line:

Dunham has since become a fierce advocate of campus reform when it comes to matters of sexual assault. Dunham’s sister wrote “IX” on the top of her graduation cap during the #YesAllWomen Twitter campaign this year in honor of Title IX, the federal statute that mandates schools protect victims of sexual assault (among other things).

But sharing her own story is perhaps her bravest work of activism yet. We are still in a culture where women are told that they are to blame for anything that might happen if they drink and bring a man home. “I feel like there are fifty ways it’s my fault…But I also know that at no moment did I consent to being handled that way,” Dunham writes in the book. Dunham has come under fire for being too self-indulgent, revealing too much. But in this case, her candor may become a lifeline for women who’ve been through something similar and are feeling confused and alone.

Read Roxane Gay’s review of Not That Kind of Girl, which hits bookstores on September 30th, here. 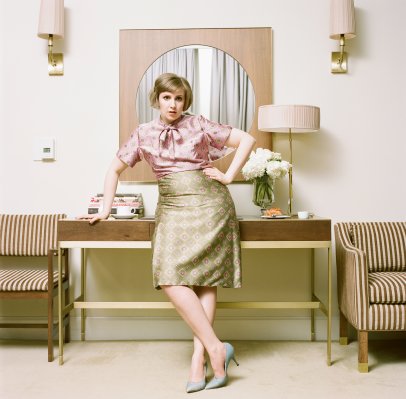