Democratic legislators have called for the impeachment of Hong Kong’s top leader, after police used tear gas on pro-democracy demonstrators late on Sunday and protest numbers swelled into the tens of thousands during the turbulent night.

A group of 10 pro-democracy lawmakers met with the president of the Legislative Council on Monday afternoon over plans to bring impeachment proceedings against Leung Chun-ying, the city’s Chief Executive.

Democratic Party chairwoman Emily Lau told TIME that the group must wait at least 12 days before bringing charges against Leung, according to official rules.

“The ball is now in the government’s hand,” she said. “The people have spoken, and we will work with them to try to secure democracy.”

Lau also praised pro-democracy demonstrators for their restraint in protests that — though massive — have retained a characteristically Hong Kong sense of order, even after Hong Kong police used 87 canisters of tear gas on protesters on Sunday, according to the South China Morning Post.

“Not a single window has been broken. I challenge you to go around the world and to find such huge demonstrations where there is no looting, there is no rioting,” said Lau.

“This I something we should be very proud of here in Hong Kong,” she said.

Demonstrators have taken to the streets here over Beijing’s Aug. 31 decision to restrict candidates for Hong Kong’s highest office to a candidates curated by a nominating committee widely perceived as loyal to China.

Pro-democracy supporters see Beijing’s decision as a violation of a clause in Hong Kong’s miniconstitution that promises its people eventual universal suffrage. Demonstrators here have pledged to clog the streets of this financial hub’s downtown until the central government agrees to table the proposal, saying they’ll go home only when Leung confronts Beijing with a plan for swifter electoral reform.

In a televised statement on Monday, Leung urged protesters to vacate the streets “so that the daily lives of the public would not be affected,” the Post said. The government also said in statement that it had pulled riot police from the roads and called on protestors to also leave the streets.

But by Monday afternoon, thousands of pro-democracy protestors seemed unwilling to abandon their positions and continued to throng in major thoroughfares in Hong Kong’s commercial hotspots, bringing the demonstrations into their second week.

“All you have to do is come sit here, and if you are hungry, we will feed you, and if you are thirsty, we will give you water,” said Sunny Yuen, 27, a bartender who had skipped work to join protestors in the fashionable Causeway Bay neighborhood on Monday morning.

As Yuen huddled under a yellow umbrella, scrawling calls for democracy onto strips of cardboard, protestors around him passed each other bananas, McDonald’s takeout and umbrellas, preparing for a long night beneath the gaze of models brooding on billboards above them.

Pan-democrats here have been at loggerheads with Beijing-backed Leung for years, having unsuccessfully lobbied for his resignation in 2012, over what they said were zoning violations inside his homes. 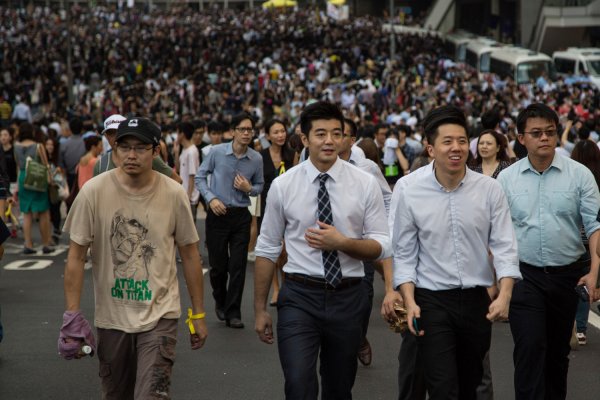 Hong Kong Unions Call for Strikes
Next Up: Editor's Pick