Notes from supporters of the thousands of protesters who paralyzed parts of Hong Kong to demand greater democracy from Beijing are seen in Sydney on Sept. 29, 2014
Peter Parks—AFP/Getty Images
By Rishi Iyengar

As tens of thousands of protestors flooded the streets of Hong Kong over the weekend, their struggle for democracy captured the imaginations of supporters across the world.

The Wall Street Journal reported that a group called the Hong Kong Overseas Alliance organized protests Saturday in various cities to show their solidarity with the Occupy Central movement — now being dubbed the Umbrella Revolution because of the ubiquitous umbrellas being used by protesters to shield themselves from police pepper spray.

Demonstrations were held by the group in New York City, which saw 200 people march on the Chinese consulate. Smaller protests were held in Vancouver and Los Angeles.

Another group, calling itself United for Democracy: Global Solidarity With Hong Kong, conducted a rally in London on Saturday that drew over 400 people. The protesters, mainly Hong Kong citizens and students, marched to the Hong Kong Economic and Trade Office in the city’s plush Mayfair district, and tied yellow ribbons on the building’s railings.

The yellow ribbon has been adopted as the symbol of Hong Kong’s struggle for democracy, and has inspired a movement in Australia called the Yellow Ribbon Campaign. The campaign reportedly collected 500 signatures from 12 Australian universities for a petition of support.

“My heart sinks, as my brother and sister are participating in Occupy movement. I am worried for their safety,” organizer Chrisann Palm, a Brisbane-based Hong Kong citizen who teaches at Queensland University of Technology, told the Journal.

According to Global Solidarity’s social-media accounts, there were rallies in Perth, Canberra, Sydney and Melbourne on Monday, as well as in Kuala Lumpur and Paris. Demonstrations are planned for Dublin, Seattle, Auckland, Copenhagen and Stockholm on Oct. 1.

A petition urging support for Hong Kong’s push for democracy has also made its way onto the White House public petitions site. “We hereby strongly appeal to the U.S. government to make it clear to the Beijing authorities that any effort to crackdown peaceful demonstrations by force will be strongly opposed and severely punished,” said the petition, which has already reached more than 183,000 signatures in response to its goal of 100,000 by Oct. 4.

Meanwhile Mashable reported that a group in Ferguson — the Missouri town where the shooting of black teenager Michael Brown sparked protests and police crackdowns — held up signs in Chinese to express their solidarity with Hong Kong demonstrators.

Closer to home, solidarity protests have been convened in Taiwan’s capital Taipei, with the Straits Times reporting that a group of protesters led by student activist Chen Wei-ting demanded that their President condemn the situation in Hong Kong and cease all dealings with the Chinese government. Pro-democracy protesters also reportedly crowded a Hong Kong trade office in Taiwan, and briefly scuffled with police. 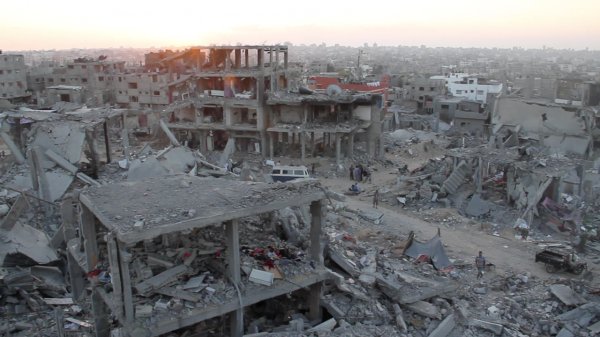 The Hardest First Day: Gaza Kids Return to School
Next Up: Editor's Pick