Hong Kong's Protesters Are Fighting for Their Economic Future

Thousands of protesters attend a rally outside the government headquarters in Hong Kong as riot police stand guard on Sept. 27, 2014
Tyrone Siu— Reuters
By Michael Schuman

The conventional wisdom about Hong Kong’s pro-democracy protests is that they are bad for business. Hong Kong has become one of the world’s three premier financial centers (along with New York City and London) because the city has been a bastion of stability in an ever changing region, the thinking goes, and therefore the tens of thousands of protesters who paralyzed downtown Hong Kong on Monday are a threat to its economic success. The Global Times, a state-run Chinese newspaper, used just such an argument to try to persuade the protesters to clear the streets. “These activists are jeopardizing the global image of Hong Kong, and presenting the world with the turbulent face of the city,” it said in an editorial on Monday.

That worry isn’t merely Beijing propaganda. Andrew Colquhoun, head of Asia-Pacific sovereign ratings at Fitch, said one of the big questions facing Hong Kong over the long term is “whether the political standoff eventually impacts domestic and foreign perceptions of Hong Kong’s stability and attractiveness as an investment destination.” The fallout for Hong Kong’s financial sector from the Occupy Central movement was immediate. The stock market dropped, banks closed branches, and the Hong Kong Monetary Authority, the de facto central bank, had to reassure the investor community that it would “inject liquidity into the banking system as and when necessary” to overcome any possible disruptions.

But the real reason why Hong Kong has been so successful is that it is not China. When Hong Kong was handed back to Beijing by Great Britain in 1997, the terms of the deal ensured that the former colony, ­now called a “special administrative region,” or SAR, of China ­would maintain the civil liberties it had under British rule. That separated Hong Kong from the Chinese mainland in key ways. In China, people cannot speak or assemble freely, and the press and courts are under the thumb of the state. But Hong Kongers continued to enjoy a free press and freedom of speech and well-defined rule of law. The formula is called “one country, two systems.”

That held true in the world of economics and finance as well. On the Chinese side of the border, capital flows are restricted, the banking sector is controlled by the state, and regulatory systems are weak and arbitrary. Meanwhile, in Hong Kong, financial regulation is top-notch, capital flows are among the freest in the world, and rule of law is enshrined in a stubbornly independent judicial system. Those attributes have given Hong Kong an insurmountable advantage as an international business hub. Banks from all over the world flocked to Hong Kong, while its nimble sourcing firms orchestrated a global network of supply and production that became known as “borderless manufacturing.” While there has been much talk of Shanghai overtaking Hong Kong as Asia’s premier financial center, the Chinese metropolis simply cannot compete with Hong Kong’s stellar institutions, regulatory regime and laissez-faire economic outlook.

What happens if Hong Kong loses this edge? In other words, what happens if Beijing changes Hong Kong in ways that make its governance and business environment more like China’s? Hong Kong would be finished. The fact is that Hong Kong’s economic success, the nature of its institutions and the civil liberties enjoyed by Hong Kongers are all inexorably entwined. If Beijing knocks one of those pillars away, ­if it suppresses people’s freedoms or tampers with its judiciary, ­Hong Kong would become just another Chinese city, unable to fend off the challenge from Shanghai. Foreign financial institutions would be forced to decamp for a more trustworthy investment climate.

That’s why the Occupy Central movement is so critical for Hong Kong’s future. So far, Beijing has generally abided by its agreement with London and left Hong Kong’s economic system more or less unchanged. But when China’s leaders made clear last month that Hong Kongers would be able to choose their top official, known as the Chief Executive, from 2017 onward only from candidates who have the approval of Beijing, it became obvious that Hong Kong was going to face tighter control by China’s communists over time. That raises the specter that Beijing will at some point dismantle “one country, two systems” and along with it the foundation of the Hong Kong economy.

By fighting for their democratic rights, the activists in Hong Kong are fighting for an independence of administration and governance that will perpetuate their city’s economic advantages. Beijing should realize that ultimately a vibrant Hong Kong is in its own interests. China has benefited tremendously from Hong Kong over the past 30 years. It was Hong Kong manufacturers that were among the first to bravely open factories in a newly opened China, thus sparking the mainland’s amazing economic miracle. Chinese firms have been able to capitalize on Hong Kong’s stellar international reputation to raise funds and list shares on the city’s well-respected stock exchange. Even now, China continues to upgrade its economy by seeking Hong Kong’s expertise. The stock markets in Hong Kong and Shanghai are in the process of being linked to allow easier cross-border investment.

Of course, Hong Kong’s economy is far from perfect, and here, too, the importance of Hong Kong’s democracy movement can be found. The SAR suffers from a highly distorted property market and one of the widest income gaps in the world. Such ills have bred more resentment in the city toward Beijing. Yet right now many of the people of Hong Kong simply don’t trust their Beijing-chosen leaders to resolve these issues. Hong Kong requires a popular administration that commands the support of the people in order to implement the reforms necessary to tackle these critical problems. Thus the battle unfolding on the streets of central Hong Kong is a contest for the city’s very survival. Perhaps Hong Kong’s pro-democracy activists will disrupt the usually sedate financial district for a few days. But that’s a tiny sacrifice compared to the long-term damage Hong Kong faces if its citizens do nothing. 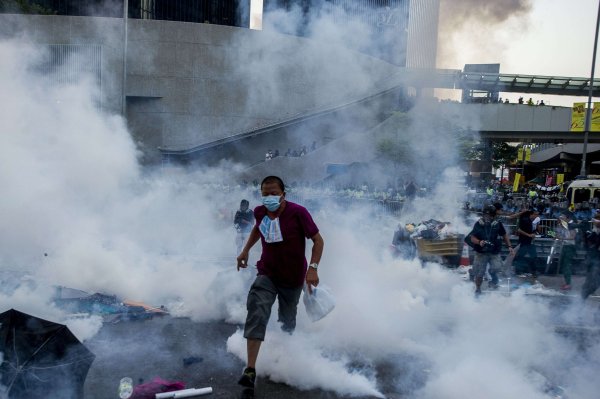 Hong Kong Digs In
Next Up: Editor's Pick