China is gearing up for the National Day holiday on Oct. 1, celebrating 65 years since Chairman Mao Zedong founded the communist People’s Republic of China. What better way to mark the national anniversary than visiting Hong Kong?

Never mind, of course, that the financial capital is choking from tear gas and pepper spray, after riot police battled tens of thousands of demonstrators protesting Beijing’s refusal to bestow hoped-for democratic reforms upon Hong Kong. Or that the fireworks have now been canceled.

When the onetime British possession was reunified with China in 1997, Hong Kong was promised that it would be governed under the “one country, two systems” principle that guaranteed it significant autonomy for 50 years. But late last month a coterie of central government leaders quashed hopes that locals could freely elect Hong Kong’s top leader, known as the chief executive, in 2017.

A mosaic of Hong Kong residents has responded by taking to the streets in a movement called Occupy Central With Love & Peace. Even the advent of the workweek in this famously business-oriented territory has failed to dislodge some protesters, who on Monday morning maintained their positions in several locations across the city.

But for all the momentum gathering in Hong Kong these days, the heady winds of democracy and civil disobedience have so far failed to sweep northward. Unlike the Tiananmen pro-democracy rallies a quarter century ago, to which some Hong Kong activists are ambitiously comparing their movement, modern telecommunications allow images and analysis of Occupy Central to spread nearly instantaneously across the globe.

Except in China, where most Chinese live in an alternate online universe. Facebook and Twitter are banned here, and local search engines — run by those same tech companies being lauded by Wall Street for their frothy IPOs — censor out sensitive material on, say, the Tiananmen massacre 25 years ago or the more recent “color revolutions” that overthrew a slew of repressive leaders. Over the weekend, Chinese social-media references to the Hong Kong protests were scrubbed by Chinese censors.

On Monday, Internet speeds in Beijing and Shanghai slowed noticeably, a constriction that tends to coincide with news events deemed sensitive by the Chinese state. Instagram, which is usually accessible in China, wouldn’t load. One Chinese Internet portal ran a news clip noting that thousands of pro-Beijing protesters had gathered in Hong Kong, while neglecting coverage of the much larger crowds elsewhere in the territory.

For many Chinese, there is no news coming out of Hong Kong. Or if there is, it is merely the frantic cry of a few rabble-rousers. At noon on Sept. 29, Xinhua’s home page totally ignored the chaos in Hong Kong; the only mention of the territory was a brief headline: “Hong Kong Shares Down 1.94 Pct by Midday.” What possibly could have triggered the stock market dip? Punters were not informed, at least on the home page of China’s official news agency.

Meanwhile, Beijing has made it clear dissent will not be tolerated. Last week, China’s President Xi Jinping, who during his first two years in office has consolidated power more rapidly than his predecessor did, noted that the People’s Liberation Army “must have absolute loyalty and firm faith in the Communist Party of China,” according to Xinhua.

On Monday, the Global Times, which has fashioned itself into the Fox News of China with its knee-jerk patriotism and inflammatory rhetoric, published an editorial headlined “Street Movement Ruins Hong Kong Image,” and admonishing “radical activists” for their “illicit campaign.”

“As Chinese mainlanders, we feel sorrow over the chaos in Hong Kong,” said the editorial before warning, “The radical activists are doomed.”

Such threats are surely spooking the students, activists and, above all, ordinary residents congregating in Hong Kong, even as the local government announced on Monday that riot police were being withdrawn. Some Hong Kongers came prepared with homemade anti-tear gas and pepper-spray defenses, such as ski masks, swimming goggles and plastic wrap. Others used umbrellas to ward off the noxious jets. (On Monday, parasols were also being used to ward off the sun.) Indeed, so many umbrellas have been unfolded that wags have dubbed Hong Kong’s stand the “umbrella revolution.”)

But as the streets of Hong Kong erupted in clouds of tear gas on Sunday night, the skies were largely clear in much of the rest of China. On the evening of Sept. 28, Shanghai marked the coming birthday of the People’s Republic with a dazzle of fireworks. The booms ricocheting across the city’s riverfront signaled celebration, not democracy denied. It was a glorious night. 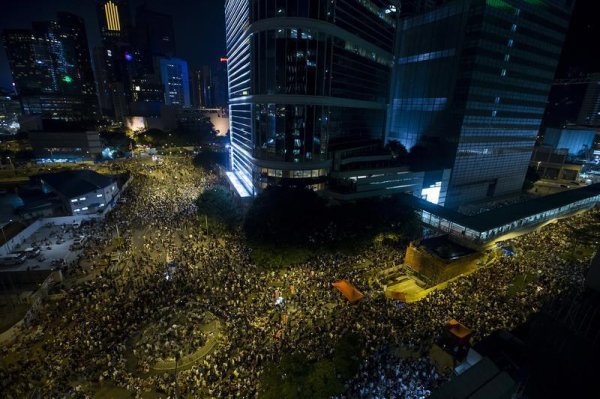 Hong Kong Economy Key in Protests
Next Up: Editor's Pick