Armed men, believed to be Russian servicemen, stand guard, with Ukrainian servicemen seen in the foreground, at a military airbase, in the Crimean town of Belbek near Sevastopol March 22, 2014.
Shamil Zhumatov—Reuters
By Noah Rayman

Russian forces stormed one of the last Ukraine-held military bases in Crimea Saturday, as Russia strengthened its grip on the peninsula a day after formally annexing it.

Troops believed to be under Russian command fired automatic weapons and stun grenades when they entered the Belbek Air Base, one of the last military bases still held by Ukraine, Reuters reports. The Ukrainian base commander, Colonel Yuliy Mamchur, told Reuters that one serviceman was injured and that he was being taken by the Russian forces for talks.

He told Reuters that weapons on the base had been placed in storage.

Earlier this month, Mamchur marched his unarmed troops out of the base and toward Russian forces, challenging what had become a five-day siege. As a result of that gambit, the Russians allowed his men to retain at least symbolic control of the base.

Ukrainian defense secretary Andriy Parubiy said Wednesday the country was making preparations to remove its servicemen from the disputed region, but wanted Crimea to become a demilitarized zone before moving troops out of the area. 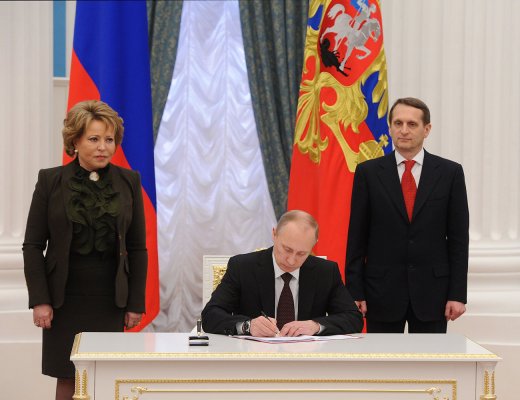 Russia OKs Monitors in Ukraine
Next Up: Editor's Pick