At about 10:30 p.m. local time, several students managed to scale the three-meter high barricades around Hong Kong’s “Civic Square,” a time-honored focal point of peaceful protest in the Chinese Special Administrative region, but which had been shuttered since July.

“This is a violation of human rights,” said student leader Alex Chow over a loudspeaker, of police refusing to let those inside leave to use the bathroom or get food and water. Chow was arrested on Saturday for his role in the disturbance.

Some 2,000-3,000 supporters remained in the area surrounding the square, but Yvonne Leung, spokesperson for Hong Kong University student union, called for more to arrive. “Concern is not enough,” she said. “We need 10,000 people here.”

Since British colonial rule ended in 1997, Hong Kong has been governed under “one country, two systems,” and enjoys significant autonomy and various freedoms unthinkable in mainland China.

But democracy activists are demanding the right to choose the city’s top post of Chief Executive by 2017. Beijing has agreed to a popular vote, but only if candidates are first vetted by a 1,200-strong nominating committee staffed with figures largely perceived as loyal to the Chinese Communist Party.

Hong Kong’s democracy activists treat this as a renege on an earlier promise, and have vowed to foment change by paralyzing the heart of this freewheeling financial hub. Friday’s student-led protests, coming amid a weeklong class boycott, are a precursor to the larger Occupy Central movement slated to begin Wednesday.

Early Saturday, students chanted “Occupy Central now!” and “How can you face the students now otherwise!”

Occupy Central’s leaders, Benny Tai Yiu-ting and Chan Kin-man, addressed the throng at around 10 a.m. “The students were restrained yesterday. But the police have used too much force. We condemn that,” said Tai, according to the South China Morning Post.

Four police officers were injured and 13 protesters were arrested overnight, Police Superintendent Steve Hui Chun-tak told the Post. “Police strongly condemn the violence of protesters, and urge them to leave the site as soon as possible in an orderly way,” he said. By Saturday, all of those arrested had been released apart from Joshua Wong, the leader of the Scholarism student protest group, whose bail was denied.

By Saturday afternoon, many of the students were visibly flagging, milling around listlessly and napping under trees. “Maybe this is not the time,” Jason Tsang, a 22-year-old philosophy student at Hong Kong University, tells TIME of prospects for universal suffrage in 2017. “But we will still be part of Chinese history. Change doesn’t come in just one night.” 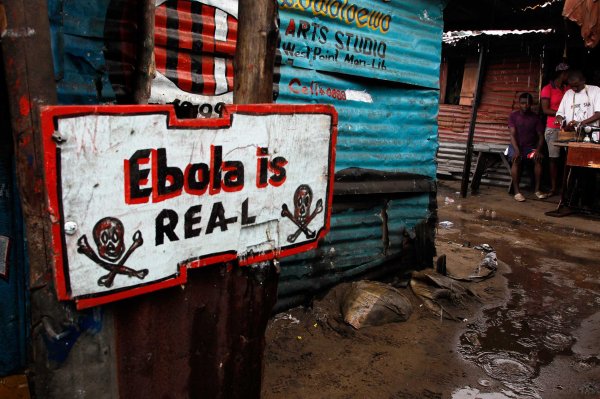 Liberia's Ministry of Sound
Next Up: Editor's Pick