Up until about a year ago I would heartily roll my eyes and snigger whenever a cutesie photo of my husband’s sister’s boss’s baby would pop up on my Facebook feed. I’d exclaim with annoyance while scrolling past yet another indistinguishable ultrasound picture. “Who would post that? Nobody cares what your baby looks like in utero!”

Basically I was the definition of STFU Parents’ target demographic — mid-20s, bored, cynical and dismissive of the totally average children of my acquaintances. But all that changed when I got pregnant with twins and had to fight the urge to Instagram my caesarean pictures.

STFU Parents is a hugely popular blog that parodies the oversharing, mommy-jacking, placenta-picture-posting parents of Facebook. It’s become a cultural phenomenon in the five years it’s been around. The levels of snark on the blog and comment sections are unparalleled, remarkable and often venomous. From mocking babies with “yoonique” names to defending the rights of people to make trite “I’m Pregnant” April Fools’ Day jokes, no parenting behaviour on social media goes unchecked and ultimately ridiculed. Everybody is a potential target, and the threat of appearing on the blog hovers over new parents, silently policing our Facebook statuses before we even post them.

Countless gallons of digital ink have been spilled on mommy blogs about how hard parenting is, about how much it changes you and about how inconceivable the experience is. At the risk of adding to that ink, it’s all true. In my three decades I have never experienced anything more wholly transformative than giving birth and becoming a parent. Certainly, the experience of having twins was probably a bit more intense than most. But becoming a parent felt like, after never seeing water before, I’d been dropped in the middle of the ocean and told to swim away from the circling sharks.

It’s hard to explain just how extreme this transformation is. You know it’s going to be tough going, but it’s the relentlessness that really surprises. The newborn phase is rough. It felt almost menial. I’d gone from attending events where Chelsea Clinton spoke about gender rights in June, to attending to somebody’s dirty diapers in January. My life became a 24/7 cycle of feeding and cleaning. I also had to get used to having my whole day dictated by these two tiny babies — how they felt determined how I felt. I could be well rested and happy but if my babies refused a nap, that good mood was lost in a matter of minutes.

Somebody once asked me why I was still stressed out when my babies were now sleeping through the night and the best way I could put it was that it was like I had misplaced my “off” switch. From the time those babies came into my life, I have been “on.” After I’ve put them to bed and cleaned up after them and made dinner and cleaned up dinner and prepared their food for the next day and expressed milk and finally put myself to bed, I’m lying in the dark waiting for that cry on the baby monitor. I’m worrying that I’ve run out of baby rice for their breakfast. I’m feeling guilty about moving them to their own room before the SIDS safe recommendation of 12 months. I’m doing anything but sleeping. Because I can’t turn that damn switch “off.”

And then the loneliness creeps in. Mothers’ groups can be great, but in those early days of engorged breasts, hormones run amok and two babies who just wouldn’t sleep, the thought of having to put my best foot forward to a group of single-babied strangers was a bit too much for me.

While we were incredibly lucky to have our families come from overseas to help for many months, they had to leave eventually. When they did, the little temporary village I had constructed around myself crumbled. So I turned to the one village that is accessible to anybody with an Internet connection — Facebook.

I’ve struggled with the unspoken rules of social media parent behaviour from the beginning. When you’re part of a generation that’s come of age posting pictures of our morning muesli on Instagram, having to be tight-lipped about two babies coming out of my body was the most surreal and repressive feeling.

I’m now a pretty active member of parenting groups on Facebook, in particular ones for multiple births and parents of premature babies. They’ve provided endless comfort, reassurance and wisdom for me, from people who understand what this road is like. These are people who I would never have met without the aid of Facebook. But it took me a long time to even join these groups because I’ve been so afraid that my friends would see me contribute there and label me an “STFU Parent.”

While I don’t doubt the title “STFU Parent” is well deserved for people who post pictures of their baby’s poop, it’s important to see the ripple effect its had on standard, non-over-sharing parents who are struggling but are too afraid to say anything. In a world where we are becoming more individualistic and isolated, and standards of parenting are becoming more and more rigorous and unattainable, a blog like STFU Parents can serve to just reinforce that solitude and those unfair standards. We’re already pretty alone, now we can’t use social media to reach out? We can’t share certain kinds of pictures, we can’t share pictures too frequently, and we can’t name our children certain things. Add this to the other myriad expectations we already face around breastfeeding, sleeping, baby-wearing, vaccinations, introducing solids, meeting milestones, discipline and countless other things, and modern parenting looks more and more impossible.

Taryn Charles is a crème brûlée connoisseur who lives in Melbourne, Australia with her husband, two daughters and two cats. 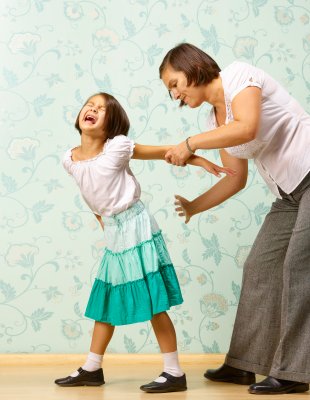 I Dumped My Friend Because She Spanked Her Kids
Next Up: Editor's Pick