Sometimes the Government Puts Money in Our Pockets

The percentage of women who get free birth control has skyrocketed since Obamacare went into effect, providing new ammunition for the political wars over Obamacare as well as the cultural wars over birth control. But there’s been almost no attention paid to the practical effect of this trend: It’s the equivalent of a modest tax cut for millions of women whose insurers used to require co-payments. It’s putting money in ordinary people’s pockets.

These days, the big economic story is about inequality, about a recovery that’s benefited the rich more than the poor, about middle-class wages that haven’t increased in fifteen years. It’s an important story. But the storytellers often overlook a variety of public policies that have helped offset the structural trends widening the gap between the rich and the rest. “Instead of promoting equality,” Tom Edsall wrote in a recent New York Times jeremiad, “public policy has…bestow[ed] the benefits of growth on the very few.” In fact, the government has put money into ordinary people’s pockets in all kinds of ways.

The most obvious way has been tax cuts. President Obama’s 2009 stimulus bill—a topic I’ve discussed at some length—included $300 billion in tax cuts, mostly for the non-rich. The centerpiece was called Making Work Pay, which provided up to $800 a year for the bottom 95% of working families, and was later converted into a payroll tax credit worth up to $2,136 a year before it expired in 2012. Most stimulus tax cuts were “refundable,” which meant low-income workers who don’t pay income taxes—the “47 percent” that Mitt Romney was caught denigrating on video—would be eligible to benefit. When Obama famously told former House Majority Leader Eric Cantor “elections have consequences, Eric, and I won,” he was talking about refundable tax cuts for the poor, which House Republicans opposed but could not block.

This extra money for the poor and middle class doesn’t show up in charts illustrating how the rich are vacuuming up all the recovery’s income and wealth. Those charts and the pundits who love them also tend to ignore the impact of Obama’s tax hikes on the rich, especially his repeal of the Bush tax cuts on income over $400,000. In his Times essay, titled “America Out of Whack,” Edsall speculates at length about the impossibility of redistributive taxation in modern Washington, somehow failing to mention that it just happened in a big way last year. As Zachary Goldfarb calculated for a Washington Post piece on inequality in July, repeal cost the average member of the top 0.1% income bracket nearly half a million dollars.

Obamacare is also financed by hefty new taxes on the rich, including a 3.8% hike on investment income and a 0.9% hike on earned income above $250,000. But its main push against inequality will be its health benefits for the uninsured and underinsured. Free birth control is just one example. There’s also free primary care and other preventive services. Families up to 138% of the poverty line are now eligible for Medicaid benefits in participating states. The law also eliminated the “donut hole,” reducing drug costs for seniors. None of this will show up in the inequality data, but it all helps make ordinary Americans less financially insecure. And so far, Obamacare insurance premiums have been significantly lower than expected, which means more money in ratepayer pockets. Jason Furman, chair of the Council of Economic Advisers, says the combination of Obamacare plus progressive tax changes has offset a decade’s worth of rising inequality.

There are many less memorable ways that public policy has tried to narrow the gap. For example, the stimulus, if you’ll pardon my obsession, also sent $250 checks to retirees and disabled veterans, increased Pell Grants for low-income students by more than $600, and expanded unemployment benefits by $25 a week. Oh, and the stimulus—along with the much-maligned Wall Street bailouts and the Federal Reserve’s aggressive monetary policies—helped prevent a depression, a very good thing for the poor and middle class as well as the wealthy and the Dow. The 10 million new jobs created in this recovery didn’t all go to rich people.

The stimulus also financed energy-efficiency retrofits of more than 1 million low-income homes, which will save families money and power for decades to come. And beyond the stimulus, the Department of Energy estimates that the Obama administration’s new energy-efficiency mandates for refrigerators, air conditioners and dozens of other appliances will save consumers $450 billion on their electric bills through 2030. The administration’s strict fuel-efficiency standards for cars and light trucks are expected save drivers another $500 billion. That’s real money.

Even the federal response to the foreclosure crisis, widely perceived as an abysmal failure, has provided financial help to millions of Americans in need. The most important move, widely perceived as a gift to undeserving corporations, was the $400 billion government bailout of Fannie Mae and Freddie Mac, which kept mortgage credit flowing at a time when no one else would provide it, averted a dramatic increase in mortgage rates, and helped 26 million homeowners reduce their monthly payments by refinancing their mortgages by 2014. Federal programs like HARP (which helped 3 million of those homeowners refinance) and HAMP (which helped modify another 1.3 million loans) were slow and often inefficient, but low mortgage rates—maintained by the Federal Reserve’s aggressive purchases of mortgage-backed securities as well as the government backstop for Fannie and Freddie—meant money in the bank for anyone with an adjustable-rate mortgage.

Reasonable people can disagree about whether government should be in the business of redistribution—what Obama called “spreading the wealth” in his 2008 chat with Joe the Plumber—but we should recognize that it is. The inequality trends, as severe as they are, would be far more severe without government intervention. Yes, the average CEO earns almost as much in a day as the average worker earns in a year, but government—through progressive taxation, the safety net, public education and other public services, and the policies of the last five years—has been pushing back.

Is it pushing back hard enough? Well, reasonable people can disagree about that, too. 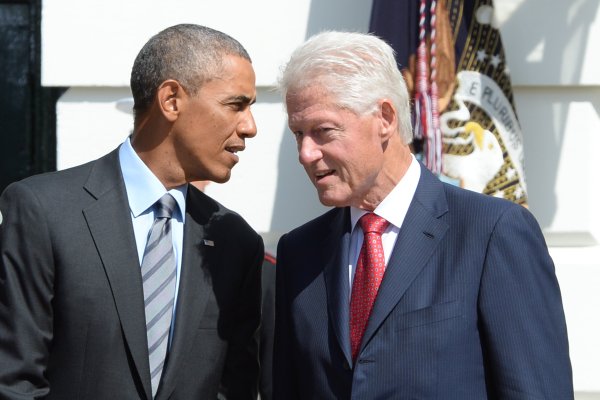 Larry Summers: Obama and Clinton Are Very Different Bosses
Next Up: Editor's Pick