For many Americans, mass shootings in malls, movie theaters and schools seem commonplace today. They’re fixtures of newscasts and are routinely referenced by gun control advocates in Washington lobbying for more restrictive laws on firearms. But the notion that they’ve been increasing has been mostly anecdotal. For all the discussion of gun violence in the U.S., the federal government has never collected information on mass shootings in one place.

But on Wednesday, the FBI released a report doing just that, including analyses of “active shooter” incidents and annual totals of casualties since 2000, all of which seem to point to one conclusion: The U.S. is experiencing more mass shootings than ever.

The FBI identified 160 “active shooter” incidents and 1,043 casualties between 2000 and 2013, finding that an average of 6.4 incidents occurred in the first seven years, and 16.4 occurring in the following seven.

“I was surprised that we identified that many incidents overall,” says J. Pete Blair, a Texas State University criminal justice professor who co-authored the FBI report. “I think it speaks to the fact that while there is interest in the media, many incidents don’t get covered, especially if they result in few injuries or don’t draw the body count of others.”

Seventy percent of the incidents identified occurred either inside a business or an educational environment, like a public school or a college campus. Sixty percent were over by the time police arrived, all but two involved a single shooter, and in 40% of them, the shooters committed suicide.

But at least two prominent criminologists have taken issue with the FBI report’s findings. James Alan Fox, a Northeastern University criminal justice professor, and Grant Duwe, a director of research for the Minnesota Department of Corrections and author of a book on the history of mass murder in the U.S., are both known for being mass shooting contrarians. And both think the FBI numbers are misleading.

“These events are exceptionally rare and not necessarily on the increase,” Fox says.

One of the problems, they say, lies with the definition of “active shooter” and “mass shooter.” The FBI report analyzed “active shooter” incidents generally, a term defined by the federal government as an individual actively engaged in killing or attempting to kill others in a confined and populated area. (The FBI report modified that definition a bit to include multiple individuals as well as events in locations not considered “confined.”)

The problem in conflating the two terms, Fox argues, is that an active shooter doesn’t necessarily have to kill anyone. And in fact, only 64 incidents involving “active shooters” met the federal government’s definition of a “mass killing,” in which three or more people were murdered in a single incident. In 31 incidents identified by the FBI report, no one was killed.

“A majority of active shooters are not mass shooters,” Fox says. “A majority kill fewer than three.”

If active shooters are removed from the equation, Fox says, mass shootings in fact have not been rising over the last few decades, and both the number of incidents and the number of victims has remained relatively steady since the 1970s.

Fox and Duwe are also critical of the report’s methodology. To collect many of the incidents, the FBI’s researchers often combed through news reports. But the term “active shooter” has only been in use within the last few years, Fox says, which may have skewed the numbers in favor of more recent events, possibly making it look as if shootings are rising.

An additional problem may also be the availability of digital news sources that could make it easier for researchers to find more recent incidents. For example, the FBI report only identifies one active shooter incident in 2000. Duwe’s analysis includes two.

“The point is if you go back to those earlier years, I don’t think they’ve gotten them all,” Fox says. “Recent years are easier to find.”

Blair, the report’s co-author, says he and the FBI has tried to make it clear that there’s a distinct difference between active and mass shooter. He says the agency decided to focus on active shooters generally in part to give law enforcement agents guidance on how those incidents were resolved, which could help them in future cases.

“The two terms have been confounded not just in the media, but by the public in general,” Blair says. “They interpret active shooter to mean a mass murder, a mass shooting. They could turn into that, but not all of them do.”

Blair acknowledges it’s possible the numbers have been skewed due to the availability of more recent news reports, but he disputes the argument that the numbers are biased because the term “active shooter” is more common today. Blair says researchers not only searched for “active shooter” in news articles but also for terms like “mass shooting,” “mall shooting” and “spree shooting.”

“Active shooter is one of the terms we search for, but it’s one of the least productive,” Blair says.

Not all criminologists dispute the FBI’s findings. Adam Lankford, a criminal justice professor at the University of Alabama who studies mass shootings, says he believes the numbers paint an accurate picture of what’s occurring nationwide, and that in fact criminologists like Fox are including cases of drug deals gone wrong and family disputes in their analyses, which he believes skew their own numbers.

“The public wants to know whether more incidents like what happened at UC-Santa Barbara [involving 22-year-old Elliot Rodger, who killed six people] or Sandy Hook are happening more often,” Lankford says. “And I think the evidence says yes.”

Duwe does acknowledge that 2012 on its own was one of the worst years for mass shootings in U.S. history. According to his analysis, there were eight that year—including 12 people killed and 58 wounded in a movie theater in Aurora, Colo., and 27 killed and two wounded at Sandy Hook Elementary School in Newtown, Conn. Sixty-six people total were killed in mass shootings that year, Duwe says. (In contrast, the FBI listed 21 “active shooter” incidents and 90 people killed.)

But he says there’s been a “regression to the mean” since then, meaning there have been fewer mass shootings since 2012 and a return to more average levels. According to Duwe’s analysis, there were just three mass shootings in 2013 with 22 killed, and he says similar declines happened after 1991 and 1999, both high years for mass shootings in the U.S.

Duwe believes the perception Americans have that there are more mass shootings than ever can be chalked up in part to a faulty collective memory.

“We may just have historical amnesia,” he says. 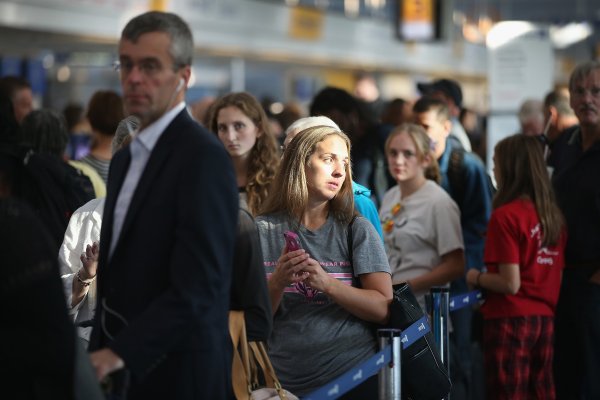