What a difference a year makes. Friday, the U.K. Parliament has been recalled to debate joining a U.S.-led military intervention, the same topic that convened Members of Parliament for an emergency session on Aug. 29, 2013. Back then, everyone expected a majority of MPs to rubberstamp the action, just as the MPs gathered Friday in the House of Commons are predicted to approve today’s motion.

These scenarios may appear near-identical, but they differ in one glaring respect. When British parliamentarians served up a surprise and rejected involvement in the planned U.S. air strikes against the Syrian regime last year, they triggered a chain of events that saw U.S. President Barack Obama abandon his mission at the 11th hour in favor of a new round of diplomacy. The consequences of that swerve are still being assessed, leaving Syrian President Bashar Assad in power and, according to proponents of the intervention, allowing jihadist groups such as the Islamic State of Iraq and Greater Syria (ISIS) to grow. Others maintain that the aborted campaign would have simply fueled the jihadists’ rise. Another, wide strain of opinion in Westminster and among the British public looks back at Britain’s 2003 decision to join the U.S. in toppling Iraq’s Saddam Hussein as a profound error that must never be repeated.

These arguments are even now being rehashed. U.K. Prime Minister David Cameron had barely begun his speech when he was interrupted by veteran Labour MP Dennis Skinner who asked, scornfully, “How long will this war last and how soon will mission creep start?”

There are other such skeptics in the chamber — their numbers will become clear at around 5 p.m. London time, when MPs vote. But here’s one reason why that vote, irrespective of outcome, looks very different to the one that took place 56 weeks ago in the same chamber: the result won’t make a significant difference to American policy.

The U.S. Air Force has been running missions into Syria and Iraq since Monday alongside jets from Saudi Arabia and the United Arab Emirates, targeting ISIS militants as well as infrastructure and supply routes used by the group now occupying extensive territory on both sides of the Syrian-Iraqi border. If British MPs go against predictions again to vote against joining in, these missions will continue. Moreover, the motion under discussion is limited in scope, committing the U.K. to air strikes in Iraq and specifically ruling out extending any action into Syria or deploying combat troops on the ground. Britain has received a direct request for assistance from the Iraqi government that proponents of the motion argue gives the proposed action legitimacy under international law that the strikes in Syria do not necessarily share.

Even so, what Britain decides matters—perhaps not as much as Britons reared on tales of Empire and World War victories are inclined to think, but enough that the U.S. has worked with the U.K. to ease the passage of the motion, accepting its limited nature and careful to say nothing that might make it more difficult for Cameron to unite his own Conservative Party on the issue, coax his Liberal Democrat coalition partners on board and, most importantly, to secure sufficient Labour Party support. It was Labour opposition that torpedoed the 2013 vote. This time around, Labour leader Ed Miliband issued a call to support the motion, partly on the basis that in asking countries in the region to engage, Britain needed to show a moral lead. He added that in helping to oust Hussein, “the Iraqi state that emerged is partly our responsibility.”

That history has made both Labour and Conservatives wary of appearing to yield too easily to pressure from Washington. Cameron acknowledged Obama had “made clear” he wants British support, but based the core argument for British participation on a humanitarian imperative and on British national interest. “If we allow [ISIS] to grow and thrive there’s no doubt in my mind that the level of threat to the country would increase,” he said.

U.S. officials have denied claims made this week by Iraqi Prime Minister Haider al-Abadi of a specific threat by ISIS to attack subway systems in New York and Paris, but the U.S. and the U.K. are both worried about the possibility of blowback. Last month, Britain raised its terror threat level to “severe.” As Matthew Barzun, the U.S. ambassador to Britain, pointed out in an article in the London Evening Standard, published on the eve of the debate, as many as 12,000 citizens from 74 different countries are estimated to have gone to fight with rebels in Syria alone. British security chiefs believe at least 500 Britons have made the journey, including the ISIS member dubbed “Jihadi John,” shown in videos murdering U.S. and British hostages. Those murders and the threat to further hostages still held by the group have strengthened the appetite to tackle ISIS.

In case that appetite falters, the Conservatives, Lib Dems and Labour have all ordered their MPs to support today’s motion, deploying the so-called whip. Rebels can expect reprimands and will certainly be marked down as troublemakers by party officials. This, together with the restricted scope of the motion, should be enough to secure a positive outcome but will also add to the resonance if there is still a rebellion of any size.

Because another reason today’s vote matters is that it marks the beginning of a longer and more difficult decision-making process in a country that has lost faith in military interventions but is also alarmed by appeal of jihadism to its own citizenry. There is little agreement among the political parties about how to counter that trend, and they are divided over the possibility of any action in Syria. There will be a brief moment of clarity later today and, most likely, an announcement of British jets roaring into action. The bigger issue of the role Britain will play in the Middle East will remain urgent and unresolved. 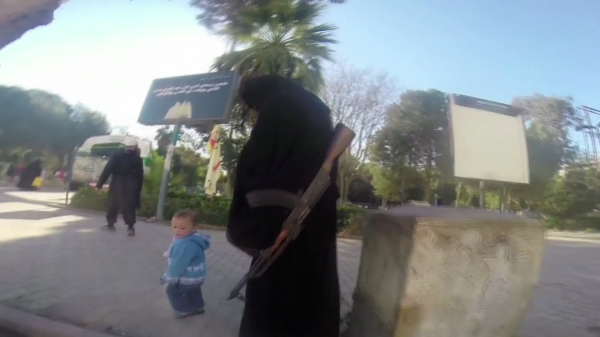 Watch What Life Is Like in an ISIS-Controlled Town
Next Up: Editor's Pick