We Need a Global Health Emergency Corps to Fight Ebola

A worker checks a list of of Ebola relief aid after it was airlifted by the United Nations Children's Fund (UNICEF), on August 23, 2014 in Harbel, Liberia.
John Moore—Getty Images
Ideas
By Jack C. Chow

The West Africa Ebola outbreak is fast becoming a disease of mass destruction. A recently issued projection from the U.S. Centers for Disease Control and Prevention (CDC) forecasts a worst case scenario of 1.4 million cases of Ebola by late January if the disease transmission cycle isn’t broken soon. The disease may become so widespread that it may become permanently entrenched and spread elsewhere.

President Obama’s emergency package that sends 3,000 military personnel and 1,700 beds brings badly needed help, but that aid could take weeks to arrive. A further problem is that intervention is slated primarily for Liberia, leaving out Sierra Leone and Guinea. Lopsided U.S. aid on the Liberia side could trigger two unintended consequences: the acceleration of the epidemic in Sierra Leone and Guinea, which in turn could trigger mass migrations of their people clamoring for care at the U.S. hospitals.

In spite of the U.S. commitment, other countries have yet to commit comparable aid to the other two countries or even to the response at large. The UN is stepping in to bolster the response, but the UN and its health agency, the World Health Organization, are hampered by their lack of ability to render direct medical treatment to patients. The battles along the medical front lines are being borne by non-government organizations such as Doctors Without Borders, taking over for the decimated ranks of local health workers. All are besieged by the extent and intensity of the struggle, and if CDC’s ominous scenarios were to be realized, even American aid may not be enough to contain the spread.

To confront Ebola and future waves of “flashdemics” — high velocity, high lethality outbreaks — a new intervention strategy is needed: The creation of an international medical ground force that can be immediately dispatched to stricken zones, endowed with authority to enter countries unimpeded and begin operations. This rapid response unit can quickly and directly treat the ill, humanely care for the dying, and prevents spread to the vulnerable. This unit would implement strategies worked out in advance from a response playbook with pre-determined roles for responders.

A medical reserve force could terminate nascent outbreaks quickly and spare further cost in lives and resources. A stricken country can then recover and rebuild from the emergency response to strengthen its health system against future threats. A coalition of countries, especially those with advanced health systems, could create a force in short order by contributing teams from existing agencies.

However, this kind of badly needed at-the-ready, direct intervention capacity, at a national or regional scale, does not currently exist. International aid organizations are spread out over many regions and are focused on delivering long term aid, not emergency flashpoint response. The largest national donors, prominently the U.S., conduct health aid programs with favored nations, but run relatively few operations in countries whose politics are hostile to the west.

Unpreparedness has left impoverished countries vulnerable to outbreaks that could readily leapfrog worldwide. To counter the potency of Ebola and other powerful diseases, a new health defense strategy is needed that brings immediate, concerted interventions across whole regions. Waiting for individual governments to act alone is simply too risky. Creating a new global health emergency corps should be a top priority for world leaders.

Jack C. Chow is a former assistant director-general at the World Health Organization on HIV/AIDS, tuberculosis, and malaria (2003-2005), and former U.S. ambassador on global health and HIV/AIDS (2001-2003). He is presently a professor of global health at Carnegie Mellon University’s Heinz College for Public Policy, and is based in Washington DC. 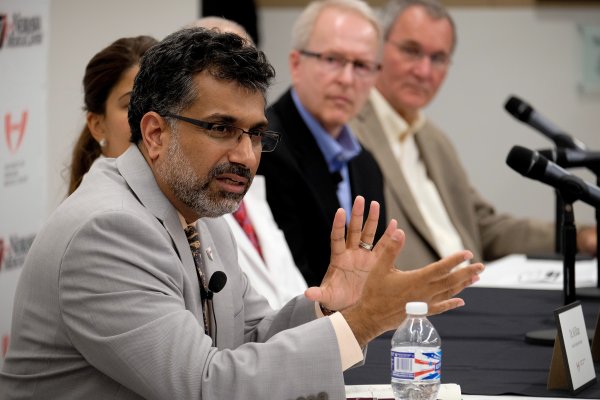