Attorney General Eric Holder makes a separated during a major financial fraud announcement press conference on Aug. 21, 2014 at the Justice Department in Washington, DC.
Alex Wong—Getty Images
Ideas
By Nick Gillespie
Nick Gillespie is the editor in chief of Reason.com and Reason.tv and the co-author with Matt Welch of The Declaration of Independents: How Libertarian Politics Can Fix What’s Wrong with America.

So Eric Holder is stepping down as attorney general of the United States, reportedly just as soon as a successor is named and confirmed.

It’s a shame that it can’t happen sooner.

Despite some positive actions — refusing to enforce the Defense of Marriage Act, a federal law that is plainly discriminatory, and calling for long-overdue sentencing reform, for instance – Holder’s tenure has been marked by a disturbing mix of duplicity, incompetence, and obliviousness.

Which is another way of saying that he was a thoroughly typical attorney general, a cabinet position that has long been held by individuals whose first loyalty is to the president that appointed them rather than to the Constitution they swear to defend.

From A. Mitchell Palmer (who rounded up and deported real and imagined Communists) to John Mitchell (convicted on perjury charges related to Watergate) to Janet Reno (who ordered the disastrous assault on the Branch Davidians and spent years threatening to censor cable TV), the position has long been a holding tank for low-performing miscreants.

Early on his tenure, Holder told Congress that federal agents wouldn’t raid and arrest proprietors of medical marijuana dispensaries that were complying with state laws (all pot is illegal under federal law). Yet through 2013, the Obama administration was averaging 36 medical marijuana prosecutions a year, compared to 20 a year for the George W. Bush administration. Either Holder directed the Department of Justice and was lying to Congress or he was an administrator whose subordinates routinely disobeyed him. Neither possibility is comforting.

In 2012, he was held in contempt by a bipartisan vote in the House of Representatives for refusing to testify about the “Fast and Furious” scandal emanating from the Phoenix office of the Bureau of Alcohol, Tobacco, Firearms, and Explosives (BATF). Fast and Furious involved government agents allowing illegal sales of guns that were later found at the scene of the murder of a Border Patrol agent. The BATF is part of the Department of Justice and Holder has given conflicting statements about the operation.

Holder managed to earn the ire of progressive politicians such as Sen. Elizabeth Warren (D-Mass.) and Sen. Bernie Sanders (I-Vt.) when he admitted that some Wall Street banks were not only too big to fail but too big to jail. The sheer size of some institutions, he told Congress, “has an inhibiting influence — impact on our ability to bring resolutions that I think would be more appropriate.”

Arguably more disturbing was Holder’s central role in signing off on the secret monitoring of Fox News’ James Rosen and other journalists and his staunch defense of National Security Agency surveillance programs (even when federal oversight boards decreed them unconstitutional and ineffective). It took a 13-hour filibuster by Sen. Rand Paul (R-Ky.) to get Holder to acknowledge in plain language that there were in fact limits to the president’s secret kill list (the existence of which is itself deeply disturbing).

That Holder has moderated on some of these issues — just a couple of weeks ago, Holder voiced support for NSA reforms that would “provide the public greater confidence in our programs and the checks and balances in the system” — only drives home just how situational his ethics and actions always have been as attorney general.

Back in 2007, then-Sen. Barack Obama rightly attacked the risible performance of Attorney General Alberto Gonzales, whom he said conceived of his job as being “the president’s attorney” rather than “the people’s attorney.”

Yet that’s exactly how Eric Holder has behaved during his time in office. Holder exists to protect the president and his policies. Worse still, his successor will almost certainly take up exactly where he leaves off. 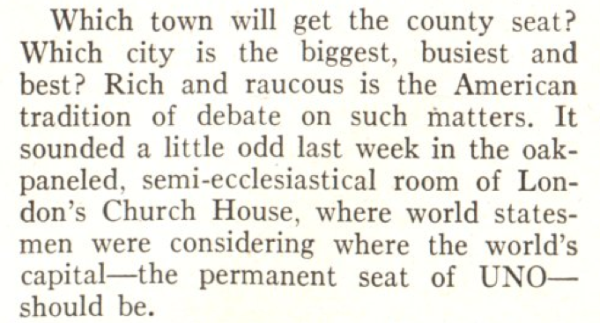 U.N. Headquarters in South Dakota: How It Could Have Happened
Next Up: Editor's Pick