Eric Holder Will Leave a Legacy of Civil Rights Activism

Attorney General Eric Holder showed in his second week in office that he planned to approach the job of top law enforcement officer differently.

“In things racial we have always been and continue to be, in too many ways, essentially a nation of cowards,” he said, in prepared remarks to Justice Department staff on Feb. 18, 2009. “Through its work and through its example this Department of Justice, as long as I am here, must—and will—lead the nation to the ‘new birth of freedom’ so long ago promised by our greatest President.”

The remarks earned a backlash from the West Wing staff around President Barack Obama, but Holder’s attitude never changed, nor did his determination to use his office to highlight the injustices that continued to exist under his tenure. “We’ve got to have the guts to say that these are issues that need to be fixed,” he told a group of black journalists during a meeting at the White House last year.

As news broke Thursday of Holder’s decision to retire after almost six years in the job as the first black leader of the Justice Department, civil rights activists were quick to praise him. “No attorney general has demonstrated a civil rights record that is similar to Eric Holder’s,” Al Sharpton, the head of the National Action Network, told reporters in Washington.

“Attorney General Holder never shied away from the issues that greatly affect us all,” Myrlie Evers-Williams, the widow of slain activist Medgar Evers, said in a statement.

Through his tenure, Holder often referred to the portrait of his predecessor Robert F. Kennedy, which hangs in his office, as a guiding light for him. Like Kennedy’s efforts to address civil rights issues in the 1960s, Holder’s department made criminal justice reform a priority, and has worked aggressively to continue to challenge limits on voting rights after the Supreme Court overturned parts of the 1965 Voting Rights Act. Holder has also launched a number of high profile investigations of the conduct of local police departments in about 20 cities, often obtaining consent agreements that change police conduct.

In a major address to the American Bar Association in August of 2013, Holder did not just lay out a set of reforms to reduce prison terms and improve rehabilitation efforts, but he also challenged the country for what he saw as moral failures. “One deeply troubling report… indicates that in recent years black male offenders have received sentences nearly 20 percent longer than those imposed on white males convicted of similar crimes,” he said. “This isn’t just unacceptable—it is shameful. It’s unworthy of our great country, and our great legal tradition.”

Before speaking those words, he had given a draft of his remarks to Obama during a vacation on Martha’s Vineyard. In an interview with TIME earlier this year, Holder recalled Obama’s reaction. “It’s a gutsy speech,” the President told him, encouraging him to deliver the speech.

Holder also spoke multiple times about the discrimination he believed he had experienced as a black man. “I am the attorney general of the United States, but I am also a black man,” he said during a visit to a community meeting in Ferguson, Mo., this year, where he recounted his anger at being stopped by police while running down the street in Washington, D.C., and while driving on the New Jersey turnpike. “I remember how humiliating that was and how angry I was and the impact it had on me.”

Like many other efforts, he spoke these words not just as a cabinet secretary but as a social activist, urging the country to be better. “The same kid who got stopped on the New Jersey freeway is now the Attorney General of the United States,” he said in Ferguson. “This country is capable of change. But change doesn’t happen by itself.” 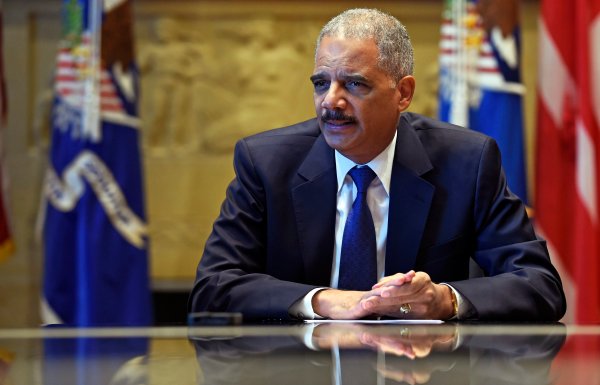 Eric Holder to Resign
Next Up: Editor's Pick