I don’t like writing with other people, because they always want to get things right. This takes time and effort, which is not why I got into writing. I got into writing so people could say, “I love your writing,” not, “I love the writing you did with that other guy.” Besides, my goal is to write as many things as quickly as I can, since I’m paid by the word. The word. The. Word.

But I was intrigued by my friend Joshua Wolf Shenk’s new book, Powers of Two: Finding the Essence of Innovation in Creative Pairs, since its title had lots of words I could get paid just to type. He argues that genius isn’t the result of lonely struggles but rather of dynamic collaborations, like the one between John Lennon and Paul McCartney. So instead of toiling alone, I’d have greater success by finding my own duo like Lennon and McCartney and being their Ringo Starr.

Shenk asked me what projects I couldn’t accomplish alone. I’ve always thought that the best thing to write is a song, since unlike columns, people not only enjoy them multiple times but often remember them. When I give speeches, no one in the audience screams, “Read ‘Call Me Plenipotentiary!'”

After talking to Shenk, I saw a tweet from Kenny Loggins saying he was a “big fan” of mine, which, to be honest, was slightly annoying since if he had just sent it 25 years earlier, I’d have gotten laid like crazy in high school. So I contacted him and asked if he wanted to write a song together, possibly one that he could record with his excellent new band Blue Sky Riders. He asked if I played any instruments. I do not. Then he asked if I knew anything about melody. I do not. Nevertheless, he agreed. “This is lightning in a bottle. Anything can happen,” he said. “And I’m interested in promoting the band.”

I showed up at the sprawling Loggins estate in Santa Barbara, Calif., at noon and was delighted to discover that songwriting is just like column writing, in that much of the time is spent procrastinating. We made lunch choices, opened windows, moved a fan around, chose the pens we liked and moved the fan around some more. Since he has a lot of experience collaborating–with Jim Messina (“Your Mama Don’t Dance”), Michael McDonald (“What a Fool Believes”), Melissa Manchester (“Whenever I Call You ‘Friend'”) and every musician alive in 1985 (“We Are the World”)–I followed his lead and also ordered the fish tacos.

Then we picked a phrase to work the song around. It is important to note that the phrase we chose came from thinking about people we know and not about our own lives. The phrase was, “She loves me for my money. And I’m good with that.”

Kenny Loggins got out his guitar and started saying that line rhythmically, then he started singing it, and then his eyes rolled back a little and he started singing in tongues. I contributed by gently tapping on the table in a Ringo Starr way and saying “That’s cool” in a Ringo Starr way. It was less like collaborating in the sense that Shenk outlines in his book and more like collaborating in the sense of a music teacher with young children. He explained what a bridge was by playing “Footloose” one foot from my face. I still don’t know what it is, since all I could think about was how incredibly cool my job is compared with punching my card eight hours for what?

I kept suggesting funny lines for Kenny Loggins’ melodies, and he kept telling me, “It doesn’t sing,” which is a much nicer way than my editor has for saying, “It’s not funny your way.” But it turns out that lyrics have to not only rhyme and scan but also have a certain vowel sound, which, apparently, sleep apnea lacks. Also, Kenny Loggins had this bad habit of adding romantic and sensitive lines to our funny song. “It’s a good habit if you like women,” he said. “But I bet a lot of guys like you.”

We wrote for 11 hours, which Kenny Loggins said is a little long for a song and I told him is way too long for a column. I suspect I may not have proved to be a brilliant lyricist, largely due to the fact that the chorus of our song is, “Whoa oh oh oh oh oh/ Whoa oh oh oh oh oh.” When I left his house, exhausted and thrilled that we had a song, I asked Kenny Loggins if he had as good a time as I did. “It was a little painful,” he admitted. “When I collaborate with Mike McDonald, it’s more than the sum of the parts. With the two songwriters in Blue Sky Riders, we call it the fourth person in the room.” With me, it was like one guy in the room and another guy who kept saying, “That’s not funny your way.”

We hope to record “I’m Good With That” in a few weeks and put it up on Time.com, and then play it at the Grammys. Until then, I’ll be taking cowbell lessons. Our collaboration might not have provided the magic that Shenk or Kenny Loggins hoped it would, but I got to watch Kenny Loggins write a song. Now if I can just collaborate with someone on building a time machine, it’s totally going to change my high school experience. 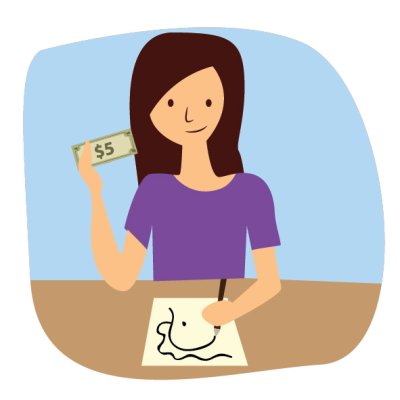 Here's What Happened When I Outsourced My Entire Life
Next Up: Editor's Pick