Peter Tennis is an endangered species. He’s 72, lives in Marietta, Ga., and still works in commercial real estate. He’s a devout Episcopalian who insists we begin our breakfast at the OK Cafe with a prayer. He reads the newspaper every day and clips out the stories he finds interesting. A few years ago, he saw an article in the Atlanta Journal-Constitution about a 15-year-old black kid who had been sent to adult prison for participating in an armed robbery. He started corresponding with the young man, then visited him in prison and led a group to pray for him at St. David’s Episcopal Church. He found this work so rewarding that he began contacting other prisoners he read about, visiting them in prison, helping them where he could; he corresponds regularly with “three prisoners at a time” in Georgia. There isn’t a dramatic climax to Pete’s prison work. He just does it. His wife Margot is similarly involved, teaching English to Latino adults. “I once knew a guy named Railroad Bob, pretty down and out,” Pete says. “But he said something I’ll never forget: ‘We teach best what we desperately need to learn.'”

I mention Peter and Margot Tennis because they reached out to me when they heard I was going on another of my annual road trips–this time through the South. Pete offered to organize a meeting of his friends and co-workers to talk politics with me in Marietta. That’s how these road trips work; TIME readers provide the itinerary. But a certain sort of TIME reader: Dr. Richard Merwarth, 76, in Pittsboro, N.C.–who organized a meeting for me with 200 or so senior citizens at the Galloway Ridge retirement community–is another. What Pete and Dick have in common is that they are active citizens–not activists, just people who think part of their job as Americans is to be involved in stuff. It’s probably not an accident that they’re both in their 70s: they are among a dwindling but vital minority in the country. They grew up believing that public life, including politics, was a group activity, something you share with your neighbors. That isn’t true anymore. Politics is now a virtual activity. It happens, mostly via ads, on television and the radio. That makes it a lot easier for most people: nothing is expected of them but a vote. “We just don’t do many events anymore,” a campaign manager in Georgia told me. The candidates’ time is better spent dialing for dollars. That’s nothing new, but gradually politics–and political reporting–has become an arid exercise, the tabulation of money raised and ads promulgated (and invisible phone banks microtargeting voters, which is something journalists can’t quantify). It’s hard to imagine that the Founding Fathers–who staged raucous rallies complete with beer, barbecue and juicy speeches–would recognize the process.

A politically eclectic group gathered in a bland room at the East Cobb, Ga., county offices, 25 people, mostly friends and real estate colleagues of Peter Tennis. They were mostly conservative, though not angry Tea Party sorts. There were a handful of moderate liberals, too, who weren’t as forceful as the conservatives. “Politicians just want to throw money at things,” said Jeff Marshall, 54, a recent Connecticut transplant. “I’m just not convinced that government can do all that very effectively.”

This is not an uncommon sentiment, of course. But a small-business owner named Charles Bonds, 41, put some flesh on it, regaling the group with the troubles his company, with 51 employees, was having with the Affordable Care Act. He wanted to provide health coverage and was required to under the law. But his private insurer had raised premiums 57.8%, and while the rates in the local Obamacare exchange were better for his employees individually, the law said that companies with more than 50 employees had to provide the insurance. The obvious answer was to fire two people, hire some temps and subsidize his employees to get their insurance through Obamacare. “And even if we did that, the feds require us to report which of our employees haven’t gotten health coverage–which is sort of like snitching on them.”

Eric Flamm, 58, a computer consultant, said he thought the whole idea of mandated health care was “flagrantly unconstitutional,” and he was “pessimistic about ever getting the federal government to shrink.”

The other big issue was a surprising amalgam of immigration and terrorism. Bob Wood, 72, said he was worried that the southern border was porous, that ISIS terrorists were crossing over, that the country was riddled with sleeper cells. “They’re all over the place,” he said. Several others said they were fearful of ISIS and immigrants–no accident, it turned out, since the Republican candidate for U.S. Senate, a businessman named David Perdue, had just launched an ad accusing his opponent, Michelle Nunn, of supporting “amnesty” and an immigration bill that wouldn’t seal the southern border and might allow ISIS terrorists in. (The bill, which was passed with the support of 14 Republican Senators, provides “legal status” but not citizenship for undocumented workers and also would spend an additional $38 billion on increased border security.)

The Perdue ad is almost hilariously despicable. It also accuses Nunn–the daughter of former Senator Sam Nunn–of “funding organizations linked to terrorists.” This allegedly occurred while she was the president of George H.W. Bush’s Points of Light Foundation. The real story is TCFP: too complicated for politics. Users of eBay were offered a list of charities to support via Points of Light. In the end, they chose to give $13,500 to a federally approved organization called Islamic Relief USA, which has “ties” to an international organization of the same name, which allegedly has “ties” to Hamas. Said Neil Bush, the chairman of Points of Light: “To attack an organization founded by my father … to smear our organization for political gains, is in my opinion shameful.” (Bush the Elder has endorsed Perdue.)

In North Carolina, a few days earlier, I attended an actual political rally. It was staged by Republicans in Greensboro and featured their U.S. Senate candidate, Thom Tillis, who wasn’t carrying a pitchfork; and neither did Mark Walker, a local minister running for Congress. “It’s sad,” Tillis said, “that we have to be this disappointed in this President.” He criticized his Democratic opponent Kay Hagan–for supporting the Affordable Care Act, diplomacy with Iran, the Senate immigration bill–with a call-and-respond line: “Is that a Senator from North Carolina?” He told his own up-by-his-bootstraps story. (Tillis started on a loading dock and didn’t get his college degree until he turned 36, but he’s been successful in business and is now the speaker of the state legislature.) “I’m optimistic about our country,” he said, running against the right-wing radio trope that the country is in the midst of an Old Testament slide toward damnation.

It sounded to me, at first, like the Republicans had wised up in 2014. They were serving up smoked brisket, not red meat. There was a rationale for this: white women are likely to be the swing group in the North Carolina and Georgia elections. Women tend not to respond to rhetorical violence. Walker, the minister running for Congress, mentioned neither gay rights nor abortion. It was, I thought, grounds for optimism about the growing climate threat of political overheating. But after I saw the Perdue ad in Georgia, I realized that I–like the lovely folks who set up my road-trip meetings–was living in a community-oriented past, where speeches and rallies meant something. Nowadays, a candidate can be all smiles and more-in-sadness-than-in-anger on the stump, and run ads that are sicker than swamp gas on television, where it really counts. 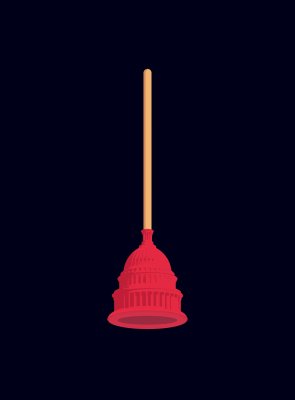 The Politics of Nothing
Next Up: Editor's Pick