A California court issued a milestone ruling Sept. 24 that may restore public access to a beach that requires traveling across privately owned land, the latest turn in a multi-year legal frenzy that has pitted the surfers who cross the property against the billionaire who owns it.

Judge Barbara Mallach of San Mateo Superior Court ruled against venture capitalist Vinod Khosla, a co-founder of Sun Microsystems, who was sued by the nonprofit Surfrider Foundation after his property manager blocked the public from accessing a beloved seaside spot known as Martins Beach.

At the center of the controversy is a low-slung metal gate that sits at the top of Martins Beach Road, an offshoot of the Pacific Coast Highway that is the only way to access Martins Beach from dry land. The road snakes across 53 acres that Khosla bought for $32.5 million in 2008. For two years, his property manager allowed the public to occasionally visit a stretch of sand where locals have gone smelt-fishing and surfing and picnicking for decades. But Khosla allowed the gate to be closed permanently in 2010 after his property manager received a letter from the county demanding that it stay open every day.

The conflict comes at a time when an influx of tech wealth has sharpened class tension in northern California. “[Kholsa] believes that he can find a way to use his wealth and power to strong-arm the situation,” says Chad Nelsen, environmental director of the Surfrider Foundation.

Khosla doesn’t own a home on the land and says he has no plans to build one. The decision to shut off access to the road was a way to take a stand about what he felt were his basic rights. “This is a case about private property,” Khosla told TIME in an email. “We need to assert our rights and get the courts to clarify them.”

Khosla’s lawyers say they are considering appealing the verdict. “We will continue to seek protection of the constitutional rights of private property owners that are guaranteed by the U.S. and California Constitutions and that have long been upheld by the United States and California Supreme Courts,” his attorneys said in a statement.

Surfrider’s argument rested on a seemingly bureaucratic detail. The organization claimed that under the 1976 Coastal Act, which gave a statewide Coastal Commission jurisdiction over beachfront land, Khosla needed to apply for a development permit in order to close the gate. The commission will often only grant development permits, typically to build a home or another structure, if the public gets an established right of way in return.

“Because they’re in charge of beach development, they’re allowed to do this quid pro quo,” says Arthur McEvoy, a professor at Southwestern Law School in Los Angeles. “They can ask you in trade to dedicate a little easement, if the development threatens to impede public access.”

The tricky matter is that while beaches are widely considered public, people don’t necessarily have a right to cross private property to get there. Cases such as this one set precedents that resonate up and down California’s 840 miles of coastline.

It’s easy to see why Martins Beach is beloved. Its sands wrap around a cove with cliffs jutting out on either end, creating a rare surfing spot protected from the wind and also preventing people from walking to the beach from the north or south. Secluded and full of wildlife, its dramatic rock formations are often blanketed by birds. Seals pop their heads up between surfers and the beach.

For decades, cars that wound their way down the road from Highway 1 paid a small fee to the landowners for parking and frequented a snack shop that has fallen into disrepair. A now-defunct sign advertising $15 parking, the amount Khosla’s employees charged when visitors were allowed, still lays on the ground.

Steve Baugher, Khosla’s property manager, testified at the trial that it was his decision to close the gate. He also testified that he hired security guards to “deter trespassers”; their presence prompted five surfers to defiantly march past them last October to proclaim their right to be on the beach. Known as the “Martin’s 5” the surfers were arrested by the county sheriff but the District Attorney declined to prosecute–inspiring more surfers to take advantage of this legal limbo and hop the fence with abandon.

In California, public access to the beach is protected by the public trust doctrine, a common law that can be traced back to the English crown proclaiming rights to all submerged lands, in order to let the public use the water above them for fishing and navigation.

In an earlier case that went Khosla’s way, a group called the Friends of Martins Beach used a different angle to sue, testing a clause in the state constitution that declares that no entity shall “exclude the right of way to such water whenever it is required for any public purpose.” In a 2013 ruling, another San Mateo Superior Court judge said that because Martins Beach had been part of a land grant that settled the Mexican-American war in 1848, a year before the constitution was adopted, the intentions of that document were immaterial.

Beyond the ongoing court cases, two other avenues may force the drama to a close. One is a bill sponsored by State Senator Jerry Hill, a San Mateo Democrat, that would require the State Lands Commission to consider purchasing the road if negotiations with Khosla for public access fail. Meanwhile, the Coastal Commission, which has been fielding the public’s complaints about the closure of Martins Beach, is asking people to write in about how they’ve used the area in the past. That testimony may prove there’s a historic right of access that Attorney General Kamala Harris can sue to restore on the Commission’s behalf. “The Commission is trying very hard to bring it to a close,” says Nancy Cave, a commission manager who was part of negotiations with Khosla’s team that went nowhere. “We are frustrated, too.”

Khosla notes that he is not the first owner of the property to limit access, pointing out that previous owners closed the gate during certain hours and seasons and even inconvenient days. In court, property manager Baugher testified that he received a letter from the county demanding that the gates be open year round and parking be charged at the rate of $2, what beachgoers paid in 1973. Khosla has also accused Surfrider and the Coastal Commission of attempting to “blackmail and coerce him,” charges both deny. Surfrider emphasizes that Khosla has allowed changes that are far from what his predecessors did—like painting over a billboard that used to welcome people to come down from Highway 1 to the beach, turning it into a dark green slab.

Surfrider had hoped that the court would also fine Khosla for failing to apply for a permit but Mallach declined, saying that those who closed the gate had acted in good faith that they had the legal right to do so. Nonetheless, Surfrider championed the decision as a “huge victory.”

“Today’s court decision upholding the Coastal Act is an important victory for Martin’s Beach and ultimately strengthens the public’s right to beach access in California,” Angela Howe, Surfrider’s legal director, said in a statement. “The Surfrider Foundation remains vigilant to protect beach access rights, not only in this case, but also in other cases where the beach is wrongfully cut off from the public.” 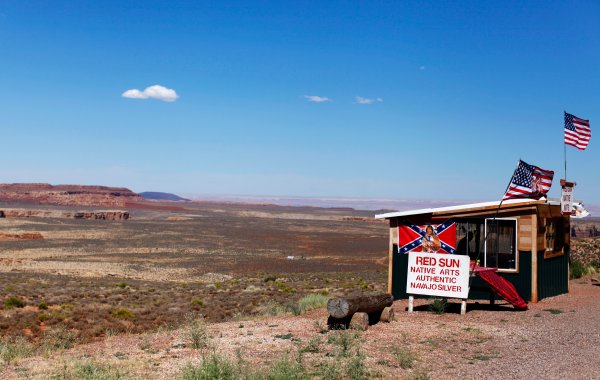 Navajo Nation to Receive $554 Million Settlement From U.S.
Next Up: Editor's Pick