This article originally appeared on xoJane.com.

When I woke up yesterday, my Facebook feed was buzzing with the news of Emma Watson’s “groundbreaking speech.” On September 20, Watson used an emotionally stirring speech at the United Nations to launch He For She, a new campaign that urges men to “speak out about the inequalities faced by women and girls.” People who never mention the words “feminism” or “women’s rights” were suddenly interested.

More specifically, the campaign centers around a website where men and boys can acknowledge that gender equality is a human rights issue and pledge to fight the inequality that women and girls face. On the “Take Action” page, the site encourages users to tweet and Instagram with the hashtag #HeForShe. Beyond that, there is little discussion of what the men who sign this pledge can actually do to improve the lives of women.

“I am so excited about #HeForShe,” one random girl from my sorority wrote, “because it finally shows that feminism isn’t about hating men. I love men!” “Emma Watson gives feminism new life,” read one CNN headline. Another blog noted that she completely changed the definition of feminism while dressed in Dior. Media outlets that had only previously used the word “feminist” to describe hairy-legged stereotypes were now salivating over a newer, hipper, prettier feminism based entirely on an 11-minute speech at the United Nations.

Most egregiously, Vanity Fair called Watson’s speech a “game changer” for feminism: “Watson is potentially in an even better position than many of her peers,” writes Joanna Robinson. “Her role as Hermione Granger, the universally adored heroine of the Harry Potter series, gives her an automatic in with male and female millenials. This is a rare case where an actor being conflated with their role might be a good thing. In this way, her widespread influence on young minds (still forming their opinions on gender roles and advocacy) is even stronger than other high-profile defenders of the F-word like Beyoncé.”

Despite the slight toward Beyonce’s feminist work, I thought for a moment that Robinson and others who were anointing Emma Watson as feminism’s brightest young mind might have actually been right. There is something uniquely brave about a young woman identifying as a feminist, especially when so many others, like Watson’s contemporaries Shailene Woodley and Taylor Swift, shy away from the label.

But at the same time, when I hear this speech being discussed as a defining moment in feminism, I worry about the message that the He For She campaign sends to people who still aren’t sure that feminism is looking out for their best interests. More specifically, will He For She leave behind many of the people who most need feminsm’s help?

To begin with, the name “He For She” is problematic, no matter how you slice it. Some may call these criticisms divisive and nitpicky, but there is nothing feminist about a campaign that reinforces a gender binary that is harmful to people whose gender identities don’t fit into such tidy boxes. When we reinforce the idea that only people who neatly fit the gender binary are worthy of being protected and supported, we erase and exclude the people who are at most risk of patriarchal violence and oppression.

Which is something that Emma Watson knows only a little bit about. It was encouraging that Watson acknowledged some of the privilege that led her to that United Nations stage, but she failed to mention the things that are most important. She noted that her parents and teachers didn’t expect less of her than male students, but failed to mention how the automatic advantages that being white, wealthy, able-bodied, and cisgender have colored her life experience. The state of affairs for women that Watson presents in this speech is a best case scenario. There was no discussion in this speech as to how He For She can improve the lives of women and nonbinary people who will experience intersectional oppressions, like racism, transphobia, and fatphobia.

This is not to suggest that what Emma Watson did wasn’t brave. Women face consequences when they speak up on feminism, as evidenced by the internet trolls who threatened to release nude photos of Watson shortly after her speech (luckily this turned out to be a hoax). Anyone who uses their platform to spread feminist ideas deserves respect, but we should probably be a little more careful in who we choose as our thought leaders. Especially when there are hundreds of women who are directly impacting the lives of women through their work and writing.

In reality, Emma Watson is the kind of woman that mainstream feminism — the feminism that gets a place on the United Nations’ stage — has worked the hardest for. When Watson speaks of equal pay, she’s talking about the white women who make 78% of their white male counterparts, not the 46% gap that Latina women face in the workplace. When we discuss sex work, we don’t talk about the transgender women who rely on the industry to survive. Put simply, the discussion that He For She and Emma Watson are having fails to invite the people whose voices need to be heard most to the table.

Of course, the most crucial component of the speech is Watson’s call to action for men that support equality. “Unintentional feminists,” she calls them. These, of course, are men who have been “turned off” by their own assumptions about what feminists are. Men are an important component of breaking down barriers for women, but after years of begging from feminists of all ideological backgrounds, they shouldn’t need a verbal engraved invitation from an actress to get involved. More importantly, there is little discussion of how the men who support He For She will actually stand in solidarity with women.

Many men who consider themselves vocal advocates for feminism have also had a real problem with talking over the women they’re supposed to be supporting. The space of male allies in feminism is a tenuous one, and one that is only successful when male allies use their platforms and privilege to amplify the voices of women, trans men, and nonbinary people. Instead of “He For She,” perhaps the campaign should have been branded “Stand With Women,” to imply that men would be standing beside women instead of standing up for them. Women don’t need to be rescued, whether it’s by men, Emma Watson, or the United Nations. Positioning men as the saviors of oppressed women isn’t productive, and devalues the work that feminists have been doing for decades.

Paying lip service to feminist ideas without actually doing any work to undo oppression isn’t feminist, and it certainly isn’t new. Every few months, it seems as if the media identifies an actress as the new young feminist darling, and Emma Watson is only the latest in the procession. Emma Watson may be making feminism more palatable for people who aren’t comfortable with in-your-face confrontations from less camera-friendly feminists, but she isn’t doing anything new or groundbreaking.

And it’s unfortunate that Emma Watson is selling the same boring, one-dimensional feminism that’s existed since the first hypothetical bra was burned instead of really changing it. She doesn’t deserve to have her privacy and body threatened by terrible internet trolls, but she also probably hasn’t earned her place as a defining feminist of her generation. If Emma Watson really wanted to be a “game changer,” she should have handed the microphone to Laverne Cox or Janet Mock to add some desperately needed diversity to the U.S.’s contingent of U.N. Goodwill Ambassadors.

Amy McCarthy is a freelance writer living in Dallas, Texas. 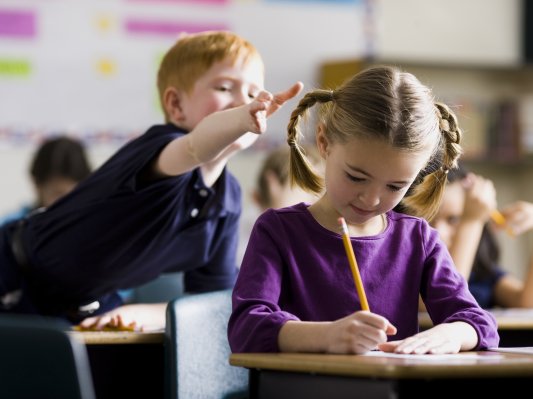 Raising Boys Not to Be Total Jerks
Next Up: Editor's Pick