The relatives of former San Diego Chargers defensive back Paul Oliver have sued the National Football League for wrongful death, claiming that concussions contributed to his suicide last year, the Associated Press reports.

Oliver’s wife and sons are also suing the Chargers, the New Orleans Saints and the corporations that own several helmet manufacturers, alleging fraud and negligence and accusing the NFL of glorifying the “brutality and ferocity” of football as a marketing strategy.

The lawsuit says the 29-year-old Oliver shot himself to death in front of his wife, Chelsea, and two sons last September at his home in Marietta, Georgia, after suffering “mood, memory and anger issues” associated with repetitive head trauma and that after his death, a doctor confirmed that Oliver had chronic traumatic encephalopathy.

In August, the NFL settled a concussion-injury lawsuit with thousands of former players that includes $675 million for awards to injured players, $75 million for baseline assessments, $10 million for research and $5 million for public notice.

According to the league, nearly three out of every 10 former players will develop debilitating brain conditions. 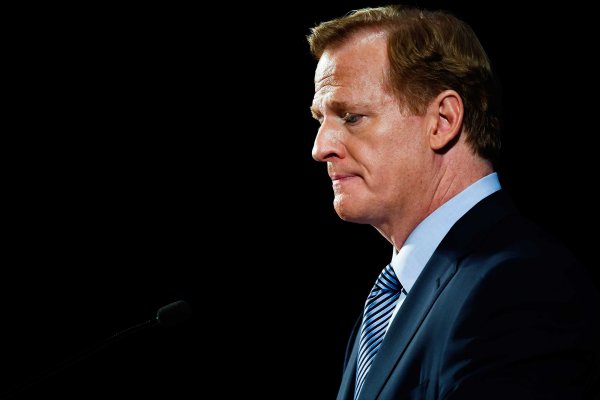 Roger Goodell Is the Committee Commissioner
Next Up: Editor's Pick