Iraq’s newly appointed Prime Minister Haider al-Abadi told CNN Tuesday he was “happy” that the U.S. and Arab coalition has joined the fight against ISIS.

But he warned that they must “do it right.”

“We have warned in the last two years: this is a danger,” he said, in one of his first international interviews. “It’s going to end in a bloodbath if nobody stops it and nobody was listening.

“They thought they were immune from this danger and only Iraq and Syria were on the spot of this danger but now I think we’re happy.”

Five Arab nations — Saudi Arabia, the United Arab Emirates, Jordan, Bahrain and Qatar — have joined the U.S. to fight the militant extremists who control vast swaths of Iraq and Syria.

Al-Abadi’s comments came after the coalition launched a series of strikes Tuesday against ISIS and Khorasan targets in Syria.

Sharing al-Abadi’s optimism, U.S. Secretary of State John Kerry told the U.N. General Assembly in New York on Tuesday that no country could just stand by and do nothing when faced with the ISIS threat.

“I’ve been very encouraged, as I think all of us engaged in this are, by everybody else’s cooperation, by the overwhelming unity and support for Iraq’s new government,” he said. “No civilized country can shirk its responsibility to stop this cancer from spreading.”

Al-Abadi had been instrumental in pushing the international community to expand its campaign against the militants into Syria. But he criticized Washington for not working closely with Iraqi ground troops fighting ISIS, CNN reports.

Al-Abadi must also attempt to mend the deep rifts in his own country between the Shi‘ite majority and the Sunni minority. “This is our country. And if we don’t work together, we don’t deserve a country,” he told CNN. 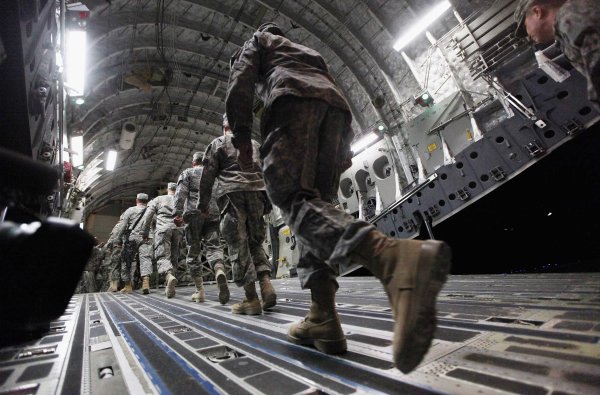 Former Defense Secretary: U.S. Should Have Kept Troops in Iraq
Next Up: Editor's Pick