In this Sept. 12, 2014 photo, Republican Senate candidate Scott Brown speaks during a campaign event at the University of New Hampshire in Durham, N.H.
Elise Amendola—AP
By Elizabeth Barber

Cosmopolitan is “picking brains over brawn” in the 2014 Senate race in New Hampshire: the magazine is endorsing not Scott Brown, its 1982 “Sexiest Man in America,” but his competitor, Democrat Jeanne Shaheen, the magazine said Tuesday.

“While we wish we could support the man who once posed nude in our pages, his policy positions just aren’t as solid as his abs were in the ’80s,” Cosmo said of the Republican candidate, a onetime Senator from Massachusetts who has decamped to the Granite State.

Cosmo added that Brown lagged behind incumbent candidate Shaheen in clarifying his positions on key women’s issues, including access to reproductive care.

“Brown said he disapproved of cutting family planning funding, but also supported a bill to defund Planned Parenthood,” Cosmo said. “And when reporters tried to ask him about his views on contraception access, he literally hid in the bathroom to avoid answering the question.”

In June 1982, Cosmo ran a two-page centerfold of a beaming, naked Brown, the winner of its “Sexiest Man in America” contest and then a 22-year-old law student at Boston College.

Two decades later, when Brown was a Senator and running for re-election in Massachusetts (he lost to the liberal Elizabeth Warren), Cosmo again lauded him as looking “pretty damn good for his age,” quipping “Vote for Brown. He Has One Hell of a Stimulus Package.”

Polls in New Hampshire have shown a tight race between Shaheen and Brown, who appears to be buoyed by the state’s discontent with President Barack Obama. 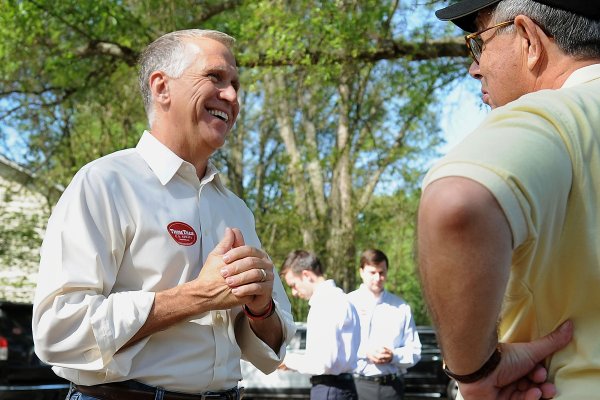