The abortion drug Mifepristone, also known as RU486, is pictured in an abortion clinic February 17, 2006 in Auckland, New Zealand.
Phil Walter—Getty Images
Ideas
By Quinn Cummings
Quinn Cummings is a writer of three books, Notes From the Underwire, The Year of Learning Dangerously and Pet Sounds. Her articles have been published in, among others, The Atlantic, The Wall Street Journal, TIME, The Huffington Post and Good Housekeeping. She is a passionate animal lover, an indifferent housekeeper and would eat her own hand if you put salsa on it.

You are a parent. Your 16-year-old daughter comes to you. She’s pregnant. You assure her you will support her in whatever decision she makes. She takes a few days to think and comes back to you. She’s not ready for a child; can you take her to a clinic?

The nearest clinic is 75 miles away and the laws of your state require women seeking abortions to first receive counseling and wait 24 hours before returning for the procedure. A first-trimester abortion costs between $300 and $600 on average. You work as an aide at an assisted-living center, and your daughter doesn’t have health insurance. You and your husband share one car. You aren’t in a position to take time off or stay overnight in a motel on top of paying for the abortion.

Jennifer Whalen doesn’t have to imagine this situation; this is her story, as told to Emily Bazelon of the New York Times. Whalen’s initial reaction was to call a local women’s center on her daughter’s behalf but she was told no one there could help. With no options in her community, and hamstrung by a “wait law” specifically legislated to inconvenience women seeking an abortion, Jennifer and her daughter searched online and found a site with misoprostol and mifepristone—medications she had never heard of before—available for $45.

“I read all the information,” Whalen told the Times. “They said these pills would help give a miscarriage, and they were the same ones a doctor would give you.” She had no idea that buying them without a prescription was illegal.

Jennifer’s daughter took the pills as instructed. She began to feel stomach pains, so Jennifer took her to the ER. Because she wanted her daughter to get the best medical care, she told the doctor about the pills. Not long after, Jennifer awoke to a knock at the door; the police officers had a search warrant and found the empty misoprostol and mifepristone boxes.

Rebecca Warren, the Montour County district attorney, charged Whalen with a felony and three misdemeanors in Dec. 2013. In order to be able to work again once she got out of jail (she’d have lost her job at the assisted-living facility had she pleaded guilty to the misdemeanors), she pleaded guilty to the felony and was sentenced to nine-to-18 months in jail. She has just begun serving her sentence. Her youngest child is 11.

Abortion is legal, in theory. In practice, 87% of counties in the United States don’t have a single abortion provider, as of 2012. For those people for whom the fetus is a viable human being whose needs outweigh every other person in the equation, this is a victory. Jennifer, her husband and her three children might disagree. They might also note that these laws disproportionately punish the working class, people for whom “family planning” is more than just a catchphrase. If you can’t afford a night at Motel 6 and two days off work, how exactly are you going to manage the costs associated with an extra child?

Making abortions illegal doesn’t make them go away, and a decade of insidious legislative maneuvering isn’t going to change that. Since there has been an understanding of what pregnancy means on a biological level, human beings have been coming up with methods to end some of these pregnancies and most of these methods are risky, some life-threatening. But when someone is desperate, risk looks different. A stranger telling you to lie on a kitchen table, or drink this bottle of turpentine, or a friend whispering to you to just insert this wire and –– 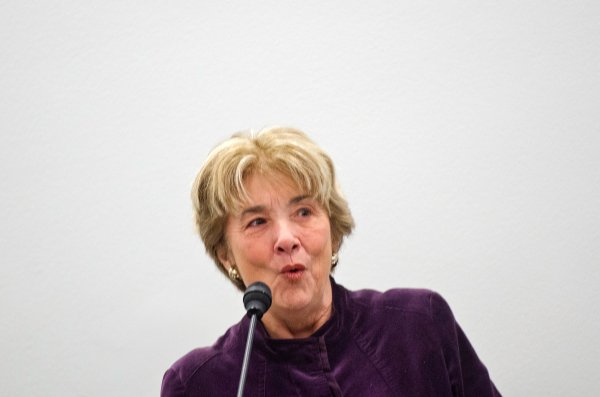 A Veteran Campaigner Reflects on 20 Years of Fighting Domestic Abuse
Next Up: Editor's Pick