CDC: Cases of Ebola Could Double Every 20 Days

If Ebola conditions continue without a scaled-up effort, the CDC estimates that cases of Ebola in West Africa will double every 20 days — and in an absolute worst-case scenario without any intervention, numbers could reach 1.4 million by Jan. 20.

Using a new Ebola Response prediction tool, the CDC has published results that show that if current trends continue unimpeded, Liberia and Sierra Leone will have approximately 8,000 total Ebola cases, or 21,000 if the tool accounts for underreporting, by Sept. 20. Liberia will account for about 6,000 of those cases.

The numbers are frighteningly high, but it should be noted that it’s a prediction of a hypothetical situation in which absolutely no intervention were to happen. That won’t be the case if many countries and the UN keep their promises. The model also shows that a big response could turn the outbreak around. In another hypothetical situation, the outbreak could ease up and eventually end if 70% of people with Ebola are placed in medical care facilities, Ebola treatment units, or somewhere where transmission could be contained.

“The model shows that a surge now can break the back of the epidemic,” said Dr. Tom Frieden, director of the CDC, in a press conference. “The importance of implementing effective programs rapidly cant be over-emphasized. The cautionary finding of the modeling is the enormous cost of delay.”

During the press conference, Dr. Frieden said the outbreak is very fluid and changing, but that he does not think West Africa will meet their worst case scenario predictions. “If you get enough people effectively isolated, the epidemic can be stopped…Even in dire scenarios, if we move fast enough we can turn it around. I do not think the most dire circumstances will come to pass,” he said.

The CDC report comes out on the same day the World Health Organization released their reports on the outbreaks at six months in all affected countries, and it appears that cases in Nigeria and Senegal have stabilized “for the moment.” Last week, President Obama announced a deployment of 3,000 U.S. military personnel and over $500 million in defense spending to go to West Africa, and the UN announced a new task force called the U.N. Mission for Ebola Emergency Response. The hope is that an exponentially increased response will prevent these possible scenarios. 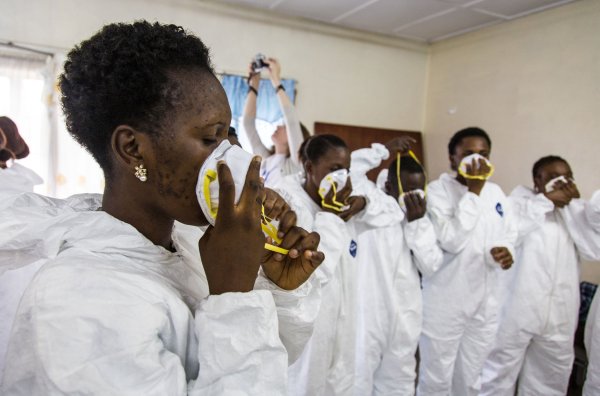 WHO Warns of Ebola 'Catastrophe'
Next Up: Editor's Pick