Pictures of killed British tourists David Miller and Hannah Witheridge and a message of support to their friends and families are displayed during special prayers at Koh Tao island on Sept. 18, 2014
Sitthipong Charoenjai—Reuters
By Charlie Campbell

The brutal murder of British tourists Hannah Witheridge, 23, and David Miller, 24, on the Thai resort island of Koh Tao, has reverberated around the world.

Beach cleaners discovered the Britons’ naked bodies 20 m apart by rocks on idyllic Sairee Beach on Sept. 15. A bloodstained garden hoe, commonly used by beachside bars to dig fire pits, was found nearby and has now been confirmed as the principal murder weapon, along with a wooden club.

The existence of two weapons has “made us believe that there are at least two attackers,” the deputy national police chief, Police General Somyot Pumpanmuang, told reporters Monday.

Witheridge died from severe head wounds while Miller died from blows to the head and drowning, according to the Thai forensics department. Although there were signs of sexual activity, investigators have not ascertained whether Witheridge was raped.

Thai police initially blamed Burmese migrant workers (“favorite targets,” in the words of Paul Quaglia, a Bangkok-based risk analyst). “Thais wouldn’t do this” pronounced a leading policeman, and officers started rounding up Burmese laborers for interrogation and DNA tests. Stricter rules for hiring migrant workers across the archipelago were introduced in the wake of the killings with astonishing speed.

But when no evidence emerged to pin the murder on any Burmese, the focus shifted to other outsiders: Western friends of the victims. The spotlight fell on British tourist Christopher Alan Ware, who shared a room with Miller, with police hinting at “a crime of passion.” Ware was arrested at Bangkok’s main airport with his brother James. It turned out that the latter had left Koh Tao the night before the murders and so was above suspicion. DNA tests on a cigarette butt found at the scene have now cleared the former.

Next, suspicion turned to a pair of Thai men that Sean McAnna, a 25-year-old Scottish friend of Miller’s, claims to have witnessed molesting Witheridge on the night before she was killed — an altercation from which she was apparently rescued by Miller. McAnna, a busker well known on Koh Tao as Guitarman, took a photo of the Thais and uploaded it to the Internet, after which he began receiving death threats. He has now apparently fled into hiding in fear for his life.

Police revealed that the two Thais had been interviewed but were released after refusing to provide DNA samples.

“The problem is all the distractions,” Quaglia tells TIME. “The police are getting a lot of not only domestic media coverage but also international, and are under pressure to make statements about progress.”

The case of Witheridge and Miller has, once again, laid bare the dichotomy between Thailand’s palm-fringed islands and dark underbelly — immortalized in Alex Garland’s 1996 dystopian novel The Beach. Drugs, rape and assault are an unfortunate consequence of Thailand’s reputation for hedonism, and the criminal elements it attracts.

Thailand receives over 20 million tourists each year, drawn by the pearl-white beaches, stunning temples and sumptuous food. The vast majority of them have safe and enjoyable holidays, but a few are not so lucky. A quick scan of English-language news portals for the booming resort of Pattaya — one of the country’s most popular destinations — reveals a shocking litany of muggings, phone snatchings, shootings, stabbings, fatal car crashes, drownings, and more, all involving visitors. Sexual assault and rape, much of it unreported, bedevil Koh Phangan’s world famous full-moon parties.

But far from attempting to address the issues of visitor safety, Thai army chief General Prayuth Chan-ocha, the nation’s self-appointed Prime Minister following a May 22 military coup, has stoked outrage by pointing fingers at the victims. “We have to look into the behavior of the other party [Witheridge and Miller] too,” he said.

In a separate address, for which he has since apologized, he said that tourists “think our country is beautiful and is safe so they can do whatever they want, they can wear bikinis and walk everywhere.” The general even suggested that the only tourists who should feel safe in bikinis were those who were “not beautiful.”

He didn’t mention the fact that eight days after the killing of Witheridge and Miller, not a single suspect has been identified or remains in custody. But nobody familiar with Thailand’s feeble justice system is surprised by that. 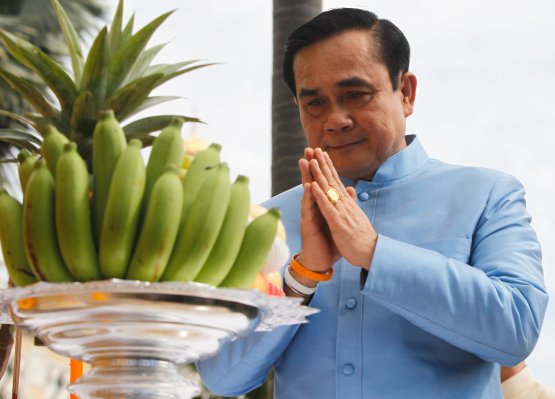