Trouble Is Brewing in the World's Biggest Gambling Hub

Like gambling enclaves everywhere, Macau is awash in neon light. But if the lights seem to shine just that bit brighter here than elsewhere, that’s because this Special Autonomous Region of China — made up of a small peninsula, two islands and a chunk of reclamation on China’s southern coast — is the world’s richest gaming hub by far, and looks set to get even bigger.

Macau is the only place in China where casino gambling is legal (horse racing on a lavish scale takes place just across the Pearl River estuary in Hong Kong). That makes this onetime Portuguese colony the darling of international gaming juggernauts: it has 35 casinos in just 29.5 sq km (11.4 square miles). Last year, gaming companies, including global heavyweights Wynn Resorts and MGM Resorts International, took in more than $45 billion here, about seven times more than they did in Las Vegas.

Naturally, all the trappings of money are here, or will be — from designer boutiques to expensive Russian prostitutes to what will be the world’s largest fleet of Rolls Royce Phantoms, destined for a high-roller hotel that will open in 2016 with a presidential suite priced at $130,000 a night, and invitation-only jewelry stores where items will start at $1 million each.

But where there are a few people with a lot of money, there tend to be many discontented others without it, and Macau is no exception.

Among ordinary Macanese, widespread dissatisfaction with how the enclave’s government has handled numerous social issues — from income inequality to lagging rights for casino workers — has fueled a yearning for a government that is “accountable to us,” in the words of Jason Chao, the president of a fledgling pro-democracy group, the Open Macau Society.

Over the past few months, Macau has fairly rumbled with discontent, witnessing an unprecedented number of protests that signal what some observers believe is the beginning of a slow revolt against the status quo, where Beijing holds all the political cards.

“People are beginning to realize that the government is depriving them of the rights they deserve,” said Chao. “We are still in the early stages of change, but change is happening.”

Macau returned from Portuguese to Chinese sovereignty in 1999, and, like China’s other Special Administrative Region of Hong Kong, is governed under the so-called “one country, two systems” principle.

The “two” part allows Macau’s citizens considerable freedoms not available in China. But the “one” part grants Beijing lordship over Macau’s political affairs, including the vetting of members of the committee that elects the city’s leader — a mayor-like role that bears the fittingly corporate title of Chief Executive.

So, on Aug. 28th, Macau’s 400-member electoral committee, comprising mostly Beijing loyalists, re-elected Fernando Chui as Macau’s Chief Executive. The ballot only had his name on it.

Macau’s democratic camp would like a Chief Executive directly elected by universal suffrage in 2019 — but in a town of reckless gamblers, nobody’s betting on it. Macau’s miniconstitution, known as the Basic Law, neither promises universal suffrage nor does it even guarantee election by committee. Beijing, if it wants, can sidestep the whole pseudo-election process and simply conduct local “consultations” to appoint a Chief Executive, the law says.

Unsurprisingly, democrats are poorly represented at the political level. The current 33-seat legislature (only 14 of which are elected) has just two democrats and two independents.

“The rule of law is not very good in Macau,” is how Bill Chou explains the historic weakness of the opposition. Chou is the vice-president of the New Macau Association, the city’s leading opposition group and a former political-science professor at the University of Macau. His contract was not renewed this summer after he faced disciplinary action for allegedly imposing his views on students. (The university denies Chou was sacked for his political beliefs and says it supports academic freedom.)

“In order to do business, and in order to have a career, you have depend on the goodwill of the government,” Chou says. “So people are very reluctant to take on the government. They don’t think they are powerful enough to challenge it.”

But things do seem to be changing. This spring, some 20,000 people protested a law that would have heaped lavish benefits on government retirees, while significant infrastructure issues in Macau went unaddressed. It was the largest demonstration in Macau in years and forced Chief Executive Chui to postpone consideration of the bill.

Then, in August, activists organized an unofficial referendum on prospects for democracy: Do you want universal suffrage in 2019, participants were asked, and, do you have confidence in the government? The government condemned the poll as illegal, detained the organizers, including Chao, and shut down the polling stations. (Polling continued online, however, where almost all of the 8,688 Macanese who took part supported universal suffrage and a huge majority declared their lack of confidence in the Chief Executive).

Meanwhile, almost a dozen protests have been held this summer by casino workers protesting low wages and benefits packages. About a quarter of the workforce is employed in the gaming sector: white croupier shirts can be seen drip-drying on the washing lines outside many a Macanese apartment.

“People are just starting to complain because they can see all this wealth that Macau is making, and, of course, it doesn’t trickle down to the population,” says Eric Sautede, a former professor at Macau’s University of St. Joseph, who was fired in June over his antigovernment views. “Macau is very successful, but there are problems.”

Those problems are mainly related to Macau’s transformation into a place that belongs to visitors, but not to the more than 600,000 people who live here. Macau has just one public hospital and a miserable public-transportation system. Though casino employees’ salaries have doubled since 2003, such an increase seems meager against casino revenues that are 11 times higher than they were a decade ago, says Lei Kuok-keong, vice president of the Forefront of the Macau Gaming, an independent labor union founded two years ago. Meanwhile, the average price of housing in Macau rose to $12,202 per sq m in June, up more than 29% from a year earlier, according to government statistics.

“I’m pretty sure that the central authorities [in Beijing] are aware of these inequalities and know that they could translate into something that could really grow out of hand,” said Sautede. “Macau’s government has this habit of dragging, of waiting. It has no courage. If it continues to do nothing, it could precipitate some kind of opening for change.”

Before Macau elects its next Chief Executive in 2019, the city will have squeezed in at least two new casinos: in three years, SJM Holdings, the oldest casino operator here, will open the Lisboa Palace, a Versailles-themed casino connected to three hotels, including one designed by Karl Lagerfeld; meanwhile, Louis XIII Holdings Ltd., of the Rolls Royce Phantoms, is also building an eponymously named casino resort promising “unsurpassed levels of luxury.” Both Sands and Wynn resorts, which already have sprawls in the territory, also have plans to add new hotel-casino complexes.

In August, Chui’s acceptance speech struck a contrite tone — perhaps betraying an awareness that social unrest here is growing. “In retrospect, many social problems could have been resolved more expeditiously and effectively,” said Chui. He also promised to “resolve the social injustices caused by the domination of a single industry,” according to the South China Morning Post.

But frustration has so far continued.

Last weekend, hundreds of casino workers gathered near the Grand Lisboa, an SJM casino and a skyline hog that bears an unusual resemblance to a prize-winning vegetable, overgrown to misshapen proportions. Protesters, shouting and carrying pickets, wore black T-shirts and demanded better wages and benefits. Across the public square, Calvin Klein models straddled each other on a billboard.

Alex Chan, a 29-year-old protester and SJM casino worker, hovered in the crowd, standing next to a mural of the Statue of Liberty. He was fed up with the casino, he said. But more than that, he said, he was fed up with government lassitude.

“The government always stands with the casino companies,” said Chan, who last month voted online for universal suffrage in Macau. But, he said, “I don’t think that the government cares about the people.” 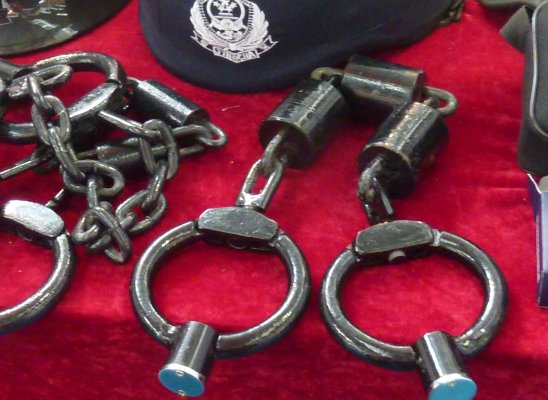 China Exporting 'Torture Devices' to Africa
Next Up: Editor's Pick