This Is Where I Leave You Review: When Papa Gets the Big Chill

“I don’t know why we don’t do this more often,” says youngest son Phillip (Adam Driver) of the rare, enforced reunion of the Altman family. His oldest brother Paul (Corey Stoll) explains, “Because we don’t like each other very much.” Also, because there are only so many times one of your parents dies. The four grown Altman children have assembled for the funeral of their father Mort, and their mother Hillary (Jane Fonda) has insisted they sit shiva — seven days of mourning to honor the departed — even though she’s not Jewish, and Mort was an atheist. The kids may be there under stifled protest, but Hillary has brought them home. “And you’re grounded,” she says.

Thirty years ago, The Big Chill convened seven friends of a dead man and confined them for a weekend of soul-searching and problem-thrashing. This Is Where I Leave You, scripted by Jonathan Tropper from his novel and directed by Shawn Levy, is that movie, with more Jews and an overbearing Mom who wrote pop-psychology books using her children as test cases. “Secrets are cancer to a family,” says Hillary, who recently acquired plastic breasts that peek out of her low-cut blouse like cantaloupes in the first stage of insurrection. She never considered that exposing family secrets to a million readers might be toxic to her children. But they are money to a movie that thinks we’d all be healthier and happier if we just aired our most painful loves and grudges.

Hear the Altmans roar or mewl. Judd (Jason Bateman): I found my wife Quinn (Abigail Spencer) in bed with my shock-jock boss (Dax Shepard). Now she shows up begging for forgiveness and announcing she’s pregnant. And my sister-in-law Annie (Kathryn Hahn), who was my girlfriend before she married Paul, has been trying unsuccessfully to have a baby and thinks I might have the goods for the job. Paul: I’ve been the dutiful son, running our father’s sporting goods store while my siblings escaped to actual, interesting lives. I’m also dutifully having sex with Annie, on the clock, to get her pregnant. Wendy (Tina Fey): My businessman husband Barry (Aaron Lazar) has little time for me. Does he notice I’m still pining for sweet Horry (Timothy Oliphant), my teen sweetheart who got brain-damaged in a crash of the car we were both in? Phillip: I’m the youngest; still am; won’t grow up. I’ve brought along my new, older, rich shrink girlfriend Tracy (Connie Britton) to show the family I can achieve something — or at least, some one.

Readers scanning the preceding précis may have skipped the particulars to admire the glittery names of the cast. Yep, the movie has rounded up the attractive veterans of many favorite TV shows — Saturday Night Live (Fey) and Friday Night Lights (Britton), Arrested Development (Bateman) and House of Cards (Stoll), Girls (Driver) and Justified (Olyphant) — for a big-screen sit-com-dram. O.K., most of them are unflatteringly shot, in cinematography that seeks out the age lines in the actors’ faces. But the characters they play are supposed to be grieving, both for their late father and for the hopes they might have harbored and are close to sinking.

How you approach This Is Where I Leave You — indeed, whether you come near it at all — may depend on your opinions of earlier films directed by Shawn Levy: the Night at the Museum series, the family comedies Cheaper by the Dozen and The Pink Panther, the ones about perplexed grownups (Date Night and The Internship) that used to be the custody of Ron Howard. If you are like most moviegoers, and you found those funny and charming, you’ll exclaim, “Oh, it’s a new Shawn Levy movie!” If you’re like most critics, and think the director has never committed a subtle or true moment to film, you’ll utter the same phrase but without the exclamation point, in the grousing tone of a middle-schooler unfairly given detention.

For a while, as Tropper’s screenplay lays out the family vectors and the actors sink gamely into their roles, Levy meets what George H.W. Bush once called “the soft bigotry of low expectations.” The this-isn’t-that-bad feeling can start mellowing into this-is-good. For that, credit Bateman, a superb underplayer and the all-time champ at conveying spiritual weariness. He has a lovely moment — literally, a few seconds — alone in the basement to which Judd’s mother has consigned him, when he blocks out the chaos upstairs by putting on a pair of headphones. In a family clucking over his cuckoldry, solitude is the only solace.

So often, though, the movie relies on shtick. Judd’s foldout bed, for example: because of poorly placed basement beams, it doesn’t completely fold out, yet Judd never thinks to remove the mattress and sleep on the floor. Or pretty, perky Penny Moore (Rose Byrne), who shows up early in the movie to offer Judd a miracle remedy for his woes. Or Wendy’s toddler, who’s apparently house-training himself and drags his port-a-potty into some embarrassing space whenever a quick laugh is needed. Or the big F-you argument in a hospital, in front of an entire team of Little Leaguers. The emotional revelations aren’t organic; they appear with the regularity of trip wires. And if a few viewers miss each heavily made point, Michael Giacchino’s music feels it for them. The Altman home might as well be a cocktail lounge with an overassertive piano player.

Once in awhile, a reviewer’s darkest suspicions about a film butt up against a sneaky pleasure in its incidental epiphanies. I confess to being conflicted. So put it this way: If the Altmans were a real family sitting shiva, I’d drop by to commiserate and give a cheek-kiss to a few of the mourners (Bateman, Driver, Fey, maybe Fonda). I enjoyed seeing them, but I’d hate to be sentenced to being with them for the full seven-day stretch. 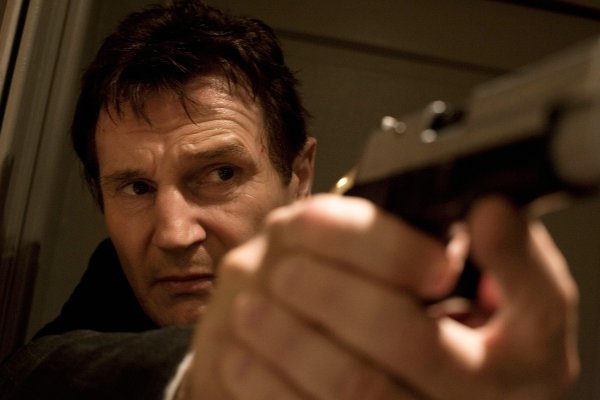 Liam Neeson's Most Badass Movies, Ranked
Next Up: Editor's Pick