Scotland Votes to Stay the Same, and for Change

Yes vote campaigners console themselves outside the Scottish Parliament building after the people of Scotland voted no to independence on Sept. 19, 2014 in Edinburgh, Scotland.
Christopher Furlong—Getty Images
By Catherine Mayer / London and Megan Gibson / Edinburgh

The U.K. remains just that, united. “I’m deeply disappointed like thousands across the country,” said Nicola Sturgeon, Scotland’s deputy first minister and a leading member of the Scottish National Party (SNP), which engineered the referendum. It was 5:30 a.m. and although the final tally had not been calculated, with 26 of 32 voting districts declared, the proponents of Scottish independence recognized defeat was now inevitable. Scots had voted by 55% to 45% in favor of retaining a status quo that has lasted 307 years.

So, a return to business as usual? Not after the surge in support for independence that today leaves almost half of Scotland, like Sturgeon, deeply disappointed. It will also taste bitter to independence movements across the world that had seen in Thursday’s referendum a model for their own efforts to shake free of a larger state. There is, said Sturgeon, “a clear appetite for change” and she’s right. Scotland may have opted for reform rather than revolution, but nobody who has observed the campaigns at close quarters believes this has given the U.K. government in Westminster a free pass to keep on keeping on as before.

For one thing, the three main Westminster parties — the ruling coalition of Conservatives and Liberal Democrats and the opposition Labour Party — came together to promise a greater devolution of powers to Scotland if voters agreed not to ditch the union. Now they must deliver. That means a new law by January 2015 expected at very least to give Scotland more control over taxation and social benefits.

There’s another reason change must come. Somebody has to figure out what to do with all that disappointment. Scotland’s largest city, Glasgow, voted by 53% to break with the rest of Britain. So did its fourth largest, Dundee. Before the polls even closed, Scots were worrying about the aftermath of the vote. Francesca Kelsey, a 26-year-old who runs a small clothing business in Edinburgh, told TIME of the deep divisions that the referendum has opened. “You need to have some sort of unity to go forward,” she said. It’s not clear how that unity will be restored — or by whom.

Because the reason so many voted for an independent Scotland and so many more were tempted to do so, even if they eventually chose the devil they knew, is that the British political system leaves many citizens feeling alienated and disempowered. Influence is concentrated in Westminster, in the hands of a political class that has lost the trust of many voters. And so as Scotland eyed independence, there has been a groundswell elsewhere in the U.K. for change, for greater autonomy for England’s regions and for Wales and Northern Ireland, and also for something else — a new kind of politics.

That realization prompted U.K. Prime Minister David Cameron toward an old political maneuver, outflanking his opponents. Early this morning he hailed the Scottish decision in a statement outside 10 Downing Street, pledging that further devolution for Scotland would be matched by similar moves across the rest of the U.K., including within England. “We have heard the voice of Scotland and now the millions of voices of England must also be heard,” he said. The problem for Cameron, governing in an uneasy coalition and facing a general election in May 2015, is that it may well prove impossible to achieve political consensus, and constitutional change, on such a tight schedule.

On Thursday, Kay Simpson, a 54-year-old teacher, voted Yes in Edinburgh’s Leith neighborhood. The polling station was packed. “People are inspired,” she said, gesturing to the packed polling station. “Whatever happens, we want that to carry on with.” Voter turnouts have been falling in the U.K. for decades. The prospect of a vote that could actually deliver change, rather than just speak in hopey-changey slogans, galvanized a nation. Voter turnout at the referendum was 85%.

The union may be safe. The status quo is not. 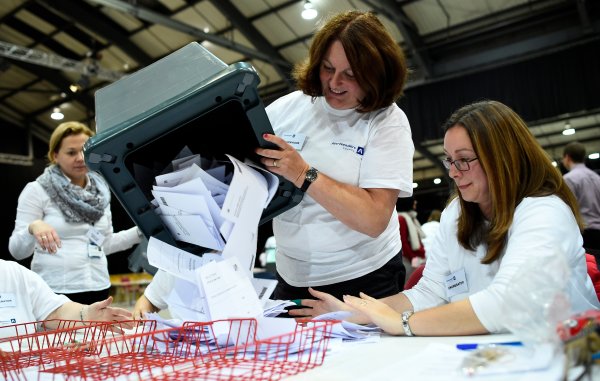 Scotland Rejects Independence in Referendum
Next Up: Editor's Pick