How Not to Apologize

When I was nine, my friend Debbie Levitt and I were at the community pool, doing silly jumps into the deep end. Two older girls were staring at us in a mean way, which we, in our naïveté, took as a challenge to make them laugh. We began upping the silly factor, sticking out our tongues and waving goofily at them as we leapt from the diving board. Later, in the locker room, they cornered us. “You think it’s funny to make fun of us?” one said. And she slapped me so hard across the face that she left a handprint.

Deb and I ran to tell a grown-up. The girls were brought to us and made to apologize. The one who had hit me stared into my face, gritting out “I. Am. Sorry.” Her squint, clenched jaw, and rigid demeanor made it clear that she was not, in fact, sorry. She added, “I only hit you because you’re older than she is.” (Deb and I were the same age. I was just taller. And, wait, no one should get hit, period! What kind of excuse was that?) The adult said to the mean girls, “I bet you learned your lesson, huh?” Mean Girl No. 1 smiled sweetly at him. “Yes.” Then she looked at us and whispered, “I bet you learned your lesson, too.” We did. We called Deb’s mom to pick us up, even though we usually walked home from the pool, and I pretty much stopped swimming after that. It was a lousy lesson for a nine-year-old to learn.

I never saw or heard from the scary pool girls again. But maybe their lesson in how not to apologize got imprinted on my psyche. Today, when I watch terrible apologies from public figures on the news, I think about those girls. They apologized only because they were collared by an adult wearing athletic pants and a whistle. Not so different, really, from celebrities and elected officials apologizing because a team of publicists told them that their popularity or endorsement deals would suffer otherwise. But here’s the thing: An apology that comes without a little soul-searching and a genuine acknowledgment of wrongdoing is not an apology at all.

These days I have kids of my own. I’m not a scared nine-year-old. (I even swim.) When my daughters were little, I made them apologize for Lego-throwing and refusing to share. I wanted them to develop the muscle memory of apologizing. Saying that you’re sorry is a skill you have to learn, like tying your shoes and pretending your grandmother’s gefilte fish is not disgusting. But as my kids got older, at around age six or seven, I stopped forcing them to drag the words out from some deep and resentful place in their diaphragms. There’s nothing worse than a grudging apology. Now that they’re tweens, I do not demand and plead for apologies in the heat of the moment. I may banish them to their rooms. I certainly let them stew. But I invariably wait until they’re calmer and quieter before bringing up the impact of their bad behavior on others. They usually know when they’ve messed up. (We’re Jews. We do guilt.) And they’re more willing to own what they did wrong after a little time to marinate in their own thoughts.

I’m not saying that apologizing is easy. (I’m also not saying that I’m some kind of amazing parent. Rest assured that my kids still horrify me with great regularity and vice versa.) Apologizing well is hard because pride and shame get in our way. Even when we want to apologize beautifully and generously, our wee brains hate acknowledging the fact that we screwed up. So we find ways to convey (implicitly or explicitly, consciously or unconsciously) that the other person is actually at fault. That’s what’s wrong with all those celebrity apologies; they don’t fully inhabit the offense that they’re putatively addressing. Every “Sorry if anyone was offended” or “Sorry I responded badly when I was provoked” is an instance of transferring blame to other people. And anytime you or I say, “Sorry for what happened,” we are (also) being weasels.

(MORE: What Do Your Fingers Say About You?)

In truth, the mechanics of good apologies aren’t difficult to understand. A bad apology is cagey and ungenerous, an attempt to avoid taking full responsibility. Good apologies are about stepping up.

The 12th-century sage Maimonides said that true repentance requires humility, remorse, forbearance, and reparation. Not much has changed since then. Basically, you must take ownership of the offense, even if it makes you uncomfortable. Name what you did, even if it makes you squirm. Employ the first person. (“I’m sorry that I kicked your Pomeranian,” not “I’m sorry that your dog got hurt,” or, worse, “I’m sorry that it was impossible to ignore the incessant yapping of your undersocialized feral hell beast.”) Acknowledge the impact of what you did. (“My lateness was disrespectful of your time and inconvenienced you on what I know was a busy day.”) Be real, open, and nondefensive. (“What I said was moronic and mean, and I’m ashamed of myself.”) Offer a teeny bit of explanation if it’s relevant, but keep it short and—this is key—don’t use it as justification for your actions. (“I was tired and crabby because I had to work late, but that’s no excuse for being nasty to you.”) There’s a distinction between an explanation and an excuse; an explanation gives a little backstory without justifying bad behavior. And never follow “I’m sorry” with “But you need to lighten up.” Apologizing to a friend and then telling her that she’s overreacting is like giving someone a delicious homemade cookie, then grabbing it back and stomping on it.

(MORE: 5 Types of Friends Everyone Should Have)

When you’ve said your piece, let the other person have his or her say. You need to listen and absorb, even if it’s uncomfortable. If the other person is clipped and abrupt but accepts your apology, say “thank you” and mean it. Don’t continue to plead your case or dispute his or her interpretation of events. And if he or she remains mad, well, you’ll have to sit with that for a while. Maimonides said that if your first apology isn’t accepted, you have to try three more times. If, after that, the person won’t forgive you, you can stop trying.

Finally, make reparations. Pay for the broken window or the dry cleaning, tell coworkers that the error was yours and not your underling’s, make a donation to the wronged party’s favorite charity. If you said something boneheaded, educate yourself about why your remark was offensive.

And, for heaven’s sake, never present yourself as the aggrieved party. You are not the hero of this story. That’s why you have to say, “I’m sorry that I did something hurtful,” not “Sorry if you were hurt.”

A good apology means laying yourself bare. It means putting yourself in the other person’s position, giving her what she wants and needs.

In short, it’s not about you.

About the Author
Marjorie Ingall is a cofounder, with Susan McCarthy, of the blog SorryWatch.com, which examines apologies in history, literature, and pop culture. She is working on a book about Jewish mothers. 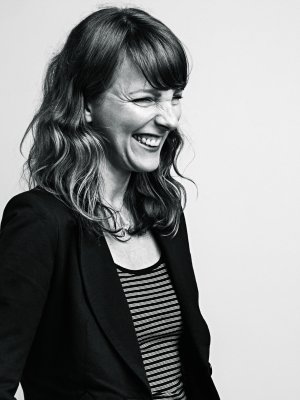 13 Things You Probably Don’t Know About Laughing
Next Up: Editor's Pick