My Dream After Fighting in Iraq and Afghanistan: To Play College Football

The noise is almost deafening.

No question about it — when you put 80,000 people in one place and unite them in purpose, they can shake a building (and the surrounding countryside) to its core. As I stand here now, at the top of Memorial Stadium, preparing to lead the Clemson football team on the long downhill run to Frank Howard Field — there’s a reason they call it Death Valley — I can feel the earth trembling beneath my feet.

I am at the front of the line, an unusual and somewhat disori- enting position for a first-year walk-on. But then, this is no ordi- nary day, and I suppose I am no ordinary college football player. For starters, I’m twenty-four years old, which makes me the old- est guy on the team, despite the fact that I’m only a freshman. I’ve spent most of the past six years in the military, serving tours of duty in Iraq and Afghanistan. Along the way I had the misfortune of being involved in the infamous Battle of Kamdesh, one of the bloodiest encounters in the Afghanistan conflict. I lost friends that day, and no amount of hardware (I received the Purple Heart and Bronze Star with Valor in the aftermath) can ever change that fact or make the memory any less painful. But I guess this is one of the ways I deal with it: by fulfilling a promise I made to a friend who died that day, on October 3, 2009.

“Someday, when I get out of this sh*thole, I’m going to play college football,” I had said, although I didn’t really know how I was going to make it happen.

And now here I am, dressed in orange, padded up, at five-foot- eight, 175 pounds, the smallest guy on the Clemson football team. But no matter —ain’t the size of the dog in the fight, as they say. I’d be just as happy at the back of the pack, but today is unique. Not only are we playing Atlantic Coast Conference rival Virginia Tech, but it’s also Military Appreciation Day. As I wave the American flag at the top of the stadium steps, generic cheering and shout- ing give way to something more organized, something more pro- found:

I understand the reality of being a soldier in the modern army. I know that most people are deeply disconnected from the violent and exhausting work of the American military half a world away. I know that the patriotic chanting is a gesture soon forgotten. But you know what? That’s okay. It feels good now, in this place and this time, and I’m honored to be a part of it. There’s one other thing: it’s my father’s birthday. Ray Rodriguez, who was not just my dad but also my best friend, passed away shortly after I gradu- ated from high school. I was still just a kid when he died, and not a particularly ambitious or focused one at that. I can’t help but wonder how he’d feel if he were here now to share this day with me and to see the man that I’ve become. I like to think that he’d be proud.

Suddenly we’re moving, careening downhill, nearly a hundred strong, rolling into the stadium, into Death Valley. It’s a nickname, of course, and nothing more, signifying the supposed fate of Clemson opponents. I know the difference between Death Valley and the Valley of Death. I’ve seen both. Football is not war. Football is a game. But right now, for the moment, it’s enough. I’m lucky to be here. I’m lucky to be alive. I was given a second chance, and I plan to make the most of it.

Rodriguez is a decorated war hero and a Division I football player for Clemson University. He served tours of duty in Iraq and Afghanistan, rising through the ranks to sergeant. In 2009 he fought in the Battle of Kamdesh and earned a Purple Heart and the Bronze Star Medal with Valor. 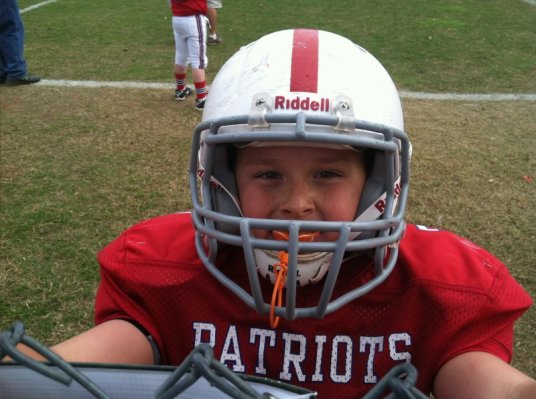 Why I Let My 9-Year-Old Son Play Tackle Football
Next Up: Editor's Pick