Victoria Claflin Woodhull (1838 - 1927), the first woman to run for US president from a nationally recognized ticket
Hulton Archive / Getty Images
By Jennifer Latson

These days, Hillary Clinton is making headlines as the potential female President of the United States — and she hasn’t even declared that she’s running. But, though a Clinton run would still be history-making, it was more than a century ago that the U.S. saw its first major-party female presidential candidate: Victoria Claflin Woodhull.

Woodhull — who was born this day, Sept. 23, in 1838 in Homer, Ohio — challenged Ulysses S. Grant in the 1872 presidential election as the Equal Rights Party candidate. Her bid was unsuccessful, and she’s mostly faded from history except as a frequent sidebar to articles about other women running for the highest office. (For example: TIME wrote about her in 1964 when Senator Margaret Chase Smith ran, and again in 1984 when Geraldine Ferraro ran for VP.)

Still, she campaigned with flair, publicly proclaiming her beliefs in, as TIME put it in 1964, “spiritualism, vegetarianism, short skirts, legalized prostitution, and free love.”

A suffragist whom other suffragists tended to keep at arm’s length, Woodhull was often described in terms her women’s movement peers might have eschewed: “beautiful,” “bosomy” and “not entirely scrupulous.”

She and her younger sister Tennessee got their start as healthcare practitioners of dubious merit, peddling elixirs, psychic healing and metaphysical remedies. One big sale was enough to launch the pair, however. TIME recounted how in 1984:

Woodhull used her earnings to start a newspaper, Woodhull & Claflin’s Weekly, which supported her political ambitions as well as her pet causes. It’s unclear whether her activism ultimately helped or hurt the women’s movement, but it certainly garnered attention. She was nothing if not dramatic:

When her fellow suffragists questioned Woodhull’s place in the movement, however, Stanton defended her. “If Victoria Woodhull must be crucified,” she said, “let men drive the spikes.”

As a presidential candidate, Woodhull was not quite crucified, but met an ignominious end on election night, which she spent in jail on an obscenity charge. 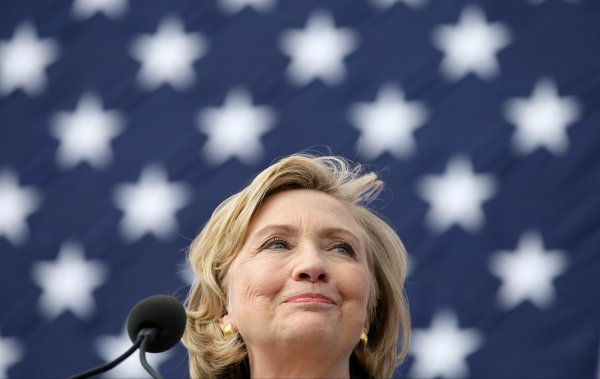 Hillary Clinton Calls for a Women’s 'Movement'
Next Up: Editor's Pick