It’s no coincidence that the logo of Shonda Rhimes’ production company, ShondaLand, is a roller coaster built around a heart. Fast, sexy and entertaining, her prime-time sagas are twisty, funky constructions built of licorice whips and cotton candy. And like an amusement-park attraction, they could well come with a list of warnings: May cause narrative whiplash. Beware of injury from jaw hitting the floor. Management not responsible if you wear out the O, M and G keys on your mobile device.

Starting Sept. 25, Rhimes is extending the track on the ride, as ABC turns over its entire Thursday-night lineup to her. Beginning at 8 p.m., viewers can belt in and experience the familiar ups and downs of Grey’s Anatomy, the open-heart medical drama entering its 11th season. At 9, the train picks up speed and corkscrews into the political shockfest of Scandal. And at 10, it plunges into the darkness of her newest production (created by Scandal co-executive producer Pete Nowalk), a morally murky defense-law drama fittingly called How to Get Away With Murder.

That Rhimes commands an entire night on a major network puts her in the ranks of superproducers like David E. Kelley, Steven Bochco and Aaron Spelling. That she’s done it as an African-American woman is echoed in the casual diversity of her shows. And she’s achieved all this by figuring out a way for network drama to thrive in a challenging era: with smart, pulpy shows that emote like pop ballads, look like America and run like hell.

Rhimes, a former movie screenwriter, began her empire with a traditional kind of TV hit. Grey’s was a type of hospital drama we’d seen before–as on ER, there were entanglements and dramatic, violent cliff-hangers–but it established Rhimesian trademarks like its multicultural cast and rapid-fire, playful dialogue. The show coined the nicknames McDreamy and McSteamy for two hot docs and popularized the anatomical term vajayjay (to evade censors who somehow had no problem with the word penis, Rhimes has said).

Grey’s was an instant hit, and spin-off Private Practice ran for six seasons. Another medical drama–Off the Map, about doctors in rural South America–lasted only 13 episodes in 2011. But her next show, Scandal, was about distinctly different kinds of operators. Olivia Pope (Kerry Washington) was a Washington, D.C., crisis manager whose “gladiators in suits” made problems go away but who hid a scandal of her own: an affair with married President Fitzgerald “Fitz” Grant (Tony Goldwyn).

At first Scandal was not bad–but also not bad enough. The early episodes took pains to show that Olivia would not defend liars and the truly wicked; the show wanted to have its corruption and its likability too. In an age of bold cable dramas, it felt tentative, hemmed in by an invisible boundary on just how amoral network-TV protagonists were allowed to be.

Then in Season 2, Scandal crashed through that fence, becoming a gleefully batty thriller about the getting of sex and power. There were conspiracies and torture and election rigging; Fitz killed a Supreme Court Justice. Season 3 focused on Olivia’s estranged parents–Dad a black-ops agent, Mom a terrorist–turning the show into a quasi-spy thriller à la Alias. This wasn’t a soap opera; it was friggin’ opera, full stop, replete with blood, betrayal and rent garments. Left and right, it broke rules about the kinds of ethical lines that sympathetic network characters can cross.

And it worked. We still rooted for Olivia, thanks to the emotional hooks and Washington’s tough but raw performance. As on CBS’s sophisticated The Good Wife, the possibility that characters we liked were capable of bad things made them more appealing, not less, and made the plots both more surprising and more believable (at least psychologically). Olivia and Fitz’s affair made sense exactly because of their flaws: her, dedicated but damaged; him, charismatic but petulant.

Scandal took elements of prestige cable dramas like Mad Men and Homeland–conspiracy, depravity, morally shady characters–but swapped the moodiness for unabashed glee. It enjoys being bad, swinging through its bloodiest moments with a soundtrack of ’70s soul: “Superbad,” “Papa Was a Rollin’ Stone” and–of course–“Love Rollercoaster.”

At the same time, Scandal figured out how to keep its audience in an age of constant distraction. Rhimes’ aesthetic is acceleration–and not just in that the plots are fast and crazy but that they’re always getting faster and crazier. (That sensation is underscored by the segues between scenes, blurs of rapid images set to a camera-shutter sound effect.)

TV shows have long used twists and cliff-hangers to hold viewers between episodes; Scandal realizes that today you need to hold them every second. It sometimes seems to be composed less of episodes than of individual WTF? moments. (Last season, for instance, the First Lady revealed that she was raped by her father-in-law; one of Olivia’s gladiators licked another’s face before pulling out one of her teeth for treachery; and Olivia’s mother chewed through her own wrists to escape imprisonment.) But that keeps the tweets flying, which has made Scandal one of the most social series on TV, a fact credited with helping kick its ratings up more than 40% last year.

And if Rhimes’ shows reflect how viewers watch TV today, they also reflect how a 21st century audience looks. They’re matter-of-factly diverse, in color, in sexual orientation and in combination. (Both Scandal and Murder have interracial couples at their center.) They don’t shout their inclusiveness, but TV is listening. ABC has several new comedies about families of color this season, which network chief Paul Lee has characterized as simply good business. And after Washington became the first black female lead in a network drama since the 1970s, more African-American women now star and co-star in several dramas.

One of them is Viola Davis, who presides over Murder as Annalise Keating, a defense attorney and professor who terrifies prosecutors nearly as much as she does her students. In her first scene, she strides into the show like a cruise missile in heels, warning her law freshmen, “Clearly your karma is out of balance to get assigned to my class.” Keating is incisive, blunt and–maybe most radical for the portrayal of a middle-aged black woman on network TV–sexually powerful: an early scene finds her reclining back on her desk, a man kneeling in front of her, his attention clearly focused on something other than legal briefs.

Murder is a sort of Paper Chase meets The Secret History. Keating has students assist her on actual cases, in a competition to be chosen to work for her firm. (The contest involves, reality-show-like, an “immunity idol.”) But it’s a dangerous sort of extra credit, as we learn in a flash-forward that finds the students, months down the road, frantically trying to dispose of a dead body.

The scene shows, if you hadn’t guessed this from the title, that Murder is not going to waste time trying to be nice. That’s promising. The first case-of-the-week is fairly routine, though, and there’s too much hand-holding, including several flashbacks to scenes we watched minutes before (maybe on the assumption that we were staring at Twitter the first time).

But the overarching story–how we got from the first day of school to ditching a corpse–is more interesting, as is the larger question of what Keating and her students won’t do to win. If this law-school drama can learn Scandal’s lessons without simply copying its homework, it could combine a slow-burn thriller with the kind of rapid-fire OMG moments that make each airing a communal event in ShondaLand. After all, who wants to ride a roller coaster alone?

The original version of this story incorrectly stated how many episodes of Off the Map were broadcast. It was 13. Also, the last name of a character on How To Get Away With Murder was incorrectly stated. It is Keating. 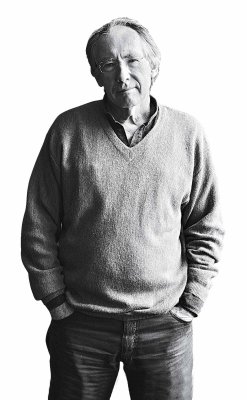 10 Questions With Ian McEwan
Next Up: Editor's Pick