Why the World’s Most Powerful Leaders Really Love India

Some of the world’s most important people are wooing India’s new Prime Minister Narendra Modi like teenage boys drooling over the homecoming queen. Less than a month ago, Modi was feted in Japan on his five-day official visit, during which he even received an unexpected hug from usually stiff Japanese Prime Minister Shinzo Abe. This week, Modi is hosting China’s President Xi Jinping, who upon his arrival in the country on Wednesday, proclaimed that Beijing wishes “to forge a closer development partnership and jointly realize our great dreams of building strong and prosperous nations.”

Why has Modi become so popular? The reason can be found in how Asia is changing, politically and economically. Ever since China’s paramount leader Deng Xiaoping launched his country’s remarkable economic miracle in the early 1980s, the old Cold War divisions in the region melted away amid increasing economic integration. According to the Asian Development Bank, trade between Asian countries accounted for 50% of their total trade in 2013, up from 30% in 1985. But with China flexing the political and military muscles it has acquired from growing wealth, Asia is becoming split into two camps once again – one centered on China, the other on the U.S. and its allies, including Japan, South Korea and the Philippines. Each side is looking to bolster its support in the region in order to gain leverage on the other. Tokyo, embroiled in a tense stand-off with Beijing over disputed islands in the East China Sea, is looking to build a network of allies to “contain” a rising China. Meanwhile, Beijing is aiming to create a power bloc of its own in the region to counteract U.S. influence.

India has become a key wild card in this new geopolitical power game. As a rising power in its own right, and a huge potential source of new business in everything from espressos to expressways, whichever side manages to lure New Delhi into its orbit will tilt the scales in its favor.

Both camps are making their best pitch. Japan’s Abe took the unusual step of traveling from Tokyo to the historic city of Kyoto to personally welcome Modi to the country. Xi ventured all the way to Modi’s home state of Gujarat on this visit, even donning an Indian-style vest. Abe sent off Modi with a promise of $33 billion of new investment. Xi is reportedly planning to top that during his India visit, dangling an even bigger package of $100 billion.

On purely economic grounds, you’d think Xi has an advantage in his quest for Modi’s favor. Trade between the two has exploded, to nearly $66 billion in 2013 from a mere $1.2 billion in 1996. Their economic links will likely continue to strengthen as Chinese companies become more and more important global investors and Chinese consumers more and more important customers. The world’s two most-populous nations would appear to have many economic interests in common as well. Their companies, accustomed to operating in an emerging economy and selling to emerging consumers, are attracted to the potential of each other’s markets. China’s Xiaomi, for instance, has successfully lured Indian customers to its cut-rate smartphones as it has in China. Wouldn’t Modi be wise to hitch his country to the world’s rising power, rather than Japan, a declining one? That would bring to life the economic power of what’s been termed “Chindia.”

But China-India relations are more complicated than that. After India’s independence in 1947, Prime Minister Jawaharlal Nehru thought his new nation would find a friend in newly communist China. The spirit of the times was captured in the phrase Hindi Chini bhai-bhai, or “Indians and Chinese are brothers.” That hope was dashed, however. India has incensed China by allowing Tibet’s Dalai Lama, who Beijing considers a dangerous separatist, to reside in exile in India. Modi, in fact, invited Tibet’s prime minister-in-exile to his inauguration in May. Relations are also continually roiled by border disputes. In 1962, the two fought a nasty border war, and the causes of that conflict linger to this day. The two countries contest land along their border in India’s far north in Ladakh, while China claims India’s eastern province of Arunachal Pradesh. China perennially irritates India over these unresolved issues. Just last week, only days before Xi’s much-heralded visit, India charged that Chinese troops are building a road in the contested territory in Ladakh. In talks with Xi on Thursday, Modi urged the Chinese President to finally resolve their border disagreements.

Such tensions are clearly weighing on Modi’s mind. He has apparently embarked on a mission to upgrade India’s military capabilities and relationships. Abe and Modi during their recent summit agreed to strengthen military ties, and in August, New Delhi and Washington pledged to do the same during U.S. Defense Secretary Chuck Hagel’s visit to India. One of the first economic reforms Modi announced after becoming Prime Minister was easing restrictions on foreign investment into India’s defense sector, a move aimed at bolstering its technology and production capacities. It is an open secret who is the target of all these military moves. While in Japan, Modi took a swipe at an assertive China when he told business leaders in Tokyo that “everywhere around us, we see an 18th century expansionist mind-set: encroaching on another country, intruding in others’ waters, invading other countries and capturing territory.”

Modi, then, is attempting to have his halwa and eat it, too — playing off both sides to win as many goodies as he can. In his quest to restart India’s economic miracle by building much-needed infrastructure and boosting manufacturing, Modi will need all the money he can get — from China, the U.S., Japan and anyone else who is offering. India has always been wary of trying itself too tightly into any one political camp — during the Cold War Nehru was the leading figure behind what was known as the “nonaligned movement.” The question is how long Modi can play one side off the other. We may find out soon enough. Later this month, Modi will travel to Washington to meet with President Barack Obama. Let’s see what goodies he picks up there. 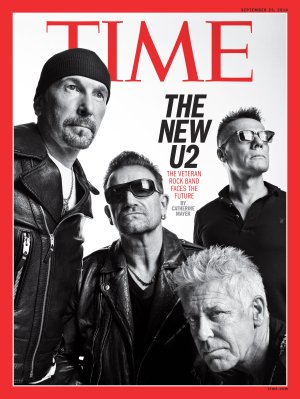 Exclusive: U2 and Apple Have Another Surprise for You
Next Up: Editor's Pick