Indian police try to prevent exiled Tibetan youths from advancing as they protest against a visit to India by Chinese President Xi Jinping outside a hotel in New Delhi on Sept. 18, 2014
Chandan Khanna—AFP/Getty Images
By Rishi Iyengar

Chinese and Indian troops remain locked in a border confrontation that shows little sign of abating, even as Chinese President Xi Jinping kicked off his three-day visit to India on Wednesday.

Indian news channel NDTV reported that a large number of Chinese troops crossed about 5 km into the Chumar sector of India’s Ladakh region. The reported incursion prompted India to send three battalions to bolster its border presence, less than 24 hours after a meeting between the two countries to diffuse the issue.

“There is an ongoing situation,” an army headquarters official told Reuters.

According to local media, Indian Prime Minister Narendra Modi brought up the incursion in his meeting with Xi on Thursday morning, but no details have emerged.

Relations between India and China appear to have remained positive despite the long-simmering border conflict, with Xi and Modi signing 12 pacts and China promising investments to the tune of $20 billion over the next five years.

“India and China must carry forward friendship and deepen respect,” Xi said Thursday in New Delhi, where his arrival was marred by vehement protests against the Chinese government’s rule in Tibet.

Tibet has been another historic bone of contention between the two countries, with China unhappy about India’s 1959 decision to grant the Dalai Lama asylum.

In a joint press conference after their 90-minute meeting, both leaders spoke of the need and desire to resolve the border issue quickly while carrying forward their rapidly expanding economic partnership.

“There should be peace in our relations and on the borders. If this happens we can realize the true potential of our relations,” said Modi in Hindi, stressing the need to clarify the Line of Actual Control that both countries perceive differently.

Xi, who spoke after Modi, attributed the border issues to long-standing historical disagreements, but said the two nations have made “steady progress” in resolving them and will continue to do so. He said China is determined to work with India to settle the border issue as soon as possible.

New deals signed between the two leaders include major Chinese investment in Indian railways, industrial parks in Gujarat and Maharashtra and potential civil nuclear cooperation. “China and India will act as twin engines in spearheading economic growth in the region,” Xi said. 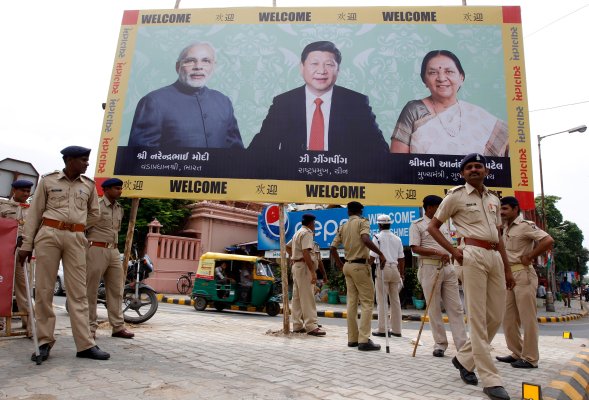