A slight figure in jeans, backpack slung over her shoulder, runs up and down the touchline, shouting instructions to 11 girls chasing a ball. Loud Bollywood music wafts from the edges of the pitch, where cheering spectators have taken shelter under tents in the late monsoon rain. It is Aug. 15, 2013 — the 66th anniversary of India’s independence. The theme for the local celebration is women’s empowerment, and that’s what Dooars XI, a women’s soccer team from Jalpaiguri district of West Bengal state, is playing for. “When I see they are struggling, I join the game,” says Bhabani Munda, the team’s player-coach. “Otherwise, I like to cheer them from the sidelines.”

Munda is not one to seek the spotlight. But this 24-year-old has been quietly challenging the social norms in West Bengal’s hilly tea estates since the 1990s, when she got together with a few friends to form the area’s first women’s soccer team. A player since she was 7, Munda wanted to do something uplifting for local girls who, as often is the case in India, lag behind males economically and socially. UNICEF estimates that nearly 55% of women in West Bengal are married off before they turn 18, higher than the national average of 43%. Female literacy in Munda’s Jalpaiguri district, one of India’s most backward, is 52%, compared with 73% for men. “Women’s place in society in these areas has always been shaky,” says Munda. “[The team] is trying to bring about a change in this attitude through our example.”

Munda has become an inspiration in an area where girls are usually sent to work in the tea estates as children, then married off young. Her own life could have followed the same course. “My parents and brothers stopped me from playing football, saying I would break a leg and then no one would marry me,” she recalls. “I would wake up at 3:30 a.m. to finish my morning chores and then sneak out to play before anyone woke up.” In 1995 she watched the Bengal women’s professional soccer team on TV — the sport is big in the state. “I was awestruck,” Munda says. “I had a sense that what they were doing was important, and I wanted to do that too.”

Eventually, Munda started Dooars XI (dooars means doors and is also the name of the Himalayan foothills) — and went head-to-head with old prejudices. The first challenge she faced was getting permission from the parents to allow their daughters to play. The second: persuading the parents that the girls should play in shorts. “I wore shorts to convince them it was not that scandalous,” she says. The villagers called her “brazen” and “shameless.” Braving their censure — and later moving out of her family home when her brothers locked her up to dissuade her from playing in a tournament — Munda has continued to defy stereotypes. In 2006, when a policeman tried to molest her, Munda hauled him by his collar and pinned him up against the wall. “Since that day, no one has dared lay a finger or raise a catcall against me or my girls,” she says. She and the team go out in the evenings alone — something that would have been unthinkable a decade back. “We can protect ourselves, and all the men in the village know and respect that.”

Life for the team has changed in other ways too. Before, the Dooars XI played barefoot; now they wear sneakers donated by district officials. Private clubs are now sponsoring matches for special occasions and offering prize money of about $50 to $100. Usha Oraon, Dooars XI’s 19-year-old goalkeeper, can now pay for her 7-km bus and auto-rickshaw commute to college. And Shakuntala Oraon (unrelated to Usha), a team member who has made it to West Bengal’s under-19 women’s professional team, dreams of qualifying for the national side, bagging a government job under a sports quota and becoming the breadwinner for her family. “We don’t have a toilet in our home,” says Shakuntala. “When I establish myself as a footballer, I want to build one.”

The members of Dooars XI have gradually won over the local community. The Kalchini tea estate is a sprawling plantation that provides jobs to some 2,000 workers — but when it temporarily closed in 2005, leading to widespread poverty, Munda and her team donated some of their tournament winnings to pay for the funeral of a local girl who died of hunger, and bought food for the family. They continue to donate prize money to families in trouble. Because Munda insists that her teammates study — she herself is doing a correspondence course in English — parents are more encouraged to send their daughters to school. Sunil Kumar, headmaster of the Kalchini Hindi High School, where Munda works as a cleaner, says, “The girls here come up to us asking if we can get her to coach them too.”

Finding money to keep the team going is getting harder. In addition to covering daily expenses, Munda has to repay a $900 loan that she took out to build a clubhouse, where she also sells tea and snacks to supplement the team’s income. That’s why her day doesn’t end with the closing of the clubhouse shutters. Munda lives in a small, thatched two-room cottage with three teammates. From 9 p.m. until midnight, amid the trophies Dooars XI has won, Munda makes snacks to sell the next day. If she sells them all, she can make about $2. “Every little thing counts,” she says. “I don’t know what the future holds. I don’t know how long I can run. But I am never giving up.” 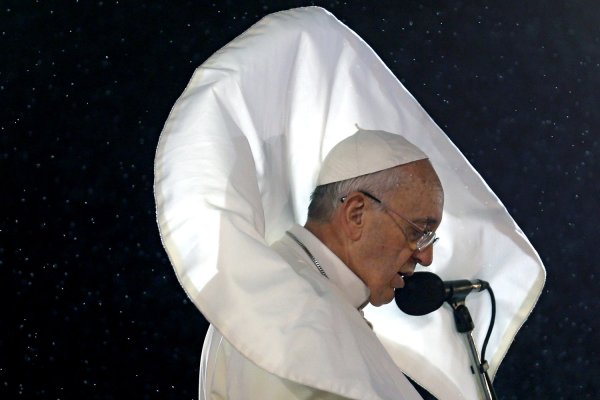 The 4 Reform Themes of Pope Francis in New Interview
Next Up: Editor's Pick