Ukrainian President Petro Poroshenko, right, talks with Prime Minister Arseniy Yatsenyuk in Kiev, Ukraine, on Sept. 10, 2014. Poroshenko promised on that day to introduce to parliament as early as next week a bill that would offer greater autonomy to rebellious regions in the pro-Russia eastern regions, where separatists have been battling government troops for almost five months
Andrew Kravchenko—AP
By Per Liljas

Russia has welcomed a new Ukrainian law granting autonomy to separatist-held eastern regions as “a step in the right direction,” the Wall Street Journal reports.

“We hope that all provisions of the law will be implemented responsibly,” Russia’s Foreign Ministry said, according to the Journal. Moscow then warned that attempts “to cancel it or change its essence will renew the confrontation in the southeast.”

Ukraine’s parliament passed the legislation on Tuesday, together with a law granting amnesty to many of the pro-Russian rebels involved in the five-month insurgency in the Luhansk and Donetsk regions. Ukrainian President Petro Poroshenko has defended the law, which gives the two regions three years of virtual self-governance, guarantees their right to use the Russian language and grants them increased control over their economies.

However, many politicians in Kiev are unhappy, saying that the move is unpatriotic. Poroshenko’s leading political opponent, Yulia Tymoshenko, a former Prime Minister, said she would challenge the new legislation in court.

“It is still not too late to go back to a pro-Ukrainian, patriotic position and veto these two laws,” she said, according to the Journal.

On Thursday, the Ukrainian President is expected to request military and economic assistance from the U.S., as he addresses the Congress and meets with President Barack Obama. The Europe and Central Asia director of Human Rights Watch (HRW), Hugh Williamson, has urged the U.S. Administration to press Poroshenko’s government to “meet its obligations to protect all civilians” in return.

“Russia’s role in the conflict is no reason for silence on violations by Ukrainian government forces,” Williamson said in a statement Thursday. “Ukraine’s closest friends have the most effective voices to speak with the Ukrainian leadership about human rights concerns, and the Obama administration shouldn’t miss this opportunity.”

HRW has documented serious violations of international humanitarian and human-rights law during the conflict, in which over 2,000 people were killed and over 3,000 injured. 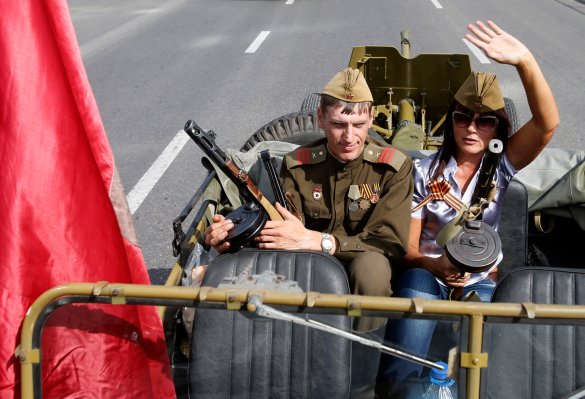